Commencement of the Class of 2019

Giving thanks to God, the trustees, faculty, and students of St. Vladimir’s Orthodox Theological Seminary (SVOTS) invite the public to the Commencement of the Class of 2019, Saturday, May 18. Ceremonies will begin at 2:00 p.m., with a “Prayer of Thanksgiving” in Three Hierarchs Chapel, followed at 2:30 p.m. by Commencement Exercises in the Metropolitan Philip Auditorium of the John G. Rangos Family Building.

The commencement speaker this year is Archpriest Alexander Rentel, SEOD, chancellor of the Orthodox Church in America (OCA). 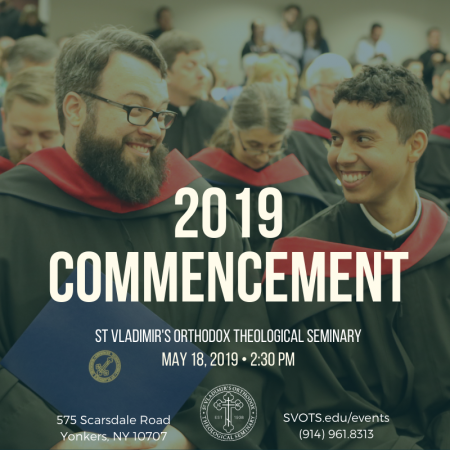 About the 2019 Commencement Speaker

The Very Rev. Dr. Alexander Rentel has served for many years as ecclesiarch, assistant professor in canon law and Byzantine studies, and the John and Paraskeva Skvir lecturer in practical theology at St. Vladimir’s Orthodox Theological Seminary.

A faithful priest of the OCA for seventeen years, Fr. Alexander possesses a wealth of experience and knowledge as a professor, liturgist, pastor, and confessor. His expertise in canon law is not only academic, but practical. On many occasions, he has provided canonical guidance and opinions to the Holy Synod on a variety of subjects, and he has been called upon to consult in this area by Orthodox churches around the world.  Fr. Alexander is widely known and respected by the many seminarians who have studied under him.

Father Alexander, an alumnus of St. Vladimir’s Seminary (SVOTS), received his B.A. in English from The Ohio State University in 1990. He received his M.Div. from SVOTS in 1995, and finished his doctoral dissertation under the direction of Fr. Robert Taft, SJ, at the Pontifical Oriental Institute in Rome in 2004.

Prior to Fr. Alexander becoming an instructor at St. Vladimir’s Seminary in 2002, he was a Junior Fellow in Byzantine Studies at Dumbarton Oaks, Washington, D.C. in 2000-2001. He was ordained to the priesthood in July 2001. In October 2018, the Holy Synod of Bishops confirmed Fr. Alexander as Chancellor of the Orthodox Church in America.

Summer Music Institute: Unity in the Church through Song

Whether you are a beginner or an experienced musician, enhance your craft and immerse yourself in hymns from the Slavic, Byzantine, Coptic, and Georgian chant traditions this June, at the 2021 St...