Equip Yourself to Better Serve & Lead 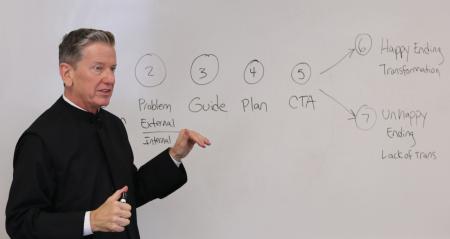 The Master of Arts (M.A.) degree concentration in Orthodox Christian Leadership Studies is intended for those seeking to better serve their local parish or larger church community, as well as exercise Christian leadership in the workplace. The hybrid program offers distance-learning, rather than the traditional, in-person education provided in the other M.A. concentrations, and is normally completed in four years by part-time students taking two courses per semester. Students in this concentration will complete most of their studies remotely through online learning, and will gather on campus in Yonkers, NY for onsite intensives for one week each semester.

Students in this concentration will complete most of their coursework remotely through online learning, and will gather on campus in Yonkers, NY for onsite intensives for one week each semester. During the onsite intensives, students also participate in the seminary’s residential experience. On occasion, various outside speakers will offer seminars in areas of their particular expertise and experience.

Distance learning will include:

Students are admitted as a cohort and remain in the cohort as they progress through the program. The cohort system is intended to foster a sense of community and strengthen cooperation among the students.

The program will take four years to complete. Students in the Orthodox Leadership Studies concentration are required to take 15 courses (45 hours of instruction per course, plus 90 hours of homework) and complete a summative thesis for a total of 48 credits. That amounts to 2 courses (6 credits) per semester.

Students in the Orthodox Christian Leadership Studies concentration will study Scripture, church history, patristics, and theology from noted scholars of St Vladimir’s faculty. Additionally, instructors for leadership courses will introduce students to the principles of Christian servant leadership and offer instruction on building leadership teams, creating vision and change, engaging projects and programs, financial planning and management, and inspiring generosity. Each student will complete the program by working on a capstone project with one of the leadership faculty, who will serve as project advisor.

Protodeacon Peter M. Danilchick is a frequently invited speaker on Christian leadership to a wide array of Orthodox jurisdictions and organizations. He has served domestic and overseas parishes and missions of the Orthodox Church as a deacon for over forty-five years, and is presently assigned to St. Mary Orthodox Church, Falls Church, VA (OCA Romanian Episcopate). He is also a retired ExxonMobil executive with over three decades of international operations, planning, and management experience, including as President, Exxon China Petroleum & Petrochemical Company; Vice-President, Planning, ExxonMobil Asia-Pacific Ltd.; and Director, Planning and Economics, Esso Central Europe. Protodeacon Peter currently serves as Trustee Emeritus of St. Vladimir's Orthodox Theological Seminary, a member of the Secretariat for the Assembly of Canonical Orthodox Bishops of the USA, and until recently was a member of the boards of FOCUS North America and the Orthodox Christian Leadership Initiative (OCLI). He continues to serve on OCLI’s Advisory Board. Protodeacon Peter is the author of Thy Will Be Done: Strategic Leadership, Planning, and Management for Christians (St Vladimir’s Seminary Press, 2016).

Deacon James Elliker is a passionate coach of both current and emerging leaders. He continues to study and explore leadership dynamics as organizational expectations continue to change. He is particularly drawn to the approach of servant leadership and its impact on others.

Deacon James' passion for helping others grow has been shaped through four decades of Human Resources, military, and community experience. He is currently president of Leading People, Inc., an adjunct faculty member in leadership, human resources, and student growth at Alvernia University, and a board member at the Literacy Council of Reading-Berks.  He completed his doctorate in leadership studies at Alvernia with a special interest in servant leadership. Deacon James also holds a master's degree in organizational leadership from Gonzaga University. He serves as a deacon at Sts. Constantine and Helen Greek Orthodox Church, Reading, PA.

Tatiana L. Hoff has built a career as an HR and communications professional, including with Deloitte Consulting and PepsiCo, and has advised and served organizations across industries to elevate employee experience through human capital, strategic communications, and transformation initiatives. She also has many years of experience in non-profit governance, including serving as elected member of St. Vladimir's Orthodox Theological Seminary's Board of Trustees for ten years.

Raised in the Orthodox Church, her connection with St. Vladimir's goes back generations. Hoff's maternal grandfather was in the second graduating class at St. Vladimir's (and later served for decades as a Trustee), and her father also completed his studies at the seminary in the 1970s. Each of them was later ordained, the former serving as a parish priest for over fifty years. She uses their examples of humility and selflessness to guide her own service to the church and to others.

Father Robert Holet served as pastor of St. Nicholas Orthodox Church (Ukrainian Orthodox Church of the USA) in Greenwood, VA, from its founding in 1998 until his retirement in 2020.  He also served on the Council of the Metropolia of the Ukrainian Orthodox Church of the USA and as director of the Consistory Office of Stewardship. Father Robert has also served on the Consistory of the Church, as the Treasurer of the Metropolia, and as an adjunct professor at St. Sophia Seminary (South Bound Brook, NJ) and St. Vladimir's Orthodox Theological Seminary.

The history and importance of stewardship in the Church was a particular area of interest for Fr. Robert's ministry. In 2006, this interest led to the completion of a Doctor of Ministry (D.Min.) degree at Pittsburgh Theological Seminary, focusing on the role of stewardship in Orthodox Christianity, with particular emphasis on the mission parish context. He has given numerous presentations to clergy groups, parishes, and Orthodox jurisdictional assemblies on topics relating to the biblical and theological practice of Orthodox stewardship. In 2013, this work was summarized in Fr. Robert's first book, The First and Finest: Orthodox Christian Stewardship as Sacred Offering (Authorhouse, Nov. 2013).

Deacon Michael Hyatt is the founder and chairman of the performance coaching company, Full Focus.

He has scaled multiple companies over the years, including a $250M publishing company with 700+ employees and his own leadership development company that has grown over 60% year over year for the past four years. Under his leadership, Full Focus has been featured in the Inc. 5000 list of the fastest-growing companies in America and in 2020 and 2021 the company was named to Inc.’s Best Work Places list.

Deacon Michael is also executive chair on the Board of Trustees at St. Vladimir's Orthodox Theological Seminary and host of the podcast, The Orthodox Leader. He has served as a deacon at St. Ignatius Orthodox Church, Franklin, TN since his ordination in 1987.

He is the author of several New York Times, Wall Street Journal, and USA Today bestselling books, including Living Forward, Your Best Year Ever, Free to Focus, The Vision Driven Leader, and Win at Work and Succeed at Life. He has been married for over 40 years to his wife Gail, has five daughters, and nine grandchildren.

Peter Tarhanidis, Ph.D., is a passionate steward empowering leaders and teams toward exceptional performance to advance the mission of a firm and society. He is a leadership and management expert with mastery across strategic customer focus, business planning, technology, and operational excellence. Tarhanidis is currently a director with Janssen Pharmaceuticals R&D, supporting the Global Medical Office, and was previously with Quest Diagnostics, PA Consulting Group, Johnson & Johnson, and The Metropolitan Museum of Art. He is also adjunct lecturer in professional studies at Columbia University and a religious education teacher at Holy Trinity Greek Orthodox Church, Westfield, NJ, where he also serves on the board and is a former president. Tarhanidis is a board director of the Orthodox Christian Leadership Initiative (OCLI).

Dr. Tarhanidis holds a Ph.D. in leadership, an M.B.A, and a B.A. in economics. He is also a certified project management professional.

In order to participate in the distance learning portions of the program, students will provide and maintain the following: