Building Orthodoxy in the “Desert” of Norway

Father Theodor Svane, a 2015 alumnus of St. Vladimir’s Orthodox Theological Seminary (SVOTS), is the priest in charge of The Annunciation of the Holy Virgin Mary Orthodox Parish (Archdiocese of Orthodox Churches of Russian Tradition in Western Europe, Moscow Patriarchate) in Bergen, Norway. In Norway, where Lutheranism is the state religion and people identify as being culturally Lutheran, it is difficult to convert to another faith. But in a recent interview, Fr. Theodor explains that Norwegians are hungry for a deeper Christianity and the ancient Church. He also talks about the challenges and rewards of building a mission parish in “the land of the Vikings.” His Matushka, Hanne, is a cultural anthropologist who teaches at a local university. They have two children, Simon, 10, and Filip, 5.

Q: Tell us about your mission parish.

FT:  Since our return from California and the U.S. in 2017 I have been the priest in charge over a mission parish in Bergen, Norway. Our mission is international, but our liturgical language is Norwegian. Thank God we already have many ethnic Orthodox parishes in Norway. However I believe it is very important that we establish Norwegian speaking parishes in addition to other ones. Many Norwegians are longing for a deeper Christianity and searching for the ancient Church. Starting a mission is hard work and it’s been three challenging but also rewarding years. Thank God we have been able to support ourselves through my work as a Navy Chaplain in the Norwegian Armed Forces.

We are currently renting a parish hall from a Lutheran church. Every weekend, we set up for Vespers Saturday evening and for Sunday Divine Liturgy and then we take everything down Sunday afternoon. On feast days falling on weekdays we often celebrate with the Romanian or Russian parishes here in Bergen. It is important for me to have good relationships with the other Orthodox parishes, and my brother clergy in town are good friends and supporters. We are in the same Church, united in Christ, but at the same time of different cultures and languages.

Q: What is the history of Orthodoxy in Norway?

FT:  The Orthodox Church in Norway has long roots. Norway was Christianized before the Great Schism and the Norwegians were all Orthodox, since both the eastern and western part of the Church was united at the time. Most of the missionaries came from western Europe, but also a significant current came from the east. For instance, the rulers of Norway were related to the rulers of Rus in Novgorod and Kiev. Many of the ruling class had ties in the east. Some of the kings who gave Norway Christian laws spent significant time in Russia. One of them was even nicknamed “the Russian.”

God can send anyone, and ironically it is the Vikings, well known for their savagery and paganism, who brought Christianity to Norway. While they were plundering and pillaging, but also trading and traveling across the medieval world, they encountered Christianity. Many of them became Christians and brought Christianity back to our shores. After the Great Schism, which happens at the end of the Viking era, Orthodoxy disappeared slowly as Norway is drawn under the authority of the emerging papal power of the Latin Church.

Orthodoxy later resurfaced again in northern Norway around the time of the Reformation, because Norway borders Finland and Russia. The stories of the Russian missionaries who came here resemble the life of St. Herman of Alaska. St. Tryphon was a Russian saint who came to Norway. Norway also has three Orthodox saints who lived during the Viking era: St. Sunniva, St. Olaf, and St. Hallvard. 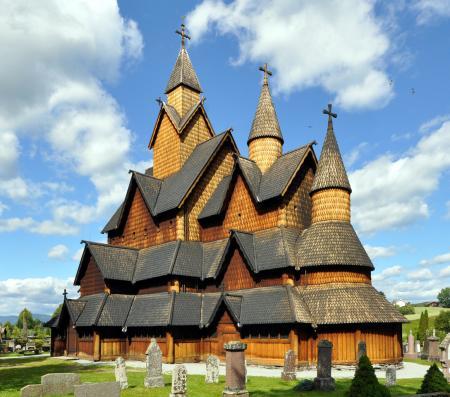 Q:  Is it difficult culturally to convert in Norway?

FT:  In Europe, religion, ethnicity, and culture are tied together more closely than in the U.S. The religion of Scandinavian countries has had and still has very close ties with the state and culture. In 1537, by decree, all Norwegians became Lutherans by law and anyone opposing this and holding on to the old ways would ultimately be expelled from the country.

The authority of the king replaced the authority of the pope. Religion, nation, and nationality merged. To this day the official name of the Lutheran State Church is the “Church of Norway.” Historically Scandinavians have been very homogenous, ethnically and religiously speaking, and in Norway we did not get full religious freedom until the 1960s.

For this reason a Norwegian often feels that they have to abandon their nationality if they join the Orthodox Church. This is a paradox since the Orthodox Church is the closest Christian church geographically speaking since we border Russia and Finland.

Q: How is your parish doing today?

FT: The community was established in the early 90s. I am the first resident priest of the mission and so far my main focus has simply been to get the services up and running on a weekly basis. We are growing slowly as you would expect for a small mission, but we will receive a catechumen into the church this fall and we have a few more coming down the pipeline. On a regular Sunday, before COVID, we would be between twenty and twenty-five worshippers.

Our mission is international, with people from all over the world. We have Japanese, Romanians, Russians, Ukrainians, Bulgarians, and Middle Easterners. The core are, however, Norwegian converts, and this is great. There is a danger if we become a parish of only converts, so I am very grateful for all the internationals that God sends us. People from Orthodox countries are less “heady” than converts from western Protestant countries. We need them because they have Orthodoxy in their bodies and not just in their heads. I pray that God will send us more cradle Orthodox who are excited about establishing a Norwegian speaking parish. 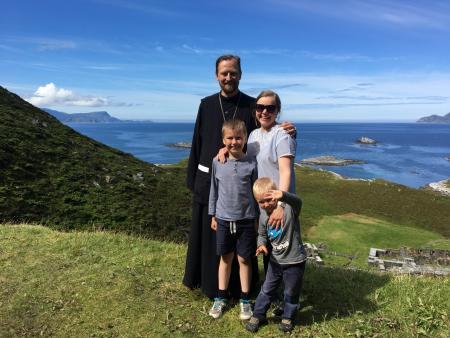 Q:  How did you become Orthodox?

FT:  I came to the Orthodox Church while studying theology part-time and working as a civil engineer. My parents were practicing Christians who gave me a traditional Norwegian Christian upbringing. However from my early twenties I was drawn to the Orthodox Church and had a long distance relationship with it, mainly through books (this was before we got internet). But at that stage I did not really consider it as an option for me, since I, like Norwegians in general, believe Orthodoxy to be a cultural expression of Christianity and thus something for people from Eastern Europe and the Middle East, but not for me. However when we lived for one year in Thailand, when my wife did her field research for her Master’s thesis in 2005, I realized that I had to do something with my relationship with the Orthodox Church. And as soon as we moved back to Europe we went on a pilgrimage to the Holy land and Syria, and from that point on there was no point of return. I was completely sold and felt that if I did not become Orthodox I would wither and die.

However the process took quite a few years because it was important for me and my wife to do this together. I am very grateful that we took the time.

At the time the Orthodox community in Bergen was very small and there were no resident priests. A priest would come once a month to celebrate the liturgy on Saturdays, and we would gather on Sundays to read the Typika service in between. I never dreamt of becoming a priest when I was young, but the thought emerged in my heart partly because I was seeing a need for a priest.

We moved to America because we realized we needed to immerse ourselves in an Orthodox community. You can read books on the Orthodox Church, but you will miss out on the essentials, because the faith is something we practice in a community as the Body of Christ.

Q: I understand you have started a building campaign.

FT:  Yes, I never thought we would start this early, but someone approached me just after Christmas and wanted to give us $20,000 if we established a fund. It is a challenge to find a place to worship. Our desire is to establish a viable Norwegian community by the grace of God. Having our own place to worship is a very important part in reaching that goal. A part of my long term dream is to build an Orthodox church inspired by our ancient Norwegian building traditions. Either a wooden stave church or perhaps a fusion of Russian/Byzantine and Norwegian stone church traditions.

Q: What is the state of Orthodoxy in Norway?

FT:  For more than ten years, Orthodoxy has been the fastest growing Christian Church in Norway. Our numbers have been growing because of immigration mainly from Eastern Europe, but also Norwegians are finding their way. It is a very typical growth challenge. We are lagging behind on infrastructure, clergy, choir directors, etc.

Our parish belongs to the Archdiocese of Orthodox Churches of Russian Tradition in Western Europe, which is a diocese with a long history in Western Europe and also has close ties to the Orthodox Church in America. The last couple of years have been very challenging for our diocese, but we are now very grateful to be reunited with the Russian Church to which we historically belong. I am eager and look forward to starting the work God has set us to do here.

Q: Tell me about your time at SVOTS.

FT:  We had a great time at St Vladimir’s. Our five years in the U.S., starting at St Vladimir’s followed by being an assistant priest in California, were the five best years of our lives. I can’t stress how important the formation that happens in the seminary community is. You can’t absorb the Orthodox ethos and way of life through reading, you have to live and practice it in a community. The childhood that we were able to give our kids was filled with so much joy and a lot of friends at the seminary campus. If I could find an excuse to go back and live there I would! But I know that God has called us to be where we are even though it sometimes feels like a desert compared to the situation in the U.S. Because we love the seminary, it was such a great joy and honor for us to host Fr. Chad Hatfield here in December as he was giving a retreat for us and inspiring us to be the Church sent to our own people. I am incredibly grateful for our time in the U.S., and for the ties and friends we have been given. We are always delighted to receive visitors and friends in the land of the Vikings.