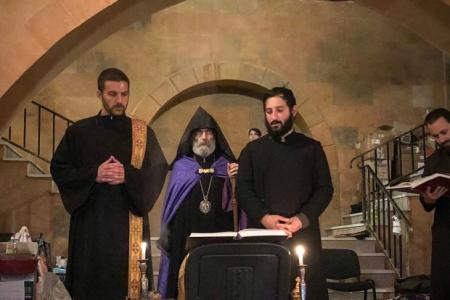 After fighting erupted between Azerbaijan and Armenia in Nagorno-Karabakh in the fall of 2020, Dn. Ezras (Ryan) Tellalian felt compelled to travel to the war-torn land and “offered myself to the people.”

Deacon Ezras, an alumnus of St. Vladimir’s Seminary and member of the Armenian Apostolic Church, arrived in the region (known as “Artsakh” by Armenians) in mid-October. He travelled there with Michael Krikorian, a journalist who had worked for the Los Angeles Times for several years.

“I came not only as a photographer, but with my other identities as a psychologist and deacon….” Dn. Ezras wrote on the Fordham University blog, Public Orthodoxy. “I offered myself to the people, to help in whatever way I could, and am confident that God was leading me.”

While in the warzone, Dn. Ezras stayed in a shelter near a church with other civilians and clergy, including Archbishop Pargev, who ministered to them. At the shelter, clergy and laity prayed daily offices according to the Armenian Rite.

“What else could they do in such circumstances, but pray unceasingly?”

Deacon Ezras recounted on Public Orthodoxy how the people daily prayed for their suffering brethren as well as their enemies.

“We prayed prayed for our people in Azeri captivity, but also for Azeris, Turks, Syrian mercenaries—our malefactors, enemies, those who hate us and would torture us, those who might kill us at any moment. Can you imagine this?

“This is our faith. This is what we do as Christians.”

Deacon Ezras Tellalian is a Ph.D. student in clinical psychology at The New School for Social Research. He holds an M.A. in psychology from the same institution, an M.Div. from St. Vladimir’s Seminary (’09), and a certificate in Armenian Studies from St. Nersess Armenian Seminary. Deacon Ezras also worked as a staff member in various capacities at St. Vladimir’s, including IT. He is a fourth-generation Armenian-American, the great-grandson of genocide victims. His photography is available at rezras.com.