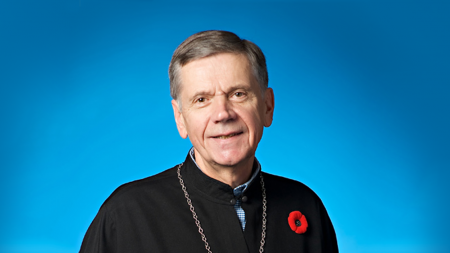 With faith in Christ and hope in the resurrection, we share news of the repose of Archpriest John Tkachuk, the founding pastor of the Sign of the Theotokos parish of the Orthodox Church in America (OCA) in Montreal, former chancellor of the Archdiocese of Canada, and retired U.S. Air Force chaplain. Father John fell asleep in the Lord on February 19, 2021 in Bronxville, NY, where he had been living in retirement. He was 76 and had been suffering from cancer.

Born in 1944 in Lodz, Poland to Archpriest Igor and Maria (Steblinksa) Tkachuk, their family fled Poland that year to Germany where Fr. Igor ministered to many persons displaced by World War II. Eventually, they immigrated to the United States with their children, John and Nina. Father Igor came from a part of Ukraine that later became part of Poland, and had served at the Cathedral Church of Saint Mary Magdalene in Warsaw.

Father John was educated at Iona College and Fordham University, receiving a Bachelor of Arts degree. He then completed studies at St. Vladimir’s Seminary and was awarded a Bachelor of Divinity degree in 1969. While at St Vladimir’s, he was a member of the 1965 Seminary Octet which toured the United States raising awareness of the Seminary’s mission.

In 1969, he married Mary A. Schmemann, daughter of Fr. Alexander and Matushka Juliana Schmemann. Soon after, he was ordained to the Holy Diaconate by Archbishop Sylvester (Haruns) of Montreal at the Chapel of St. Sergius in Lac Labelle, Quebec, Canada, and then to the Holy Priesthood by Metropolitan Ireney (Bekish) of New York at the Transfiguration of Our Lord Church in Brooklyn, NY. Father John and Matushka Mary subsequently served Three Saints Church in Ansonia, CT, and at Ss. Peter and Paul Church in Buffalo, NY.

In 1973, Father John was assigned to Ss. Peter and Paul Cathedral in Montreal, Quebec, Canada. During his tenure, Fr. John encouraged the use of English in the Divine Services. He was soon appointed secretary of the Archdiocese of Canada and was instrumental in organizing the 5th All-American Council in Montreal in 1977, at which Metropolitan Theodosius (Lazor) was elected as primate of the Orthodox Church in America.

In 1978, Father John and several families received permission from Archbishop Sylvester, then ruling hierarch of the Archdiocese of Canada, to form a new English- and French-language parish dedicated to the Sign of the Theotokos in Montreal. The new parish welcomed Orthodox believers of all national backgrounds. In their early years they met in humble rented quarters, then for many years in the basement of a Roman Catholic church. Finally, in 2000, “The Sign” acquired a spacious church building on the Boulevard Saint-Joseph, which remains its home.

Throughout his Canadian ministry, Fr. John held senior positions in the Archdiocese, serving as secretary, secretary-treasurer, and as the first chancellor. Among his many contributions to church life in Canada, Fr. John helped organize an annual retreat known as the Orthodox Theological Institute (OTI). Held over three days, OTI became a fixture of the Lenten calendar in Montreal and came to feature some of the most prominent names in the OCA as speakers. Matushka Mary also organized an annual conference of “Orthodox Christian Women of Montreal,” whose speakers included her mother, Matushka Juliana Schmemann.

Beginning in 1983, he served in the US Air Force Chaplaincy. He was a Reserve Chaplain at the Plattsburgh (NY) and Hanscom (MA) Air Force bases, which included active duty for several weeks every year. He proudly served in the chaplaincy for twenty years and retired in 2003 with the rank of major.

In 1990 he became the first chancellor of the Archdiocese of Canada and was awarded the Jeweled Cross in 1992. Before his retirement in September of 2013, Fr. John was awarded the Order of Saint Innocent (silver class) by the Holy Synod of Bishops of the Orthodox Church in America, in recognition of his forty years of priestly ministry.

Soon after retirement, Fr. John and Matushka Mary moved to Bronxville, NY, where they could be near their daughter, Vera; care for Matushka’s mother, the late Matushka Juliana Schmemann; and be near St. Vladimir’s Seminary. He was attached to Holy Trinity Church in Yonkers, NY.

In lieu of flowers, please consider making a donation to The Opioid Center of Support, a website founded after the death of Archpriest John’s grandson, Justin, of an overdose.

The schedule of services for Fr. John’s funeral is as follows:

May the memory of Archpriest John be eternal!