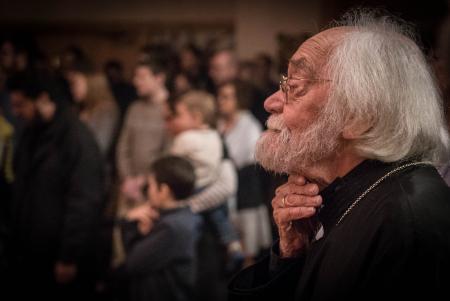 With faith in Christ and hope in the resurrection, we share news of the repose of Archpriest Sergei Glagolev, a beloved, pioneering English-language composer who was immensely influential in music and parish life in North American Orthodoxy. Father Sergei fell asleep in the Lord on the morning of September 1 at age 93.

The Very Rev. Sergei Glagolev was born on August 13, 1928 in Gary, IN, the son of Fr. Andrew and Magdalena Glagolev. Father Sergei attended St. Vladimir's in the late 1940s after World War II, when the Seminary was still located in Manhattan. He was also educated at Oberlin, Juilliard, and New York University. In 1951, he married Genevieve Brunarsky and was ordained a deacon the same year. He entered the ranks of the Holy Priesthood the following year.

Father Sergei contributed enormously to North American church hymnography, especially through the creation of English-language musical compositions with a uniquely American sound and the introduction of those pieces into Orthodox Christian parishes. He also taught music at St. Vladimir's, St. Tikhon's, and St. Herman's seminaries.

From the mid-50s of the last century when Fr. Sergei Glagolev was called to organize the first English-speaking Orthodox mission to the present day, he has pioneered the use of the English language in Orthodox liturgical services. This has often required that he compose music for those services.

Although not a few church composers and musicians have produced traditional ethnic church music set to English words, so many times the result has been a hybrid product that when used in worship services can be described as Greek or Russian services in English, but not English services. Father Glagolev pioneered the way for the composition of church music in English that truly sounds “English.” In his teaching he has always stressed the importance of the union of text and melody; music must not conflict with the syntax and rhythm of the language; and, on the other hand, the syntax of the text must not deny what the musical phrase is trying to say.

At his lectures of liturgical music at St. Vladimir’s Seminary, St. Tikhon’s Seminary, St. Herman’s Seminary; at liturgical institutes and at workshops presented all over the country, his teaching of Orthodox liturgy, worship, and liturgical singing has informed and inspired thousands of Orthodox faithful. In those lectures and talks he has always stressed the importance of sacred song, encouraging all to participate in liturgical singing, for, as he would say: “There is no more exalted activity human beings can engage in than to stand in the presence of the living God and to life up their voices to Him in prayerful, musically elevated utterance.”

Music that is used in Orthodox worship must also be able to reflect its liturgical use. Liturgical components—litany, psalmody, hymnody—in many ways dictate their musical form and function. I had the distinct pleasure and honor to have collaborated with Fr. Glagolev and Fr. Alexander Schmemann in creating and organizing the first summer Liturgical Institute of Music and Pastoral Practice at St. Vladimir’s Seminary in 1978. It was for several of these institutes that Fr. Sergei composed music that was based on considerations of both its poetic form and its liturgical function: the Vesperal Psalm Bless the Lord, Praise the Name of the Lord sung at Matins, and the Communion hymn The Righteous Shall be in Everlasting Remembrance, to name just a few. These compositions, using easily distinguished melodies, consonant harmonies, and rhythms that reflect spoken English, capture the spirit and joy of Orthodox worship and invite the assembled faithful to “join in.” Such settings employ the sound and the cadence of the English language as their starting point, yet remain true to the historic musical tradition of our faith. These are the models for congregational participation in Orthodox worship.

A person that God indeed has blessed with so many gifts and talents, Fr. Sergei has always used these gifts as a glorification of God Himself through his service to the Church—as singer, choral director, composer, and pastor. His love for people, his compassion and generosity that he was so capable of giving to all those who crossed his path, were a manifestation of his ability to see in each individual the face of Christ. Father Sergei Glagolev was truly a man of God and an inspiration to all of us who have been personally touched by his life, his teaching, and his love. 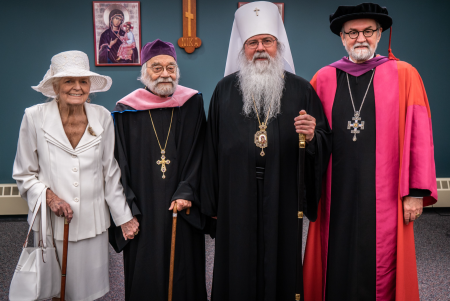 In recent years, St. Vladimir's Seminary honored Fr. Sergei on numerous occasions. On February 10, 2018, with Fr. Sergei in attendance, the St. Vladimir’s Seminary Chorale performed select compositions by him at the "Orthodox Masterpieces" event at Three Hierarchs Chapel. A few months later, the Seminary bestowed on Fr. Sergei the honorary degree of Doctor of Sacred Music. Most recently, in 2020, St. Vladimir's and the International Society for Orthodox Church Music (ISOCM) celebrated Fr. Sergei's life and work at their joint Pan-Orthodox Music Symposium.

May the memory of Archpriest Sergei be eternal!