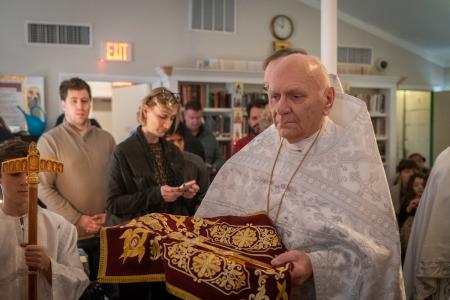 With faith in Christ and hope in the resurrection, we share news of the repose of Mitered Archpriest Michael Koblosh, an alumnus of St. Vladimir’s Seminary (’68). Father Michael fell asleep in the Lord in Alexandria, VA on the morning of August 18, 2021, following a battle with cancer.

The Very Rev. Michael Koblosh graduated from St. Tikhon’s Orthodox Theological Seminary in 1964 before pursuing a Master of Divinity (M.Div.) degree from St. Vladimir’s Seminary. He taught at St. Tikhon's in liturgical theology for many years during the 1970s.

Father Michael and his wife, Matushka Nadia, most recently served the mission parish of All Saints of North America, Alexandria, VA, and were integral to the beginning of the mission in 2008. They also served in a number of other parishes including Holy Trinity in East Meadow, NY; Sts. Cyril and Methodius Church in Terryville, CT; Holy Ghost Church in Bridgeport, CT; Christ the Savior Mission in Southbury, CT; and St. Nicholas Church in Whitestone, NY. During his time in Connecticut, Fr. Michael was dean of the Connecticut Deanery.

On January 5, 2020, Fr. Michael was elevated to the dignity of mitered archpriest in recognition of his decades of service to the Orthodox Church.

“He was a deeply faithful priest, who loved the Church with all his heart, and he served his flock selflessly until the very end,” said St. Vladimir’s Trustee Wesley J. Smith, J.D., who served at the altar as a subdeacon with Fr. Michael for more than four years. “As he slowly declined from cancer, he modeled how Christians can face the end of their earthly sojourn with good humor, steadfast courage, and deeply committed faith. He was a priest to the very last!”

Days before he reposed, when Fr. Michael could no longer attend church, he still insisted on writing the bulletin, in which he also included short reflections. Fr. Michael’s final bulletin reflected on the Feast of the Dormition, and fittingly looked toward the Kingdom:

On The Dormition—or “Assumption”—of The Mother Of God Scripture is silent about the death of the Mother of God. The story of that death is found in various apocryphal writings of the Early Church. There, we learn that upon her death she was “assumed” by God into the heavenly kingdom of Christ in the fullness of her spiritual and bodily existence. The silence of Scripture, however, is a “noisy silence.” The death and physical glorification of the Theotokos is the fulfillment of the whole Biblical story and of the death and resurrection of Christ. For what other reason did Christ come than to save us and to bring us, bodily, into His Kingdom? In His Mother, His suffering and victory find completion. And, because she is as human as we are, her glorification gives us a true and living icon of our own destiny in Christ. In Him and through His spirit, the resurrection and transfiguration of the world has begun. In the great Feast of the death of the Mother of God, the final resurrection of all and everything finds glorious and incomparably beautiful prefiguration. Her death has been described by a writer stepping outside of a dirty elevator and into a world full of nothing but joy, beauty, and infinite love. May such be the description of our deaths.

Father Michael is survived by his wife Nadia, and their daughters Larissa Chapin (Christopher) and Rebecca Edwards (Dr. Steven), as well as his grandchildren Jacob, Alexa, Noah, Zachary, and Andrew. He is also survived by his sister, Matushka Lydia Koblosh Westerberg (Mitered Archpriest Michael), as well as numerous close relatives, nieces and nephews, and loving parishioners and friends.

May his memory be eternal!