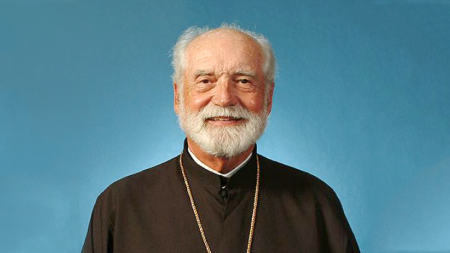 With faith in Christ and hope in the resurrection, we share news of the repose of Mitred Archpriest Basil Summer, who fell asleep in the Lord the morning of March 26, 2021, at the age of 95. Father Basil served as Director of the Fellowship of Orthodox Stewards (FOS) for the Orthodox Church in America (now Stewards of the OCA) from 1990-94 following his ministry as rector of St. Mark Church in Bethesda, Maryland from 1972 to 1989. He also possessed a deep and beautiful connection with St. Vladimir’s Seminary, enrolling at St. Vladimir’s in 1966 as a Lutheran and receiving chrismation in 1971 by the hand of Fr. John Meyendorff at the seminary chapel.

Born William Summer on January 28, 1926 in Waynesboro, PA to a devout Lutheran family, he was baptized in the Lutheran Church as an infant. After serving in the US Navy at the end of World War II, William attended Muhlenberg College, where he excelled in track and obtained a bachelor’s degree in history in 1949. He then enrolled at Lutheran Theological Seminary in Philadelphia, receiving a Bachelor of Divinity degree in 1952. After graduation, he embarked upon nearly two decades of ordained ministry in the Lutheran Church, which took him to parishes in several states. While serving a parish in Charleston, South Carolina, Fr. William (as he was then known) attended the Lutheran Federation Assembly in Helsinki, Finland. It was there that he discovered the Orthodox Cathedral located near the Lutheran Cathedral.  Enthused by his first encounter with the Orthodox Church, he decided to continue exploring the Orthodoxy through the Greek Orthodox Church in Charleston. He continued to be inspired by the Orthodox faith and deepened his knowledge.

A particularly memorable incident that Fr. Basil recounted with some emotion in recent years occurred when he was a Lutheran pastor in Charleston that also spurred a major step on his road to Orthodoxy. One Sunday, he welcomed an African-American family to services at the church. The parish council vehemently rebuked Fr. William for his action and unanimously opposed such integration in the congregation. Father William promptly resigned as pastor. He then requested a leave of absence from his bishop in order to enroll at St. Vladimir’s Orthodox Theological Seminary in New York in 1966, where he was greatly inspired by the teaching of the faculty, especially Frs. John Meyendorff and Alexander Schmemann. In 1968, he was assigned to pastor a Lutheran parish in Bay Shore, NY, but continued to strengthen his connections to and knowledge of the Orthodox Church. Having become convinced that Orthodoxy was the true Church of Christ, William Summer was chrismated by Fr. John Meyendorff at St. Vladimir’s Seminary Chapel on October 17, 1971. He was given the name Basil at chrismation. On February 19, 1972, Basil Summer was ordained to the diaconate at the seminary chapel by Bishop Dmitri (Royster) of Washington, DC. His ordination to the priesthood followed on June 18, 1972 by Metropolitan Ireney (Bekish) at Christ the Savior Church in Paramus, NJ. On September 3, 1972, Fr. Basil was assigned as Rector of St. Mark Church in Bethesda, MD, a newly established all English language parish just outside of Washington, DC. Under Fr. Basil’s leadership, the parish grew quickly and acquired land with a church building which was dedicated in 1977 and consecrated in 1982. A dynamic speaker and inspiring preacher, Fr. Basil was also a father confessor to many. Several young men from the parish were moved to enroll in seminary and be ordained to the priesthood. Two other parishes—St. Catherine’s in Hagerstown, MD and Saint Mathew’s in Columbia, MD—were established under Fr. Basil’s leadership as offshoots from the Bethesda parish.

At the end of 1989, Father Basil left the parish in Bethesda, as he was called to serve the Orthodox Church in America as Director of the Fellowship of Orthodox Stewards (FOS). He moved to New York and assumed his new position at the OCA Chancery effective January 1, 1990. His work entailed much travel to visit parishes throughout the United States to preach and conduct retreats, and to instill among the faithful a consciousness of the larger Church outside their own congregations and the stewardship necessary to sustain the work of the departments of the OCA funded through donations to FOS. Father Basil undertook his labors energetically and his own enthusiasm radiated to the faithful, making his efforts successful. After nearly five years of intense labors as FOS Director, Fr. Basil retired. He continued to live near the OCA Chancery and would regularly serve at St. Sergius Chapel there. He was often called upon to substitute for clergy in various parishes and was also invited to churches to serve and preach. He continued to maintain contact with his spiritual children and many friends throughout the country.

Father Basil was a larger-than-life personality not easily forgotten. He loved to socialize and had a keen sense of humor and a distinctive laugh. He made those around him comfortable and a certain charm drew people to him. Among his hobbies and interests were music, reading, bike riding (he would regularly ride several miles until slowed by age and illness just a few years ago), travel, oil painting, theatre, golf, and movies. No matter what he did or where or with whom he spoke, his life was always centered on Christ and His Church. Through his outsized demeanor, he led people to Christ and earned the love and respect of many.

For his labors, Fr. Basil was granted numerous honors and awards, the latest being the mitre that was bestowed upon him by His Beatitude Metropolitan Tikhon in 2018. Just hours before his repose, on the great feast of the Annunciation of the Mother of God, Fr. Basil was blessed with the opportunity to receive the Holy Eucharist brought to his bed in a hospice facility by Metropolitan Tikhon.

The schedule of services for Fr. Basil’s funeral are as follows:

Please note that due to COVID restrictions, only invited clergy may serve at the services. For all of these services, clergy and faithful should also be sure to maintain all safety protocols and precautionary measures.

Other than serving clergy and singers, all in attendance must wear a mask. Additionally, due to social distancing requirements, please register to attend the services here.

May Fr. Basil’s memory be eternal!