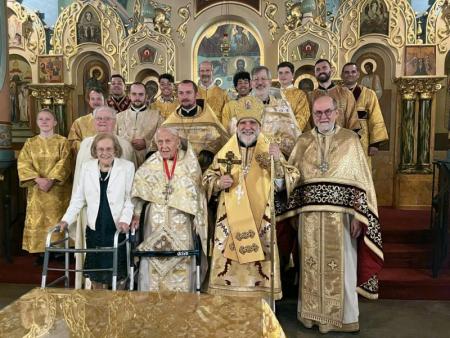 This summer, the oldest living graduate of St Vladimir's Seminary, Trustee Emeritus The Very Rev. Paul Shafran, turned 100 years old and celebrated the seventy-fifth anniversary of his ordination to the holy priesthood. 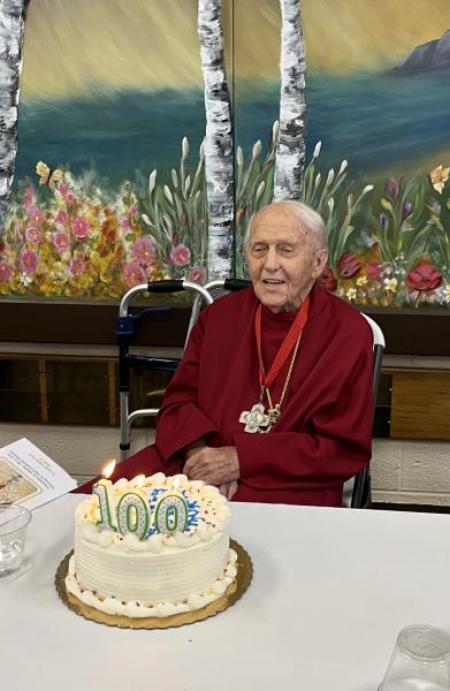 Father Paul was honored at a special ceremony July 2, 2022 at St. Vladimir's Orthodox Church in Trenton, NJ, the parish he served for more than fifty years as pastor. The Very Rev. Dr. Chad Hatfield, president of St. Vladimir's Seminary, took part in the celebration and spoke along with The Right Reverend Michael (Dahulich), archbishop of New York and the New York and New Jersey (OCA), and other clergy and friends.

Archpriest Paul Shafran was born to an Orthodox family in 1922 in Olyphant, PA, and went on to study at Columbia University and St. Vladimir's Seminary. He graduated from the Seminary in 1945 but returned a few years later for post-graduate studies, and he began teaching liturgics as a member of the faculty in the 1950s. Father Paul married his beloved Matushka Mary (née Obletiloff) November 27, 1947. He was ordained to the priesthood December 28, 1947 by the hand of Archbishop Nikon (de Greve of Brooklyn) at the Cathedral of the Holy Virgin Protection in New York City. Father Paul was elevated to archpriest in 1961.

Father Paul briefly served parishes in the Byesville, OH area during his days as a young pastor. He was assigned to St. Vladimir Church in New Jersey in 1949. His long and distinguished pastorship there saw the Church enlarged twice—the first time in 1951 to twice its original size. He was granted retirement in 2002 and subsequently attached to St. Vladimir Church as pastor emeritus.

Father Paul's priestly ministry was multifaceted. In 1955, he was appointed together with Frs. Georges Florovsky and John Telep to a commission for review of a prayer book published by "Svit." The following year he was appointed assistant chairman of the Sunday School Committee of the OCA, where he would work with The Very Rev. John Kivko and Sophie Koulomzine. In October 1960, Fr. Paul was appointed to a commission by the Great Council of Bishops (along with Protopresbyter John Meyendorff as chairman) for the translation of liturgical books from Russian into English. Father Paul's commitment to theological education at St. Vladimir's Seminary saw him not only teach at the Seminary but also serve as trustee starting in 1966, and he accomplished much in his decades on the Seminary Board. He was instrumental, for example in acquiring two important collections for the Seminary library: part of Fr. Florovsky’s private collection and the personal library of Archimandrite Anthony Repella. Father Paul was also dedicated to the care of the elderly as a trustee of Ss. Cosmas and Damian Adult Home on Staten Island. He has also been known as a confidant to many clergy and hierarchs over the years.

May God grant Archpriest Paul and Matushka Mary many years!