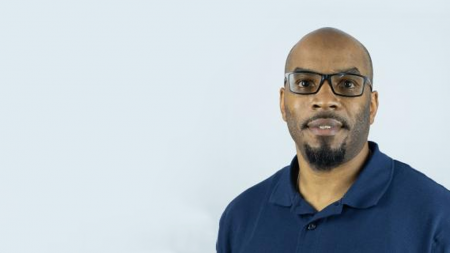 Saint Vladimir’s Seminary Alumnus Antwian (Anthony) Davis has returned to St. Vladimir’s to join the staff. Davis was hired in January 2021 as manager of the SVS Press Bookstore.

"It feels good to be back at St. Vladimir's and being around the daily lifecycle of the Church,” said Davis. “In my time away I missed the daily services and being around people whose aim is to spread the Gospel of Jesus Christ. Working as the bookstore manager gives me a unique opportunity to use ministry in a different way and to continue to spread the Good News through shipping books all over the world.”

Davis graduated from St Vladimir’s Master of Divinity (M.Div.) program in 2019 with a commendation for service to the community. Davis served diligently as the student sacristan and helped establish the St. Moses the Black Society on campus; In 2017 he also participated in an IOCC Action Team with two other seminarians and helped rebuild homes in New Orleans, an area devastated by Hurricane Katrina in 2005.

Davis’s home parish is St Barbara Orthodox Church, Fort Worth, TX, but he originally hails from St Louis, MO. Before joining St Vladimir’s as a seminarian in 2016, he was a sixth grade reading teacher for five years. Before that he spent time coaching football in both high school and college levels and interned with the then-St. Louis Rams of the NFL.

In 2016, Davis shared what drew him to the Orthodox Church and later St. Vladimir’s:

As long as I can remember, I have always felt a draw from God calling me closer to Him. As a Protestant in the Baptist Church I thought the calling was for me to be a minister, and so I became one. I was later ordained in the Baptist Church but still felt like there was more. I did not feel like I had the fullness of the faith. Fortunately the Baptist pastor I was under gave me a few Orthodox books to read, and that is what led me on my path to Orthodoxy. Once I found the Church, it just felt like home, but there was still that thirst for more. The more books I read, the more I wanted more. Nothing seemed to fill my thirst, and after many discussions with my priest he suggested that a few years at seminary might be good for me, just to learn as much as I can during this time.

Before accepting his new position with the Bookstore, Davis had been working as a hospital chaplain in Texas.