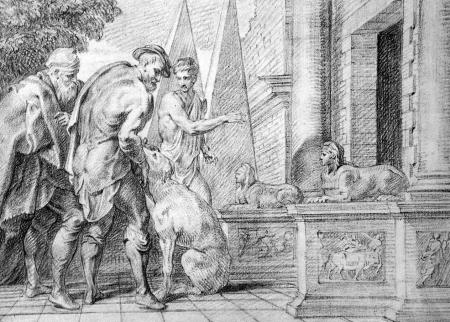 Argus the Watcher, by St. Vladimir's Seminarian Theodore Mantzikos, was chosen as the winning entry of the 4th Annual St. Matthias Merit Scholarship Essay Contest. The anonymous donors behind the St. Matthias Merit Scholarship asked seminarians to reflect on the relationship between Ulysses and his dog, Argus, in Homer's Odyssey, and to relate it to the Syrophoenician woman in Mark 7.24-30 and Christ's exhortation to "watch" in Mark 13.33-37.

Argus is the paradigmatic listener demonstrating how to “watch” to gospel listeners. Agnes Clerke in her book, Familiar Studies in Homer, says that, “...millenniums of experience have constituted the dog a type of incorruptible fidelity, patient abnegation, devoted attachment reaching unto and beyond the grave.”[1] Argus exactly fits this stereotypical definition of dogs in that he watches for his supposed long-dead master with great hope of his return.[2] Clerke also notes that ancient perception of dogs varies depending on the specific dog and source, so this paper will assume dogs’ faithfulness as standard understanding of canines in antiquity for purposes of concision.

One can better understand the Syrophoenician woman’s encounter with Christ with this idea in mind. This interaction is bizarre. The woman begs Christ to heal her daughter, but he responds to her, “Let the children first be fed, for it is not right to take the children’s bread and throw it to the dogs” (Mk 7.27). It appears that Christ is shrugging the woman off with notable disdain at first glance. But, if one takes Argus as the paradigmatic virtuous dog, one can read Christ’s words as a testimony to her diligent faith. Christ implies that the woman is a dog and not dignified enough to eat off the same table as him, but the woman, the "dog", remains at the table knowing Christ will answer her prayer. Christ first refuses to heal her daughter until the woman responds, “Yes, Lord; yet even the dogs under the table eat the children’s crumbs” (Mk 7.28). Saint Ephraim the Syrian in his “Commentary on Tatian’s Diatessaron” says about the woman, “She was not ashamed, to her own benefit, of the name of dogs. Therefore, [he said], ‘Great is your faith, O woman.’”[3] This quote, though severely out of context, is useful in understanding the woman’s parallel with Argus as completely dependent on her master, Christ, upon whom her daughter’s health and her whole life depend. The woman’s faith is striking; she does not even check or question Christ’s ability to heal but finds her daughter at home knowing the miracle has taken place. Thus, the ancient understanding of dogs as seen in the example of Argus shifts a gospel listener’s perception of the interaction between the Syrophoenician woman and Christ from tension to that of honor and exemplary servitude.

The woman taking the posture of Argus' behavior carries out the kind of attention Christ requires in Mark 13.35-36, “Watch therefore—for you do not know when the master of the house will come...lest he come suddenly and find you asleep.” It is unlikely that Ulysses will return on a particular day, but Argus watches nonetheless much like how Christ instructs his listeners. The prophets also possess Argus-like attention. Samuel waits on the Lord’s calling and so recognizes his voice, “Then the Lord called, ‘Samuel! Samuel!’ and he said, ‘Here I am!’” (1 Sam 3.4). Isaiah, too, watches for the Lord until he is called upon in Isaiah 6.8, “And I heard the voice of the Lord saying, ‘Whom shall I send, and who will go for us?’ Then I said, ‘Here am I! Send me.’”

A Christian should be vigilant to hear the Lord’s voice as the prophets did. Their attention is mirrored by the Syrophoenician and Argus waiting for his master to call him. Christ appears abrasive and rude with the Syrophoenician woman at first glance, but his implicit relation of the woman with dogs really points to her excellent servitude and faithfulness. The example of Argus, then, is that of a vigilant servant who cares for nothing except his master’s presence. Christians can look to Argus for his model behavior as an inspiration of the watchfulness Christ urges one to have in Mark 13. Argus shows a Christian how to watch for his master to serve him in the same way that the Syrophoenician woman comes to Christ, trusting, loyal regardless of what happens.

Christ’s words, then, in Mark 13 are an instruction to possess the same kind of faith and vigilance that the woman has in Mark 7, which is exemplified in the paradigmatic expression of such loyalty in dogs like Argus.