Artistic Innovation in the Middle Ages and Today: Encountering Christ in Cologne Cathedral 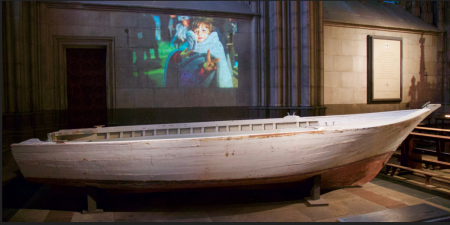 This essay, by Dn. Evan J. Freeman, seminary alumnus (M.Div. ’09, Th.M. ’12), reminds us of the recent Gospel admonition heard on the “Sunday of the Last Judgment”: “I was a stranger and you took me in.” (Matt 25:35). Deacon Evan, who is a Ph.D. candidate at Yale University and also the lecturer in Liturgical Arts at St. Vladimir’s Seminary, explains how the sacred arts—at times through powerful imagery—can proclaim God’s Word in every age.

31 “When the Son of Man comes in his glory, and all the angels with him, he will sit on his glorious throne. 32 All the nations will be gathered before him, and he will separate the people one from another as a shepherd separates the sheep from the goats. 33 He will put the sheep on his right and the goats on his left.

34 “Then the King will say to those on his right, ‘Come, you who are blessed by my Father; take your inheritance, the kingdom prepared for you since the creation of the world. 35 For I was hungry and you gave me something to eat, I was thirsty and you gave me something to drink, I was a stranger and you invited me in, 36 I needed clothes and you clothed me, I was sick and you looked after me, I was in prison and you came to visit me.’

40 “The King will reply, ‘Truly I tell you, whatever you did for one of the least of these brothers and sisters of mine, you did for me.’ (Gospel of Matthew, chapter 25)

I recently visited Cologne Cathedral, a towering Gothic edifice and UNESCO World Heritage Site overlooking the Rhine in western Germany. Begun in 1248 but not completed until 1880, it was the tallest building in the world from 1880-1884 and remains one of the world’s largest churches to this day. Pilgrims and tourists flock to the cathedral daily, both to pray but also to admire its impressive architecture and numerous other masterpieces of sacred art contained within. On my recent visit, two artworks in particular struck me—one medieval and the other postmodern—that each highlight the vital role of artistic creativity in Christianity’s perennial quest to understand and proclaim God’s eternal Word in every age

The renowned Gero Cross was at the top of my list of things to see in Cologne Cathedral (recently discussed by Annika Elisabeth Fisher in “Cross Altar and Crucifix in Ottonian Cologne—Past Narrative, Present Ritual, Future Resurrection”). Probably commissioned by Archbishop Gero around 970 to stand above an altar dedicated to the Crucifixion, the Gero Cross is now set in a Baroque frame and situated north of the high altar. Carved in oak then painted and gilded, the life-size sculpture renders the dead Christ with striking naturalism. Christ’s distended stomach projects outward toward the viewer, while His taught arm muscles strain to support the weight of His lifeless body. Eyes closed, His head slumps in death.

To the modern tourist walking through Cologne Cathedral, the Gero Cross might seem like just another medieval crucifix, a traditional Christian image from a time long past. But it would be wrong to dismiss the Gero Cross as a conservative work, since it was remarkably innovative in its own time. Before the Ottonian period (919-1024), sculpture in the round had been virtually absent from Christian art, still carrying connotations of pagan idolatry. The Gero Cross marks a period of revival of freestanding statuary in the Christian artistic tradition.

Depicting a dead Christ was also a relatively recent innovation. Images of the dead Christ on the cross emerged in Byzantium in the post-Iconoclastic period as a means of emphasizing Christ’s human nature. They also appeared in the west in the ninth century in conjunction with theological writings like Paschasius Radbertus’s ninth-century De Corpore et Sanguine Domini that emphasized the real presence of Christ’s body in the Eucharist. What’s more, an eleventh-century text called the Chronicon of Thietmar of Merseburg (written between 1012 and 1018, just a few decades before the Eucharistic debates erupted between Berengar of Tours and Lanfranc in the mid-eleventh century) suggests that the Gero Cross once contained a relic of the True Cross and some of the consecrated bread of the Eucharist. This inclusion of relic and Eucharist made the Gero Cross more than a mere depiction of Christ, and instead transformed it into a kind of reliquary and proto-monstrance (anticipating the appearance of monstrances in the fourteenth century that displayed the Eucharistic bread for veneration).

We can only imagine how surprising and compelling the Gero Cross, with its triple presentation of Christ in image, relic, and Eucharist, must have been to its original medieval audience. Today, crowds of tourists dutifully stop beneath it to consult their guidebooks (or smartphones) for a moment or two before moving on to the next attraction.

But on my recent visit to Cologne, a much newer artwork also attracted crowds of visitors, and it caught my attention too. Installed in 2016 and located just north of the church’s west entrance, the title of the installation is projected on the floor in multiple languages beginning with German: Christus sitzt im Flüchtlingsboot, “Christ sits in the refugee boat.” Drawing close to the installation, the viewer encounters a small, wooden boat resting on the stone floor of the Gothic church like a Duchamp readymade. The boat is entirely unremarkable, except for its curious presence within the Gothic cathedral.

A caption beside the boat reads:

This fishing boat was confiscated by the Maltese Army in the Mediterranean Ocean. Smugglers were using it on the route from Libya to Italy. The boat is seven meters long and carried up to 100 people. The refugees had no protection from sun, storm or cold. They were not allowed to bring anything, not even food or water. So many people were packed on the boat on the trip over that some suffocated and many survivors collapsed from being unable to breathe.

Combining a found object with projected words and images, the multimedia Flüchtlingsboot is unapologetically postmodern in format. Its power lies precisely in its poignant combination of otherwise disparate elements. The work’s caption transforms a seemingly ordinary fishing boat into a tangible illustration of the migrant’s suffering. Even more than an illustration, the boat is an actual artifact of human suffering, a kind of contact relic akin to the piece of the True Cross inside the Gero Cross. But whereas Gero’s life-size scale and illusionistic carving thrusts an emphatically kataphatic image of the suffering Christ into the physical space of the viewer, Flüchtlingsboot answers with an apophatic vision of Christ, an absence that urges the viewer to look beyond the artwork and into the faces of his or her fellow human beings represented by the projected photographs of refugees. On my recent visit to Cologne, Flüchtlingsboot’s effectiveness was manifest in the constant stream of pilgrims and tourists who gathered around the boat to contemplate the refugee’s plight, offer prayers, and place alms in the nearby collection box for Migrant Offshore Aid Station (MOAS).

Although they both claim to represent Christ, the Gero Cross and Christus sitzt im Flüchtlingsboot are two very different works, serving distinct liturgical functions and aimed at unique historical audiences. The Gero Cross employs medieval materials and techniques to create an illusionistic cult image originally intended for a cross altar in Cologne’s Ottonian cathedral. It combines image, relic, and Eucharist to offer the viewer an embodied encounter with the crucified Christ that evokes medieval descriptions of Christ’s physical presence in the Eucharist.

In contrast, Flüchtlingsboot is a postmodern, multimedia installation that greets tourists and pilgrims alike at the entrance of the cathedral and challenges them to recognize Christ in the suffering refugee before they seek Him in iconic works like the Gero Cross or in the Eucharistic bread. Recalling Last Judgment scenes that decorate the entrance portals of Romanesque churches like St. Foy at Conques in France, Flüchtlingsboot confronts those entering Cologne Cathedral with Christ’s stark description of the Last Judgment in Matthew’s Gospel, paraphrased and contextualized by Cardinal Rainer Maria Woelki, archbishop of Cologne: “Whoever lets people drown in the Mediterranean lets God drown.”

But despite their differences, the Gero Cross and Flüchtlingsboot are both exemplars of the same dynamic Christian artistic tradition that has embraced creativity in every era as a means of communicating the timeless message of the Gospel to contemporary audiences. As the Greek Orthodox iconographer George Kordis recently told me in an interview for the Sacred Arts Initiative, “Tradition is creativity. If there is a tradition with no creativity it is no tradition anymore, it is something dead… Creativity is a basic characteristic of tradition.” In the tenth century, the Gero Cross daringly innovated by employing a novel naturalistic style and three-dimensional format to promote a new theological insight about Eucharistic realism. Through its postmodern combination of found object and projected words and images, Flüchtlingsboot compellingly reveals the crucified Christ in suffering refugees to its twenty-first century audience.

And as we witness the dark tides of nationalism and xenophobia rising across Europe and North America today, Flüchtlingsboot’s powerful call for hospitality—the Biblical mandate to the love the stranger—couldn’t be more timely or more potent.