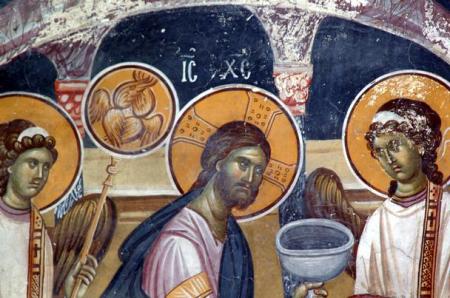 A homily for the Fourth Sunday of Pascha, 2015.

There has been a lot of fighting this week. Last night there was a big boxing match with two superstars duking it out. The winner of that fight went home many millions of dollars richer, with the adulation of an international crowd ringing in his ears. Earlier in the week we saw a much larger and poorer fight in the city of Baltimore. A fight that pitted citizen against citizen, against policeman, against shopkeeper, against everything. There were heroes too; people who bravely stood for peace or in defense of the weak. But unlike Vegas on Saturday night, in this fight there were no trophies, no accolades, and no winners.

It is true that Baltimore’s police department had a history of abusing the authority it was given. It is true that poverty and difficult circumstances do not excuse wanton destruction and theft. It is true that racism and abuse of power are still sadly common in this country, and it is true that heroic public service is too. If all these things are true; if neither fault nor solution can be ascribed solely to the public, the President, or the police, where does this leave us as we look for a way forward? How can justice and peace be realized? As you might expect, the Gospel reading gives us light for this dark problem.

Today we hear about a man who had been sitting by a sheep washing pool in Jerusalem for 38 years in the hope of being healed of his paralysis. Once a year the Archangel Michael would disturb the sheepy water and the first person into the pool at that point would be restored to full health. Alas for our poor paralytic. In all the years he sat waiting, never once did he get to the water in time because, unlike many of those who had been healed in the past, he did not have a friend to help him. Jesus sees the man laying there and asks him, “Do you want to be made well?” “Of course!” He gasps excitedly. Actually, no, he doesn’t say that at all. He simply tells Jesus that he can’t get to the water fast enough. He’s fixated on the pool, his old way of thinking about the solution to his problem, and doesn’t know that salvation isn’t in the pool any longer, but in the man standing before him.

In an article written a year ago for this very day, Fr. Lawrence Farley gives the following insight into today’s Gospel:

In John’s subtext, the pool functions as an image of the Law and the man as an image of Israel hoping to find salvation in the Law. The paralytic had been long in his condition, even as Israel had long been waiting for divine salvation. The Bethesda pool was thought to have been stirred by an angel, even as the Law had been given by angels (Acts 7:53). The pool even had five porticoes (John 5:4), even as the Mosaic Law had five books. Like the paralytic who had to stop relying on the pool for salvation and turn instead to Christ, so Israel had to stop relying upon the Law to save them, and also turn to Christ. The old was giving place to the new.

We see this contrast between the old and the new throughout John’s Gospel: not Jewish water, but Christ’s wine, not the old Temple, but Christ’s body, not the manna in the wilderness, but Christ’s flesh. Christian faith involved turning from the old ways to the new, as sacred Jewish history veered upward into the Kingdom and the eschaton. It was as Isaiah foretold long ago: “Remember not the former things, nor consider the things of old. Behold, I am doing a new thing; now it springs forth, do you now perceive it?” (Isaiah 43:18-19).

How does this Gospel illumine the ongoing social crisis we saw in Baltimore this past week and may face in our own community in the future? It grounds us in Christ again. Like the paralytic we get fixated on our old external answers. We favor conservative, or progressive, or radical political solutions, and the partial truth they contain, to the intractable problems of human society. We forget that the power that allowed Fr. Roman Braga to confess the faith despite horrendous torture and years of isolation; the power that gave Dr. George Washington Carver, a black man, the willingness to discover, as a blessing to the Jim Crow South, more than 300 uses for its peanut crops; the power that can give frustrated Baltimoreans and world-weary policemen love, compassion, and forgiveness for one another – a true basis for society – is not rooted in politics, economics, criminal or social justice. The power to love one’s enemies, to do good to those who persecute you, and so end the demonic cycle of hatred and violence, is in the grace of the Holy Spirit given as a gift to those who put their faith in Christ.

It seems cliche to say it, but, more than anything else, this is what Baltimoreans need. They need Christ. So do the people in our community where these same tensions are not unknown. And we have Christ, here in the Holy Mysteries, and therefore in ourselves! We are grace-bearing creatures, commanded to be salt and light for those around us. If we obey this divine command and begin to offer Christ to our community, lovingly, patiently, and gently, through prayer, acts of kindness, integrity, fidelity, and all the rest that goes with being His witnesses, He can bring healing to our community by doing in others the work He is doing in us. As Isaiah says, He will lift the low, make the rough smooth, and straighten the crooked. (Is. 40:4)

With His Father, and the All-Holy, Good, and Life-Creating Spirit, now and ever, and unto ages of ages. Amen.

Fr. John Cox is a 2011 graduate of St. Vladimir’s Seminary. Following graduation Fr. John and his family were assigned to Dormition of the Theotokos Orthodox Church (OCA, Diocese of the South) in Norfolk, Virginia.