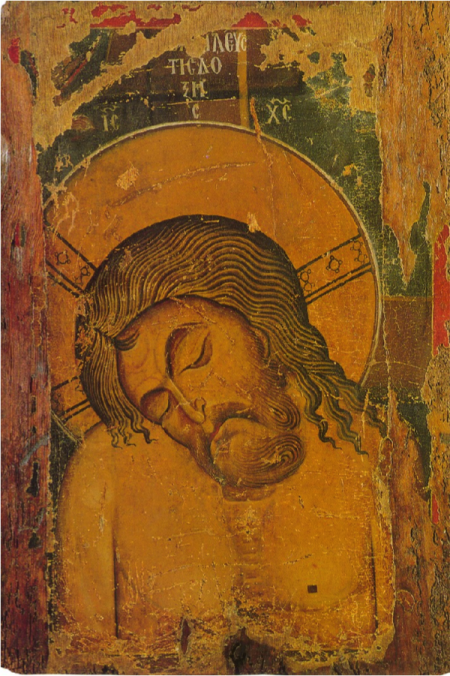 Pascha approaches: we should reflect once again on this crux of our faith, orient ourselves anew by the perspective that it offers, and enter afresh into its mystery.

By his death, his voluntary self-offering in love for us, Christ has destroyed death and granted us life. We say such words so often, that we frequently become immune to the stumbling-block and scandal that they present, and so overlook their implications for us. By dying, as a human being, Christ has shown us what it is to be truly divine: Lordship manifest in service, strength in weakness, wisdom in folly. If he had shown us what it is to be divine in any other way (acting, for instance, as a superhuman god), we could have had no share in him and his work. The fact is that we are all going to die, whether we like it or not. The only question is how we are going to die? Clinging to all that we think is ours, our own life and possessions, our own status or merit? Or following him on his path to Golgotha, laying down our life in love for him and our neighbors? Living, yet still dying, or dying to live.

By his action, by his shed blood and broken body, Christ has called us to be his Church. We like to use the language of the Church triumphant, the glorious body with a mission to bring the whole world within its fold and so manifest the Kingdom of God upon this earth. And indeed this is our mission: Go and teach all nations, baptizing them in the name of the Father, and the Son, and the Holy Spirit . But we must never forget that the glory of this body is one that is only seen by those whose sight has been trained to look upon the cross and see the Lord of glory. As St Athanasius put it, the more that the Lord is persecuted and humiliated, the more his glory and divinity is manifest … to those that have eyes to see.

And this continues, he affirms, in those who now constitute his body, those who take up the faith of the cross and willingly submit themselves to death, that he might live in them. Such a one was Blandina, the slave girl, the epitome of weakness in the ancient world, who was hung on a stake to be eaten by wild beasts. Spectators in the stands only saw another seemingly misguided fool dying for their entertainment, but those who struggled alongside her in the arena “saw in the form of their sister the one who was crucified for them.” Dying, Christ lives in her, so that she now lives eternally.

Let us never forget that this is the glory of the body of Christ, the Church, in this world, this is the life we profess to live, this is the inauguration of a kingdom not of this world. As we endeavor to extend this kingdom, we must of course strive to ensure that our behavior does not provide a scandal or stumbling block to others. At a minimum, we must hold ourselves to the highest standards of the society in which we live. But we must equally not fall into the error of supposing so doing is enough for the body of Christ to be in “good order”: as the body of Christ, we will be a laughing stock, held in scorn and derision –  let us never forget this, and let it always be for the right reason!

Troubles such as those that currently beset the Church have done so from the beginning, and they can easily become an occasion for loss of faith, especially if we set our stock solely on the “good order” of this world. Indeed, one of the desert fathers of old warned that in days to come one will scarcely find faith left on this earth, and that the struggle to keep the faith in such times will be greater than any ascetic feat performed of old. If such troubles can be an occasion for despair, they can also be a powerful impetus to make sure that our focus is properly oriented, that our faith is in Christ alone.

We live straining towards the future, the coming Christ, nourished by the hope that he offers. Let us not then be weighed down by the cares of today, for they too will pass; let us instead prepare ourselves for the still greater struggles ahead. But we can only do this if our sights are truly set on the Kingdom inaugurated by the Passion and manifest in those, in us, who by dying live.

Let us Forgive all in the Resurrection

Forgiveness is at the heart of the mystery of the Resurrection: “let us forgive one another so that we may cry aloud, ‘Christ is Risen!’” We cannot claim to be Christians, to dare to greet one another with this  paschal greeting, unless we do so with a forgiving heart. But the depths of this forgiveness is not plumbed if we think that this means the repentance of others and our forgiveness of them, resulting in a peace, or rather a truce, that suffices us. Christ came to call the sinners, so that if we would be amongst the called, this is how we must regard ourselves, the chief, indeed, amongst the sinners.

We must be like the apostles: as Saul, confronted by Christ asking “Why are you persecuting me?” so becoming the great apostle Paul; as Peter, who before resuming his calling as a disciple, had to confess his love for Christ three times, standing by the burning coals, as he had denied Christ three times, warming himself by the burning coals, which harkens back to the vision of Isaiah who, seeing the Lord sitting upon the throne hymned by the seraphim, lamented “Woe is me, for I am lost; I am a man of unclean lips,” and so received the burning coal taken from the altar, hearing the words “Behold, this has touched your lips; your guilt is taken away and your sin forgiven.”

Approaching Christ in this way, as ourselves repentant and seeking forgiveness, our hearts will be broken so that the love and forgiveness of Christ can flow through us to others. Then we will be able to receive, from the same altar and with the same words of forgiveness, the medicine of immortality, so that dying we also may live.

Unless a Seed Falls in the Ground and Dies

We are called to take up the Cross, to die with Christ, to become the one body of Christ. Our divisions are truly a scandal of our own making. Whether they are between persons, within an ecclesial body, or between ecclesial bodies, each and every one of us is responsible for our failure to make Christ present through our witness, our martyria, to a world that is increasingly alienated from God and increasingly thirsting for Christ. Clinging on to that which we value, whether our own dignity confronting that of others, a strife-creating indignation within our ecclesial bodies, or our pride in the distinctiveness of our own ecclesial body and the hierarchies of a long-gone era, we are like the seed that remains alone, rather than dying to bear fruit. If we are to be Christ’s one true Body, we must follow him by dying to everything that separates us from him, all that belongs to this world rather than to the Kingdom, and hold ourselves open to wherever he may lead us. Dying, then, we might begin make Christ manifest by how we live as his one body.

We are on the threshold of the Pascha of the Lord. This is not simply an annual event, that we might forget once we stop singing that “Christ is Risen!” It is rather the eternal mystery, present at every moment – every moment, that is, that we do indeed take to heart its proclamation and by dying, live.