Can You Hear the Wolves? 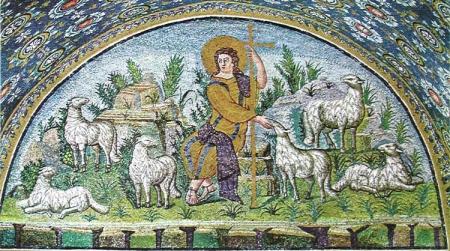 A homily delivered in the Three Hierarchs Chapel at St. Vladimir’s Orthodox Theological Seminary on the Feast of St. John Chrysostom (Tuesday, November 13, 2012).

At night, the shepherds would have heard the wolves. The shepherds in the time of Jesus took their flocks out into the countryside to find pasture and water. Journeying far from the safety of the village or the city, settling down for the night, they could hear the hungry wolves that prowled in the distance. Remember, this was not the Wild West; shepherds did not carry lever action Winchester rifles to fend off predators. The shepherds in Jesus’ day would have had a wooden staff, a sling, and a bag of small round stones. Shepherds had to be brave folks who could face danger. But at night, as the small fire would have been dying down to embers, and as the sheep settled down, they would have heard the wolves, and it would have sent a chill up the spine of the bravest shepherd.

Can you hear the wolves?

When Hurricane Sandy knocked us off the grid and devastated the Tri-State Area, could you hear the wolves?

As the national election shook the country and inflamed passions of anger and bitterness between brothers and sisters, could you hear the wolves?

Hearing about scandals and controversy within the Church on the national level, in the parish, or between friends and family, can you hear the wolves?

It is awfully tempting to run for it, isn’t it? Just give up the whole thing and run for your life. Today Jesus tells us that if the shepherd was a hired hand, if the sheep weren’t his own and if he caught a glimpse of those ravenous wolves advancing towards the sheep, he’d abandon the flock and run for his life. And the sheep scatter, and the wolves attack at will. Now, if we are merely talking about livestock, then a shepherd might fare pretty well if he ran for his life. There are only so many wolves, maybe a dozen or so, and odds are that a pack of wolves would much rather go after a young lamb, a slow pregnant female, or an old feeble sheep.

But here is the problem.

Jesus is not giving advice on caring for livestock; he is speaking of a spiritual reality.

And the wolves that Jesus is talking about are not of this world. They are demons, intent on dividing the Body of Christ and devouring human souls. So, if the shepherd runs away and leaves the flock of Christ to the demonic wolves, there is no safety for anyone. The demonic powers of Satan will not only hunt down every last one of the sheep but also go after every shepherd that runs and tries to save his own life.

But our shepherd is not a hired hand.

Our Lord and Savior Jesus Christ lays down His life for His reason-endowed flock. He offers His life as He is suspended on the Cross so that we would know, without a doubt, that He loves us and that we belong to Him. Jesus Christ is the Good Shepherd. He knows His own flock, and His flock knows Him. We hear His voice and we follow Him.

Today we celebrate the life of St. John Chrysostom, a man who listened to the voice of the Good Shepherd, a man who followed in the footsteps of Christ, a man who did the work of the Gospel. He served the flock of Christ in the midst of a wilderness of sin: Constantinople, with its spectacles and games, its greed and its wealth, its lust and its passion. The demonic wolves in that capital city threatened the flock of Christ more than any predators in the Jordan Valley ever threatened a flock of sheep. In the midst of that danger, St. John stood by the poor, the weak, and the vulnerable, constantly providing for spiritual and material needs. Ravening wolves attacked him from every side. On one side, strict disciplinarians said that he was too soft in his merciful appeal to sinners. He would say, “If you have fallen a second time, or even a thousand times into sin, come and you shall be healed.” On the other side, influential and wealthy bishops and priests mocked him for his austere lifestyle and publicly accused him of mismanagement, claiming that his care of the poor was a “waste” of Church money. Finally, he was attacked head-on by a vain and decadent empress and her imperial court, who did not feel it was right for a bishop to criticize their public spectacles.

Yet in spite of it all St. John stood by his flock and never ran for his life. Facing the imperial threat he said, “Though the sea roar and the wave rise high, they cannot overwhelm the ship of Jesus Christ. I fear not death which is my gain, nor exile for the whole earth is the Lord’s, nor the loss of goods for I came naked into the world and I can carry nothing out of it.”He stood by his flock until armed guards dragged him out of the city into exile. But even in exile, he wrote letters and exhorted his friends and spiritual children, reminding them of the love of God and the mercy of Christ. And in his death, out in the lonely, harsh place where he had been literally dragged in chains, he completed his course by laying down his life, in emulation of Christ the Good Shepherd. And with his last breath, saying, “Glory be to God for all things.”

Hearing the Word of God, preaching the Gospel and standing by the weak and the vulnerable, even when it costs you your life: this is the legacy of St. John Chrysostom.

Today we follow Christ the Good Shepherd. When a stranger is hungry, we feed him. When a sister is lonely, we sit by her side. When a brother is angry, we patiently listen to him, just like God always patiently listens to us. We follow Christ the Good Shepherd; we hear His word and know that we belong to Him. And we lay down our life for others, just like He laid down His life for us.

The Rev. Dr. J. Sergius Halvorsen (SVOTS ’96) received his M.Div. from St. Vladimir’s Seminary and completed his doctoral dissertation at Drew University in 2002. From 2000 to 2011 he taught at Holy Apostles College and Seminary in Cromwell Connecticut, where he also served as Director of Distance Learning. He was ordained to the priesthood in February 2004, and currently serves on the faculty of SVOTS as Associate Professor of Homiletics and Rhetoric and Director of Field Education.