Consumed By the Fire of the Spirit 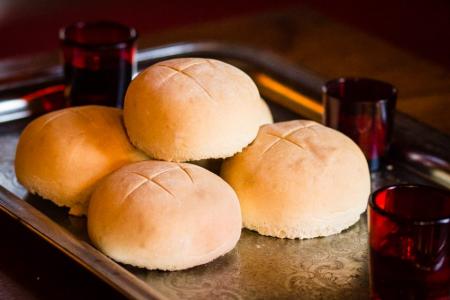 A homily for Pentecost.

Today, on this fiftieth day after Pascha, the feast of Pentecost, we stand at a decisive turning point: we counted all the weeks that lead us through Great Lent to Pascha, and then the weeks after Pascha. But from now own, until we begin again next year the journey to Jerusalem and the Passion, every week is counted from this Sunday – the Sundays of Pentecost.

This is the very setting for the reading that we heard in today’s Gospel: how Jesus was in Jerusalem on the last day of the feast, the great day, and standing up, he said:

“If any one thirst, let him come to me and drink. He who believes in me, as the scriptures said, ‘Out of his heart shall flow rivers of living waters.”

Those who had been sent to arrest him returned to the chief priests and Pharisees empty-handed, they were perplexed- “no man has ever spoke like this man” they reported. The Pharisees, who thought of themselves as the keepers of the Law, were indignant: to them it seemed that Christ had repeatedly broken and flouted the Law; so, while the crowd was starting to believe in Christ, the Pharisees dismissed this: the crowd, they argued, clearly don’t know the Law, and so they are accursed.

However, the tables have turned: Christ came not to put an end to the law, but to complete it.

And it is this completion that we celebrate today on our feast of Pentecost: not the law written on stone tablets, but the Law of God inscribed by the Holy Spirit on the fleshly hearts of human beings.

As the Law given through Moses prepared the people of Israel to become a pure and holy nation, to enter the Promised Land, so the Law of the Spirit given in Christ prepares us, as the Israel of God, to purify ourselves from the corruption of this world, entering instead into the Kingdom of God.

As Moses ascended Sinai, amidst the thunder and lightning, when the Lord came down upon it in fire, and then descended with his face shining so brightly that he covered his face with a veil, so Christ, having ascended into the heavens through his Passion, now sends down upon his disciples another paraclete – another intercessor or comforter – who descended upon the apostles in the form of fiery tongues, so that clothed with power from above, they might become witnesses to Christ to all the ends of the earth, calling all human beings to faith in Christ and salvation.

This is the gift of the Spirit that we heard about last night: in the reading from the book of Numbers – where the Lord took some of the spirit that was on Moses and put it upon the seventy elders, so that they prophesied.

And in the prophecy of Joel, who foretold how the Lord would pour out his spirit upon all flesh, the prophecy that Peter quotes on the day of Pentecost itself.

It is through this gift of the Spirit that we too become witnesses to everything that Christ has accomplished for our sake: and so time, from this day onwards, is measured as the days of Pentecost. Next Sunday we will begin our celebration of this time by commemorating all the saints – all those, that is, who in the Spirit have become images of Christ.

The gift of the Spirit, as we heard in the reading from Acts and see in the icon before us, took the form of tongues of fire resting upon each of the apostles: tongues – because they were called upon to preach the Word of God, and fire – because God is a consuming fire.

Let us take heed about this: what we are called to is not simply preaching in the sense of communicating some information, telling others about something that happened long ago;

No, we are to become witnesses – that is, monuments, examples, martyrs – of what Christ has effected, we are to be consumed by the fire of the Spirit, so that we are incorporated into the life of God, to become the body of Christ (as we see on the icon – Jesus is not present) so that each and every one of us becomes a partaker in Christ’s victory and his Kingdom, so that we also have the Spirit of God in our hearts, calling upon the heavenly God as Father, Abba.

As we come to realize where our true home lies – that we are not children of this world, but that our true home, our true happiness and our very life itself is found only with God in his Kingdom, as we come to realize this, we will also certainly, even if paradoxically, become ever more dissatisfied with ourselves, our bondage to sin, to our passions, to our desires, to all the innumerable ways in which my ego binds me to this world to the vicious cycles that lead to death and destruction.

If we don’t perceive this dissatisfaction, we will never be prompted to leave such things behind, to ascend with Christ from earth to heaven, where he has gone to prepare a place for us. And, of course, the only means for this ascent is to follow Christ by ourselves taking up the cross, something which we are now able to do by the power of the Spirit granted to us.

As we take these steps, we will also assuredly begin to experience that which was spoken about in the third reading from last night: the words of Ezekiel about how the Lord will take out our hearts of stone and replace them with hearts of flesh – merciful, loving and compassionate.

It is this that God desires – a broken spirit and a contrite heart. It is this that is indeed the fulfillment of the law; and it is this bloodless sacrifice that we now offer him, as we lift up our hearts to the Lord.

For more homilies by Fr. John Behr, check out The Cross Stands While the World Turns: Homilies for the Cycles of the Year.