A day to bring the love of Christ into the world 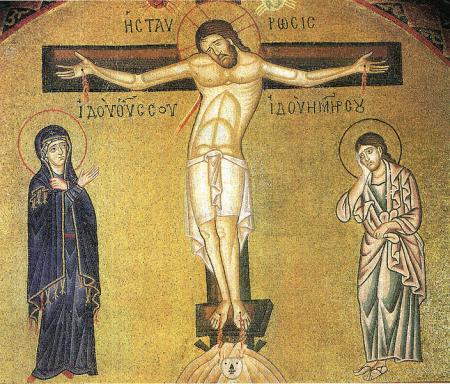 A homily delivered in the Three Hierarchs Chapel at St. Vladimir’s Orthodox Theological Seminary on the Feast of St. Demetrios (Monday, October 26, 2015).

Some excuses never get old.

When I was little, if my brother did something to me, I’d do the same back to him. I’d launch a proportionate retaliatory strike. If he pulled my hair, I’d pull his hair. If he punched me in the arm, I’d punch him in the arm. And whenever I got caught, what do you think I said?

Somehow, without ever having been taught, my kids know the exact same excuse.

“Why did you do that to your brother?”

This excuse is as old as time, yet every generation picks it up and uses it. And it’s not just kids that use the excuse. Husbands and wives use it to excuse insults and infidelities. Neighbors use this excuse to justify snubs and petty treachery. Nations and regions are torn apart by brutal retaliation and blood feuds. And in every case, it is all based on that age old excuse:

“Someone hurt me, so I have the RIGHT to hurt them back.”

An eye for an eye, a tooth for a tooth. A proportionate, retaliatory strike.

But does it bring life?

There is a famous line from a play, where villagers are being unjustly driven from their homes, and they say, “We should stand our ground, we should fight. An eye for an eye, a tooth for a tooth!” And the main character replies, “Very good. That way the whole world will be blind and toothless.” And it’s true.

Blinded by a quest for justice on our terms we cannot see our neighbor as a human person, created in the image and likeness of God. All we see are dark fearful shadows. And having been rendered toothless, we starve, unable to eat at the table of God’s mercy. Instead we choke on the smoke of our smoldering anger. We dwell on old wounds and grievances as if they could do anything more than poison our souls.

Today Jesus says to us, “If the world hates you, you know that it hated Me before it hated you.” So, according to the age-old excuse, Jesus had every right to hate the world. Of all the people who have ever lived, Jesus had the most reasons to hate the world back. He was innocent. He had done nothing wrong. He had committed no crime. He healed the sick, he gave sight back to the blind, he cast out demons, he fed the multitudes. But yet, he was convicted by the religious authorities of being a blasphemer, and he was convicted by the governor of being a political trouble-maker. So they stripped him naked, and whipped him, and marched him through the city, and nailed him to a cross, and let him hang there until he died.

If anyone had the right to hate the world it was Jesus.

But he knew better.

Yes, the world hated Jesus, but God so loved the world that he gave his only begotten son. God acted first, out of love and mercy and compassion. He came into the world and facing the horrors of the Crucifixion, as the world went mad with hatred, Jesus prayed, “Father forgive them for they know not what they do.”

Instead of making excuses, Jesus makes the perfect sacrifice. He offers himself. And today we see that same sacrificial love in the life and death of St. Demetrios.

St. Demetrios was born and raised in a Christian family in the late third century, before Christianity was legal. His father was a high-ranking imperial official in Thessalonica who maintained a secret Church in his home. When Demetrios’ father died, the emperor appointed Demetrios to succeed his father as proconsul.

But in addition to the normal imperial duties of managing and protecting the city, the emperor commanded Demetrios to eradicate Christianity in the city and execute anyone who called on the name of Christ. Demetrios accepted the appointment as proconsul, but instead of carrying out the emperor’s command, he returned to Thessalonica and publicly confessed his Christian faith, proclaiming the Gospel to all that would listen. Upon learning that Demetrios was a Christian and that he had converted many to the faith, the emperor ordered his arrest.

At dawn on October 26, 306, soldiers came to his cell and ran him through with spears. Instead of making an excuse, St. Demetrios made the perfect sacrifice of his own life.

Martyrdom breaks the cycle of violent retribution. The Christian martyr does not go down in ball of flaming rage, but rather makes a simple statement:

I would prefer to die than to renounce my faith in Christ, so that you may know the power of the love of God.

Since his death and burial, the relics of St. Demetrios have been a source of consolation and inspiration to generations of believers. Multiple empires and hundreds of wars have come and gone since the death of St. Demetrios, but his witness to the love of Jesus Christ remains. The martyr does not die in spite of his persecutors, any more than Jesus died in spite of the world. Rather, the martyr dies for the salvation of the very ones who persecute him.

This is the love of Christ.

This is the power of God.

So today is not a day for excuses. It is a day to bring the love of Christ into the world. Smell the air, right here in the chapel. Do you smell the sweet aroma of myrrh? It is not unlike the myrrh that streams from the tomb of St. Demetrius. It is the wonderful aromatic reminder we have on our clothes every time we return home from Church.

So today, the moment you feel the slightest hint of anger or resentment, think of this smell right now, and remember the love of Christ that fills our hearts this morning. In some small way, perhaps known only to God, sacrifice part of your life for the sake of your neighbor. Respond to an insult with a kind word. Repay an offense with an act of kindness. React to anger with the love of Christ. Offer yourself for the sake of your neighbor, and glorify Jesus Christ.

The Rev. Dr. J. Sergius Halvorsen (SVOTS ’96) received his M.Div. from St. Vladimir’s Seminary and completed his doctoral dissertation at Drew University in 2002. From 2000 to 2011 he taught at Holy Apostles College and Seminary in Cromwell Connecticut, where he also served as Director of Distance Learning. He was ordained to the priesthood in February 2004, and currently serves on the faculty of SVOTS as Assistant Professor of Homiletics and Rhetoric and Director of the Doctor of Ministry Program.