Embracing the Sacrifice of the Priesthood 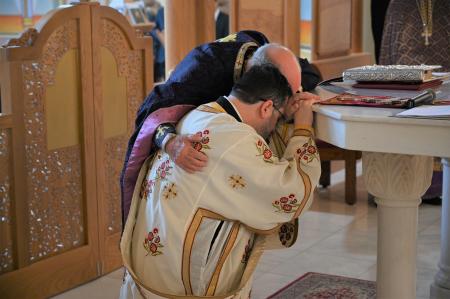 Father Jeremy Davis, an alumnus of St. Vladimir's Seminary ('04) is protosyngellos of the Antiochian Archdiocese and assists Metropolitan JOSEPH at the archdiocese headquarters in Englewood, NJ. He is the author of Welcoming Gifts: Sacrifice in the Bible and Christian Life, due to be released early this summer by Ancient Faith Publishing.

Father Jeremy's reflection, Embracing the Sacrifice of the Priesthood, was originally published in the Antiochian Archdiocese's May/June 2022 edition of  The WORD magazine.

Embracing the Sacrifice of the Priesthood

Sacrifice is at the heart of priestly ministry—this is a truth that most of us take for granted, but what does it mean to you? Does it evoke the prospect of financial hardship and strains on one's family? Does it conjure up images of priests shoveling snow or cleaning bathrooms at a church, when no one else will do it? Does it bring up the fearful possibility of personal attacks and rejection by those one serves?

In America today we have an ambivalent attitude toward the idea of sacrifice, to say the least. We honor the sacrifices of first responders, soldiers, clergy, and others as heroic examples of self-denial for the sake of others. We like to think of ourselves as such self-sacrificing heroes (at least, in our best moments). Yet we often fear the toll of serious sacrifices on our lives and take pains to avoid them. No parent raises a child with the goal of sending him off to sacrifice; on the contrary, most steer their children toward easier paths in order to avoid such an outcome.

This ambivalence toward sacrifice may be leading some young men away from a calling to the priesthood. I have heard on occasion that many Orthodox parents discourage their sons from pursuing a calling to ministry for fear that they will suffer in this vocation. At the same time, among our Archdiocesan clergy, the number of priests raised in American Orthodox homes seems to be disproportionately low compared to those who either converted or immigrated from overseas. Why is it that the vast majority of boys growing up in the churches of our Archdiocese seem to avoid this vocation? It would be hard to trace a definite link, but it seems that this fear of sacrifice may be holding some of our sons back from a life of service in the Church.

This ambivalence has even broader ramifications. Sacrifice is at the heart of the entire Christian life, not just the priesthood. In the New Testament, all Christians are taught to make sacrifices regularly through worship, prayer, obedience to God, giving to the poor, and the like (Rom. 12:1; Heb. 13:15­–16; etc.). I'm afraid most of us simply ignore these parts of the Bible because the idea of sacrifice is so difficult for us to accept into our lives, and we thus shortchange ourselves by neglecting these aspects of the Faith. This reluctance is tragic and so unnecessary, since the suffering-centered, fear-inducing modern idea of sacrifice we take for granted is such a distortion of the offerings God desires from us.

In the Bible, sacrifices are almost always occasions of joy and gratitude—not fear and reluctance—as we hear in these verses from the Psalms: "I went around and sacrificed in His tabernacle a sacrifice of shouting; I will sing and play the harp for the Lord," and, "Let them sacrifice to Him a sacrifice of praise, and let them proclaim His works with great joy" (26:6; 106:22 [27:6; 107:22]). Sacrifices were often accompanied by feasting and celebration, as in Deuteronomy 27:7: "There [in the Promised Land] you will sacrifice a sacrifice of a peace offering to the Lord your God and eat and be filled and rejoice in the presence of the Lord your God" (see also Gen. 31:54 and 3 Kin. 8:61–65). Even when sacrifices were a result of sorrow for sin, they were accompanied by hope of a renewed and restored relationship with God.

We have lost sight of this joy of sacrifice as a result of focusing on its cost. Sacrifices have always carried a cost. In biblical times, when sacrifices were primarily gifts of food to God, people went to great expense to offer a cow or a sheep—a prized commodity at a time when most people couldn't afford to eat meat except on special occasions. They also invested a lot of effort and time travelling to the temple in Jerusalem, which was the only place where sacrifice could be offered. Yet biblical people offered these sacrifices gladly, embracing them as a way to demonstrate love and loyalty to God and thus to seek a closer relationship with Him.

Today, however, we shrink back from offering the spiritual sacrifices of Christian life—those more comprehensive gifts of time, work, money, love, and self-denying obedience that God desires from us. These are even more costly than Old Testament sacrifices, requiring the dedication of one's whole self as an offering to God. Focusing on this cost, we shy away from these sacrifices as burdens, but this is shortsighted. To an even greater degree than Old Testament offerings, these Christian sacrifices bring benefits incomparably greater than their costs. They open our lives to God's healing presence. They usher us into communion with Him—friendship with God that fills our lives with joy, peace, meaning, and fulfillment. And these benefits have no end; they continue past death into eternity. As St. Paul says in one of his epistles, "the momentary lightness of our affliction is working for us an exceedingly, extravagantly eternal weight of glory" (2 Cor. 4:17).

Now, let us return to the priesthood. From ancient times to today, sacrifice has been inseparable from priestly ministry. In the Old Testament, the priests' primary job was to offer sacrifices (food offerings) to God at the temple; they would receive gifts of meat, grain, oil, and wine from the people and then offer these on the altar, where the fire would turn the offerings into a smoke that ascended to heaven. These gifts were an expression of hospitality toward God, expressing the same warm and inviting message as an extravagant dinner offered to an honored guest.

In the Church, all of us form a "royal priesthood" together, and our lives form a temple in which much more significant sacrifices are offered (1 Pet. 2:5, 9). As a people of priests, we are all called to offer God gifts of friendship and welcome, directing to Him the same kind of regard we show in human relationships. By offering Him loving obedience, we show that His needs and wishes are more important to us than our own—as we do with our closest friends and family. By offering our money and care to the poor, we demonstrate compassion for God's beloved children—just as we might care for our friends' children as an extension of our love for them. By making time for God in worship and prayer each day, we show that we want Him in our lives—just as we intentionally make time for our friends and family in order to keep them close.

With regard to human relationships, the love in our hearts eclipses the cost in time, money, and effort. The same can be true for the sacrifices we offer to God. In fact, this is what God really wants from us—not mere duty and drudgery or some kind of holy masochism, but a deep and abiding love that elevates us above worldly concerns into communion with the Holy Trinity. As St. Paul says simply and beautifully, "God loves a cheerful giver" (2 Cor. 9:7).

Within the royal priesthood of the Church, those of us who are called to ordained ministry as priests lead the community in this holy offering of our lives. We must not only teach this path of salvation in words but must also model it in our lives, making even bolder and more intense gestures of commitment toward God, as examples for our flocks. The costs of the priesthood are great, yet if we are open to it, the grace of the Holy Spirit will fill our hearts with a holy love that makes these costs easy to bear. Our Lord Himself promised that He will bear the yoke with us, making it light: "Come to me, all who labor and are heavy laden, and I will give you rest. Take my yoke upon you and learn from me, for I am meek and humble of heart, and you will find rest for your souls, for my yoke is easy and my burden is light" (Matt. 11:28–30).

Brothers and sisters in Christ, let us embrace the costs of Christian Faith joyfully. Let us reach out to God with extravagant displays of love and loyalty. And when one of our sons receives that nudge in his heart calling him to the Lord's service, let us encourage him to seek God's will without reservation, offering himself to the One who reciprocates all our gifts with incomparably better blessings.