Glory to God for Autumn 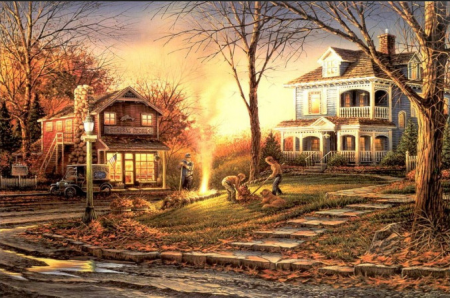 This reflection is by  Alumnus Archpriest Steven Kostoff (Master of Divinity ’81), pastor of Christ the Savior-Holy Spirit Orthodox Church, in Norwood, Ohio. He references the Akathist Hymn titled, “Glory to God for All Things,” also sometimes known as the “Akathist of Thanksgiving.” This remarkable hymn, attributed to Metropolitan Tryphon (Prince Boris Petrovich Turkestanov, +1934), was found among the effects of Protopresbyter Gregory Petrov, upon his death in a prison camp in 1940. The most commonly used title for the hymn was taken from the words of St. John Chrysostom, as he lay dying in exile—words of praise arising from amidst terrible sufferings.

Fall officially begins at 4:02 p.m. (East Coast time) on Friday, September 22. And that means later today. From my personal—and, admittedly, “subjective”—perspective, there is nothing quite like the fall among the four seasons. For me, one of this season’s greatest attractions is found in the flaming red, orange, yellow, and golden leaves that transform familiar trees into a series of neighborhood “burning bushes,” each one seemingly brighter than the other. When combined with a piercing blue sky on a sunlit day and a certain crispness in the air, I find myself more vividly aware of the surrounding world and thankful for God’s creation.

On a somewhat more “philosophical note”—more apt to emerge, perhaps, on an overcast, windswept day—we may realize that this “colorful death” signals the fleeting nature of everything beautiful in this world, “for the form of this world is passing away” [1 Cor 7.31]. And yet this very beauty, and the sense of yearning that accompanies it, is a sign of the beauty ineffable of the coming Kingdom of God and our restless desire to behold and experience that beauty.

Growing up on a typical city block in Detroit, I distinctly recall a neighborhood “ritual” that marked this particular season: the raking and burning of leaves that went on up and down the entire block once most of the leaves had spiraled and floated to the ground. Everyone on the block raked the leaves down toward the street and into neatly formed mounds of color that rested alongside the curb. Then they were lit, and the task of raking now became that of tending and overseeing the piles of burning leaves. This usually occurred after dinner for most families, but one could still see the shimmering waves of heat that protected one from the early evening chill and the ascending ashes rushing upward. Please momentarily forgive my politically incorrect indifference to the environment, but I thoroughly enjoyed those small bonfires near the curb as the pungent smell of burning leaves filled the air. This unmistakable smell would, as I recall, linger in the air for a couple of weeks or more as different neighbors got to the task at different times.

The entire scene embodied the wholesomeness of a 1950s first-grade reading primer, as “Mom” and “Dad,” together with “Dick” and “Jane” (and perhaps “Spot,” the frisky family dog) smilingly cooperated in this joint, familial enterprise. The reading primer would reformulate this “celebration” of healthy work and a neatly ordered environment into a staccato of minimally complex sentences: “See Dad rake”; “Dick and Jane are raking too”; “Here comes mom!” This all served to increase the budding student’s vocabulary while reinforcing a picture of an idealized—if not idyllic—American way of life.

Since my parents were peasants from a Macedonian village, we never quite fit into that particular mold—especially when my mother would speak to me in Macedonian in front of my friends! And yet I distinctly remember teaching my illiterate mother to read from those very “Dick and Jane” primers so that she could obtain her American citizenship papers, which she proudly accomplished in due time.

Before getting too nostalgic, however, I will remind you that this wholesome way of life— something of an urban idyll—was taking place at the height of Cold War anxiety. This, in turn, evokes another clear memory from my youth: the air raid drills in our schools that were meant to prepare us and protect us from a Soviet nuclear strike. (Khrushchev’s shoe-pounding exhibition at the United Nations, together with his ominous “We will bury you!” captured the whole mood of this period.) These carefully executed air raid drills were carried out with due solemnity and seriousness—lines straight and no talking allowed! We would wind our way down into a fairly elaborate—if not labyrinthine—series of basement levels that were seemingly constructed, and thus burdened, with the hopeless task of saving us from nuclear bombs! We would then sit in neatly formed rows monitored by our teachers (apparently oblivious to the real dangers of the Cold War world) until the “all clear” signal was given, allowing us to file back to our classrooms. Thus did the specter of the mushroom cloud darken the sunny skies of “Dick” and “Jane’s” age of innocence.

I must acknowledge that my short nostalgic digression does not offer a great deal for reflection. So as not to entirely frustrate that purpose—and because I began with some brief reflections on the created world—I would like to offer some of the wonderful praises of the beauty of the world around us from the remarkable Akathistos Hymn, “Glory to God for All Things.”

This hymn, which has become quite popular in many Orthodox parishes, is said to have been composed by an Orthodox priest when he was slowly perishing in a Soviet prison camp in 1940. In unscientific, yet theological-poetic imagery, he reminds us of what we are often blind to: God’s glorious creation. Would he have “missed” all of this if his life were as free as ours are to be preoccupied with daily concerns and cares that leave no time or room to look around in wonder?

O Lord, how lovely it is to be Your guest. Breeze full of scents; mountains reaching to the skies; waters like boundless mirrors, reflecting the sun’s golden rays and the scudding clouds. All nature murmurs mysteriously, breathing the depth of tenderness. Birds and beasts of the forest bear the imprint of Your love. Blessed are you, mother earth, in your fleeting loveliness, which wakens our yearning for happiness that will last forever. In the land where, amid beauty that grows not old, rings out the cry: Alleluia! [Kontakion 2].

You have brought me into life as if into an enchanted paradise. We have seen the sky like a chalice of deepest blue, where in the azure heights the birds are singing. We have listened to the soothing murmur of the forest and the melodious music of the streams. We have tasted fruit of fine flavor and the sweet-scented honey. We can live very well on Your earth. It is a pleasure to be Your guest. [Ikos 2].

I see Your heavens resplendent with stars. How glorious You are, radiant with light! Eternity watches me by the rays of the distant stars. I am small, insignificant, but the Lord is at my side. Your right arm guides me wherever I go. [Ikos 5].

His words bring to mind Dostoevsky’s enigmatic phrase: “Beauty will save the world.”