“Healed to Rise Up and Walk”: Homily for the Sunday of the Paralytic in the Orthodox Church 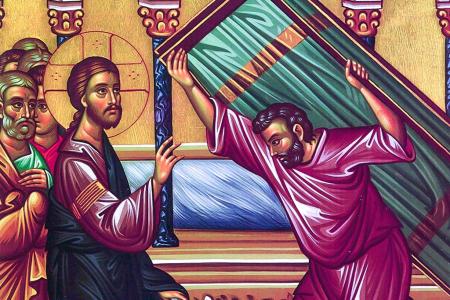 By the Reverend Dr. Philip LeMasters

Father Philip is Professor of Christian Ethics here at St. Vladimir’s, and a member of the Board of Trustees. He also is Professor of Religion and Director of the Honors Program at McMurry University in Abilene, Texas, and the pastor of St. Luke’s Orthodox Church. Father Philip is the author of several books in the area of moral theology, most recently, The Forgotten Faith: Ancient Insights for Contemporary Believers from Eastern Christianity (Cascade Books 2013). He has been an invited participant at recent international Orthodox consultations on peace ethics in Greece, Romania, and Syria. A graduate of Baylor University and Rice University, he holds a Ph.D. in Christian Theology and Ethics from Duke University and an M.A. in Applied Orthodox Theology from the University of Balamand.

1 After this there was a feast of the Jews, and Jesus went up to Jerusalem. 2 Now there is in Jerusalem by the Sheep Gate a pool, which is called in Hebrew, Bethesda, having five porches. 3 In these lay a great multitude of sick people, blind, lame, paralyzed, waiting for the moving of the water. 4 For an angel went down at a certain time into the pool and stirred up the water; then whoever stepped in first, after the stirring of the water, was made well of whatever disease he had.

5 Now a certain man was there who had an infirmity thirty-eight years. 6 When Jesus saw him lying there, and knew that he already had been in that condition a long time, He said to him, “Do you want to be made well?” 7 The sick man answered Him, “Sir, I have no man to put me into the pool when the water is stirred up; but while I am coming, another steps down before me.” 8 Jesus said to him, “Rise, take up your bed and walk.” 9 And immediately the man was made well, took up his bed, and walked. And that day was the Sabbath.

10 The Jews therefore said to him who was cured, “It is the Sabbath; it is not lawful for you to carry your bed.” 11 He answered them, “He who made me well said to me, ‘Take up your bed and walk.’” 12 Then they asked him, “Who is the Man who said to you, ‘Take up your bed and walk’?” 13 But the one who was healed did not know who it was, for Jesus had withdrawn, a multitude being in that place.

14 Afterward Jesus found him in the temple, and said to him, “See, you have been made well. Sin no more, lest a worse thing come upon you.” 15 The man departed and told the Jews that it was Jesus who had made him well.

We do not like to be dragged down or held back by problems that we cannot solve. Whether it is our own health, a broken relationship with others, or a complex set of circumstances over which we have little control, it is very frustrating to know our weakness before seemingly insurmountable challenges.

That is surely how the invalids, blind, lame, and paralyzed felt as they waited for the chance to be healed by being the first to reach the pool of water troubled by the angel. Due to their illnesses, many must have despaired over ever being healed. The man who had been paralyzed for 38 years was one of those, for there was no one to help him move toward the water. Here we have an image of humanity before the coming of Christ. The Jews had a Temple in which animals were sacrificed, and the pool provided water for washing lambs before they were offered to God. This scene occurs at the Jewish feast of Pentecost, which commemorated Moses receiving the Law, which was given by angels.

Fallen humanity, however, remained spiritually weak and sick. They lacked the strength to fulfill God’s requirements, and certainly could not conquer death, the wages of sin for all those who have fallen short of the glory of God. The sacrificial system of the Temple foreshadowed the great Self-Offering of our Lord on the Cross, but did not heal anyone from the ravages of spiritual corruption or raise anyone from the grave. It was a great blessing for the Jews to have the Law, but surely also a tremendous frustration not to have the strength to obey it fully. Only Christ Himself fulfilled the Law, which is why He can call and empower us to be perfect as our Heavenly Father is perfect. (Matt. 5:48)

In contrast, the paralyzed man represents all who lack the power to move themselves to complete healing, to find the fulfillment of our common human calling to become like God in holiness. Notice that he did not call out to Christ to help him; instead, the Lord reached out to him, asking “Do you want to be healed?” That may seem like a strange question, for presumably anyone waiting by a pool for healing after 38 years of illness would want to be made well. But think for a moment about how we have all learned to adapt to our favorite sins, how we have become comfortable with whatever forms of corruption have become second nature to us over the years. By virtue of coming to Church, we are apparently religious people, but that does not mean that we truly want to be healed. For to be healed means obeying the Lord’s command to this fellow: “Rise, take up your pallet, and walk.” It requires making the effort to rise up in obedience, to be transformed personally in how we live each day, and to grow in holiness.

It would not have sufficed for that man to have remained on his bed and have warm feelings about how Christ had healed him. Just as anyone who lies motionless for a long time will become weak and unable to rise up and walk on his own power, the same will be true of us spiritually if we try to rest content with simply believing ideas about God or having positive emotions about Him. If we are not gaining strength by actually serving Him faithfully, we will become paralyzed and unable to cooperate with our Lord’s gracious healing energies. Any spiritual health that we claim in that state will be a figment of our imagination.

The good news is that the Lord does not simply provide us with a set of rules to follow or services to perform. He makes us participants in Himself by grace. He unites us to Himself, raising us up with Him from slavery to sin and death to the great dignity of those who share in His eternal life. The Savior makes us members of His own Body, the Church. He is the Bridegroom and we are the Bride. He makes us radiant in holiness, like an iron left in the fire of the divine glory. That is how He heals us such that we have the strength to obey His command to get up from our bed of corruption and move forward in a blessed life of holiness.

Though we may not yet have the eyes to see it, this healing and strengthening of our humanity happens to this day through our life in the Church. In our reading from Acts [9:32–42], St. Peter heals a paralyzed man and commands him to get up. He even raises a woman from death. Peter did not do this by his own power or authority, but because the Lord was working through him. He said to the paralyzed man, “Jesus Christ heals you…” Throughout Acts, we read of how the Lord works through His Body, the Church, to enable people to participate personally in the new life of the resurrection that He shares with us by grace.

That is not, however, a life of merely having our names on a church membership roll or of calling ourselves Orthodox Christians. If our faithfulness extends only that far, we will become as weak as a person who remains immobile in bed and refuses to stand up and walk. We must not be like those poor souls waiting by the pool for someone else to move them into the healing water. On His own gracious initiative, Jesus Christ has given each of us the strength to overcome the paralysis of sin through His resurrection. He does not simply give us commands; He gives us Himself. And our life in His Body, the Church, is truly our participation in Him.

We receive His healing of our souls when we humbly repent of our sins in Confession. We are nourished for the life of the Kingdom by His Body and Blood in Holy Communion. When we offer our time, energy, and resources to support the ministries of the Church, we rise up from selfishness to participate in the abundant generosity of the Lord. When we stop thinking of ourselves as isolated individuals and instead as members of a Body with a common life in Christ, we will be able to love and serve one another in ways that will open us to His strength personally and collectively in powerful ways.

In the joy of the resurrection, we must learn to see that embracing our life together in Christ is an essential dimension of obeying His command to “Rise, take up your pallet, and walk.” He calls each of us to turn away from the paralyzing weakness of selfishness and laziness that would make whatever sins we have become comfortable with appear more important than serving Him in His Body, the Church, where the glory and power of the resurrection are fully present.

Think about that for a moment. Pascha is not an isolated event that happened long ago, but an entrance into the new day of the Kingdom of Heaven, which is fully open to us in the worship and common life of this parish. The Savior calls each of us, weakened and held back by the corruptions of sin, to get up and move forward in the blessed life for which He made us in His image and likeness. That is why He died and rose again, to raise us up with Him for a life of holiness, to restore us to the ancient dignity of Paradise.

May this season of Pascha be our entrance as a parish into the joy of the Kingdom. That will happen when we rise up, from whatever corruptions are holding us back, to a life of obedience in serving Him and one another in His Body, the Church. That is the only way to answer the question that He asks each of us today and every day: “Do you want to be healed?”

Reprinted with permission by the author: © 2012-2017 Fr. Philip LeMasters · All Rights Reserved.