Homily: “The Publican and the Pharisee” 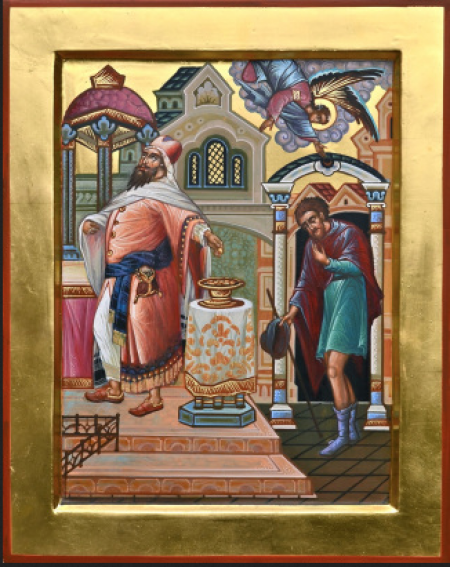 We are pleased to share a Homily on Luke 18.10–14 by Priest Paul Coats, Alumnus (M.Div. ’08), Assistant Priest at St. Anthony the Great Orthodox Mission, Rock Hill, SC. As we anticipate our Lenten journey, his thoughtful words on “The Sunday of the Publican and the Pharisee” offer us a lodestar to understand how to “fulfill all righteousness,” as the Gospel commands.

[9] He also told this parable to some who trusted in themselves that they were righteous and despised others: [10] “Two men went up into the temple to pray, one a Pharisee and the other a tax collector. [11] The Pharisee stood and prayed thus with himself, `God, I thank thee that I am not like other men, extortioners, unjust, adulterers, or even like this tax collector. [12] I fast twice a week, I give tithes of all that I get.’ [13] But the tax collector, standing far off, would not even lift up his eyes to heaven, but beat his breast, saying, `God, be merciful to me a sinner!’ [14] I tell you, this man went down to his house justified rather than the other; for every one who exalts himself will be humbled, but he who humbles himself will be exalted. (Luke 18.10–14)

In today’s Gospel, Christ tells what must be a shocking parable to many who were doing their best to obey God, as good Jews, and be obedient to the law to the best of their ability. In this parable, it seems that all the best efforts of those trying extra hard to follow God, the Pharisees, are said to be of little value.

With this parable and others like it, for some Christ shattered their whole belief system. He takes someone despised as a lawless sinner, a tax collector, and says that this man can be justified simply by a sincere acknowledgment of his sin, and a request for mercy. This must have been outrageous to those who were convinced that strict obedience to God’s law was the only way to please God and have salvation. After all, isn’t this what all the prophets, beginning with Moses, had said? Isn’t this what God had been communicating with his people all along?

In regard to zealously following the Law and trying to obey the commandments, Christ was on the side of the Pharisee! We must remember that at the very beginning of his teaching ministry, Christ said, Do not think I have come to abolish the Law and the Prophets, I have come to fulfill them. And further, whoever relaxes the least of these commandments and teaches men so, shall be called least in the Kingdom of Heaven; he who does them and teaches others to do so, will be called great in the Kingdom of Heaven. Christ was pleased with the Pharisee’s good works.

But listen to his next words: For unless your righteousness exceeds that of the scribes and Pharisees, you will never enter the kingdom of heaven. And Christ goes on to talk about the kind of righteousness that exceeds that of the scribes and Pharisees: not only do not kill, but do not even be angry with another. Not only stay chaste in marriage, but do not lust—you must be chaste in your mind, too. Instead of being fair (an eye for an eye, a tooth for a tooth), suffer injustice. Instead of loving those who love you, love those who hate you. And lest we think the bar is set too high, he simply confirms it: You must be perfect, as your heavenly Father is perfect.

This is the radical inner righteousness that Christ requires of us.

What was the problem here?

One of the things I learned very early growing up in rural northern Illinois was how to find the North Star in the night sky. We would sometimes be out camping or even hiking in the woods at night, and we needed a way to orient ourselves and find our way back home, back to the road, or back to the camp. If we tried to get a sense of direction from things on earth, things around us, the landscape, some lights in the distance, or trees, we were very likely to get lost in the dark. . . things didn’t seem as they really were at night, and so forth. But if we could find the North Star, we could find our way. In other words, it took a permanent, unchanging reference point to find our way; the moon didn’t work, it changed locations constantly . . . the other stars didn’t work, they also changed directions. But the North Star is always in the same location, directly north, and never moves.

And this was disastrous, because in his sinfulness and pride, this led to exalting himself above others, inwardly condemning others, and despising them. And so therefore he really blew it. Because of this wrong turn, all his good works were useless, because they strayed from the ultimate goal. Not only that, but he had turned 180 degrees and was using his works of righteousness as a weapon against others, to condemn them, and to despise them.

The tax collector, on the other hand, saw no one but God. He wasn’t looking at the Pharisee . . . he didn’t even physically look up to God, out of shame. But this was because God was too present in his vision. It’s safe to say the only thing in his mind, the only thing in his inner vision, was God and his righteousness. And making God his reference point, he was able to honestly pray the prayer, God, be merciful to me, a sinner. And here, we have what is essentially the Jesus Prayer, one more time. In recent Sundays we heard it from the blind beggar, we heard it from the Canaanite woman, and today we have it from Christ’s own words, which he put in the mouth of the tax collector as he tells this story.

This story that Christ tells should never be used to somehow try to promote “having faith” over and against good works. This is a false opposition. Christ commanded good works. Good works are meant to be a means to learn true love of God and others, just as the Law was also meant as a means to learn to love God, for the Jews. Orthodox spirituality teaches that we cannot cultivate love for God in our hearts without overt acts of mercy and service to others. In two weeks, we will hear the parable of the Last Judgment to drive this home.

So today Christ warns us strongly about comparing ourselves to others. . . using others, instead of God, as our reference point. I have found this to be very subtle. Do you find yourself subtly judging others? This is an inward disposition that leaves no room for true love. It’s destructive to others because it is not loving them; it’s destructive to ourselves, because it breeds a confidence in oneself, a trusting in ourselves for our own salvation.

Not everyone struggles with this. There are those who have been given the grace of compassion and full acceptance of others. But for those of us who do struggle with it, it is one of the hardest things to stop. When we see someone who bothers us, or who is so different from us in personality and interests and approach, we may almost involuntarily and automatically judge that person. But we become the Pharisee in the parable when we do that.

I have one suggestion in this regard: one of the quickest cures for this is to pray for people we are tempted to judge, and ask God to bless them with all the same things that we ask God to bless us with. Inwardly, then, we’re giving to that person, serving them, and not judging and condemning them. It’s a double blessing—we are released from the sin of comparison, judgment, condemnation and pride, and they are the recipients of a prayer heard by God, and God will honor that prayer in the way best for both the one who prays and the one prayed for.

Brothers and sisters, we are in the preparatory Sundays leading up to Great Lent. We will soon be saying the prayer of St. Ephraim, which ends with “grant me to see my own transgressions, and not to judge my brother.” Let us begin to prepare, then, by trying to set aside the comparing of ourselves to others, completely. Let us set our eyes on the true reference point, our Lord Jesus Christ. The more we do this, the more we will be able to pray the prayer of the tax collector with sincerity, God, be merciful to me, a sinner. We will not inwardly exalt ourselves over others, and our good works will be a blessing to us and to others and will lead to the love of God. May Christ strengthen us all for this. AMEN.