Icons in Sound, and the Music of Father Sergei Glagolev 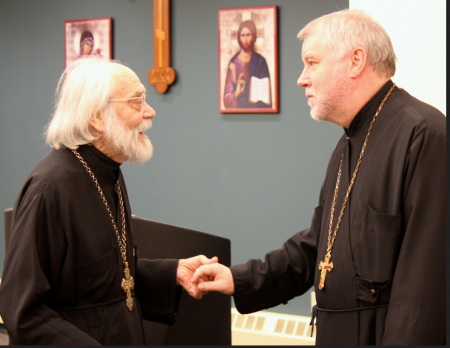 On Saturday, February 10, 2018, at 6:30 p.m., the seminary Chorale will commence its “Orthodox Masterpieces” series by singing Great Vespers in Three Hierarchs Chapel, featuring select compositions by Archpriest Sergei Glagolev. Father Sergei is noted for his pioneering work in introducing English-language musical compositions into Orthodox Christian church services—inspired hymnography with a uniquely American sound. Following the liturgical service, fellow worshippers are invited to hear an educational talk by seminary faculty and to enjoy a light reception.

As a prelude  to the event, faculty member Harrison Russin wrote the following essay. He especially emphasizes Fr. Sergei’s insistence upon the primacy of the text in liturgical musical composition, and upon the dynamic interplay between the meaning of a musical composition and its effect upon the listener, and the response of the listener

It is commonplace to find Orthodox church music described as “icons in sound” (Google the phrase if you want proof). This saying demonstrates how Orthodox Christians think visually, sometimes at the expense of the aural—a tendency that goes beyond the Orthodox Church. The field of sound studies has been developing since the early 2000s, and one of its unifying aspects has been to “temper a tendency to think of hearing as a ‘secondary sense’—secondary, that is, to vision” (from the Grove Music Online article on Sound studies). Our vocabulary is indeed replete with multiple terms of sight—gaze, stare, look, gape, scrutinize, ogle, eyeball; but we have few similar terms for hearing. Sight indeed imposes itself differently than sound, and it is a mistake to simply resort to describing church music as “sounded icons” when the two media are different in nature.

Furthermore, we have difficulty understanding what an icon is. The icon is undoubtedly the most distinctive artwork of the Orthodox Church, but the term does not solely signify the panel icons we are used to seeing in churches—not to mention greeting cards, refrigerator magnets, and bracelets. The earliest Christian considerations of icon include materials and representations we rarely think about today—the very architecture of the church building, the decorations on the chalice, the ornate knee-high chancel barriers (which later developed into the modern iconostasis), the processional cross. While icons are often called “windows into heaven,” a more appropriate metaphor is the mirror. As Anna Kartsonis writes,

The icon … remains both constant and flexible in communicating the interrelation and interaction between the prototype, its representation, and the faithful. It witnesses and confirms the objective and multiple reality of the event it represents, and its effectiveness for the beholder (“The Responding Icon,” 75–76).

In other words, the icon’s essence consists of both the image and its beholder, the text and its reader, the music and its listener.

I offer this as a prelude for approaching the musical compositions of Fr Sergei Glagolev, whom St Vladimir’s Seminary will be honoring on Saturday, February 10, 2018, with a vespers service featuring his music. Orthodox Church music has the tendency to invoke sentimentalism and nostalgia. We must carefully consider what that means for the reality that this “icon” bears witness to. That attachment is the underlying reason for most defenses of singing Orthodox music in its original language: “It just sounds holier in Slavonic!” Fr Sergei, in his compositions, has always pushed against sentimentality. That is not to say his music is not beautiful—he displays compositional mastery in his diverse use of harmonies, voicing, and text setting. But, for Fr Sergei, the text holds primacy, and his musical settings serve the text. His music is written with American Orthodox in mind, and its essence—consisting of the music and its listener—obtains an awareness of the principles of Orthodox church singing and liturgy.

Take, for example, his setting of the communion hymn (“koinonikon”) for the Nativity of Our Lord—“The Lord Has Sent Redemption to His People.” The usual presentation of the communion hymn in the Slavic tradition is to sing it as recitational text on one chord. Fr Sergei instead gives us an alternation between a refrain and the psalm verses, an ancient liturgical formula still preserved in our prokeimenon and alleluia verses, as well as other hymns like “Blessed is the man” and the Polyeleos. The musical meter here is telling—we have four bars of four, created by repeating the first line (“The Lord has sent redemption”) as necessary. Such regular meter is infrequent in the “traditional” Orthodox hymns of the Greek and Slavic traditions (and when we do have them, it is usually a giveaway that the composition is of recent, usually 19th– or 20th-century, vintage). The modal character of the harmony and melody fits in with the 19th-century harmonizations of Russian chant, as it avoids the sharpened seventh scale degree. The voicing takes its start from typical Slavic formulation, with the tenor and soprano lines in parallel sixths, but the bass and alto are static in comparison, not taking any leaps. The style is idiosyncratically American but drawing upon historical and national references which inform the Orthodox experience in America today. It is inclusive in its scope, drawing the listeners—cradle, convert, immigrant, native—to witness to the Lord’s promised redemption for his people.

I think when most people speak of “icons in sound” they have in mind a strict discipline associated with Orthodox liturgical composition, the kind of censorship and rigor that barred Rachmaninoff’s All-Night Vigil from being performed in church, the kind of unemotional hieraticism we are used to seeing in icon depictions of saints. But Fr Sergei’s music opens another realm of meaning of “icons in sound,” icons which embrace the listener and reflect the jubilant reality of the Lord’s redemption