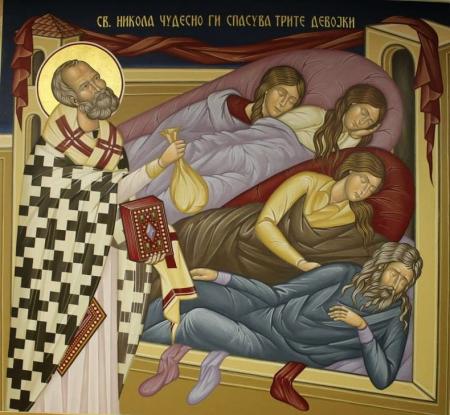 17 And He came down with them and stood on a level place with a crowd of His disciples and a great multitude of people from all Judea and Jerusalem, and from the seacoast of Tyre and Sidon, who came to hear Him and be healed of their diseases, 18 as well as those who were tormented with unclean spirits. And they were healed. 19 And the whole multitude sought to touch Him, for power went out from Him and healed them all.

In the name of the Father, the Son and Holy Spirit. Amen.

“They only have themselves to blame.”

“Now they want to take what I have worked so hard for.”

“I’m barely making it as it is, let alone give it to someone who doesn’t know the value of a dollar!”

These are things we hear often when it comes to the world and it’s stance on those in need. Yet, today we celebrate our beloved St. Nicholas, an icon of Christian generosity, kindness and mercy. And we venerate St. Nicholas because is it not easy to be generous, kind and merciful.

In fact, it is extremely difficult.

A long time ago, there was a man who had fallen on very hard times. He had been wealthy, and important. Business had been great and he had enjoyed the very best that money could buy.

But everything had changed. His business had failed, his investments had gone bad, and he was down to the very end of his savings. He had lost it all, and now he feared that he would starve.

So, he came up with a desperate plan…a desperate and horrible plan. In order to survive, he planned to sell his three daughters into slavery. The very worst kind of abusive slavery you can imagine.

But as the man went to bed, when everything was quiet, he must have been in anguish. As he thought of his plan to sell his daughters, thought of the merchants, the haggling, the tears, and the large sum of money, did he think about starting a new life for himself? But how could he ever live with himself? How could he carry on knowing that he sold his own beautiful children into slavery?

Thank God, I don’t think any of us here are in quite as serious a situation. But perhaps we are not total strangers to this man’s struggle.

But Christ does not abandon us in the haunting knowledge of our sins. Today, Christ stands in our midst. He stands in the midst of a great multitude of people from Judea, and Jerusalem, from the seacoast of Tyre and Sidon, from Crestwood and Yonkers.

Today we stand with that multitude of people needing healing from illness and from spiritual torment. And, we, along with the entire multitude, seek to touch Christ, to be healed by the Physician of souls and bodies. Today we not only touch Christ, we receive his very Body and Blood, and we are healed. And in that healing, we see just how wealthy we are.

We can rationalize it all too easily by saying “I have worked for everything I have. Nobody gave me anything!”

With a closer look, those of us who are blessed to be in the positions we are, may want to look at our answered prayers that we recite or chant during our worship. We have said these petitions just a few minutes ago:

For our deliverance from all affliction, wrath, danger and necessity, let us pray to the Lord.

For all things good and profitable for our souls and peace of the world, let us pray to the Lord.

Help us, save us and have mercy on us and keep us O God by thy grace.

Take a moment and reflect on those words and all of the other petitions we pray every Divine Liturgy. Our hard work and the pulling ourselves up by our bootstraps may not be the heroic and solo effort we think it is. Our ability to achieve and to succeed is granted by God—our peace, heath and safety, an answered prayer. Our success or status is a result of being helped, saved and kept by God’s grace.

It is easy to focus on what we think are unanswered prayers as opposed to focusing on what prayers and requests have been answered. In many cases, they have been answered abundantly. With this abundance we are called to use it to emulate Christ’s mercy.

Truly, Christ has helped us, he has saved us, and he has mercy on us, and he keeps us by His grace. For every good gift, and every perfect gift is from above.

Having received such wealth, such blessings, we follow Christ. We follow Christ out into those places where we find those multitudes who are in need of healing and mercy and salvation.

Today we bring the mercy of Christ to the poor. For Jesus does not tell people to get a job, rather Christ blesses the poor as he says theirs is the kingdom of God.

Today we bring the generosity of the Lord to the hungry. For Christ does not call them lazy, but he blesses the hungry and promises that they will be filled.

Today we bring the comfort of Christ to the weeping. For he did not tell them to “get over it and toughen up,” but rather Jesus blesses them saying that you will have joy.

We follow Christ by giving our support to the poor.

We follow Christ by inviting the lonely and the forgotten to seats at our tables and by our fireplaces.

We follow Our Lord by comforting those who weep with a kind word, gesture or visit.

Now is that time for the mercy and love and generosity of Christ.

That man, long ago, who had planned on selling his daughters. Little did he know, but God sent someone to save him from his sin. St. Nicholas heard about what the man was going to do. And instead of publicly humiliating the man, or accusing him of planning evil, St. Nicholas secretly dropped a bag of money through an open window at the man’s home.

This is how Christ calls us to love.

In this season of Advent, we embrace the fast so that we can share what we have with others.

In this season of Advent we pray to God for the courage and the grace to love everyone around us.

In this season of Advent, we follow Christ in acts of mercy, and kindness and generosity.

Holy Father Nicholas pray to God for us.

Deacon Larry Soper is a 2nd-year Seminarian in the Master of Divinity program. He hails from North Canton, Ohio, and his home parish is St. George Serbian Orthodox Church, Serbian Orthodox Diocese of Eastern America. Prior to coming to the Seminary, he spent a decade working at a renowned drug and alcohol rehabilitation center in Akron, Ohio, where, he says, he “discovered what living the gospel really means” by working among the poor, the disenfranchised, and those with physical and mental illness.