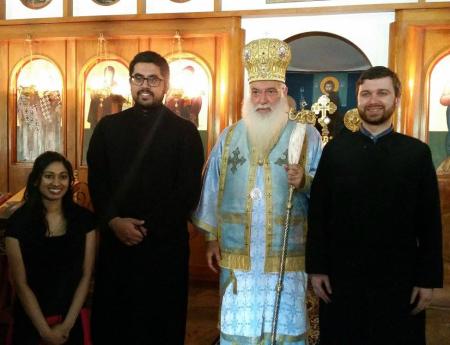 During Holy Week and Bright Week, 2015, St. Vladimir’s seminarians Edward Hunter, Lijin Raju, and I had the unbelievable opportunity to travel to Kenya as part of a mission trip sponsored by the Orthodox Christian Mission Center (OCMC), and led by Executive Director Fr. Martin Ritsi. As the result of a generous grant, the three of us were able to travel to Kenya without any expenses of our own. The trip was one that we will never forget, as it has left an imprint on all three of our hearts.

Our first week in Kenya was spent in Nairobi at the Orthodox seminary, which is run by His Eminence Archbishop Makarios of Kenya. The entire time we were there, the staff and students were exceptionally hospitable and His Eminence always went out of his way to ensure that we were taken care of. One of the days, Archimandrite Philip Mugadizi (SVOTS ‘03), told us about the work Archbishop Makarios has done as well as what he hopes to accomplish in the future.

We participated with our brother seminarians in the Holy Week services, which the priests served using a mix of English, Greek, and Swahili. On Great and Holy Friday, after we processed with the tomb of Christ through the impoverished neighborhood of Kibera, one of the largest slums in the world, Archbishop Makarios professed, “Jesus has been crucified. But He will rise on the third day. Even if you are in the poorest place, Jesus will rise here also.”

My time at Makarios III Patriarchal Orthodox Seminary worshipping the same Lord and celebrating the same Pascha showed me that the God we all worship is the same one—the same Christ that we all need in order for salvation, the same Christ who has called each of us, as seminarians, to serve in His One, Holy, Catholic, Apostolic Church.

Shawn Thomas is a third-year seminarian in the Master of Divinity program. He is from Chicago, IL, and his home parish is St. Peter’s Jacobite Syriac Orthodox Church.