Music Education in Our Church 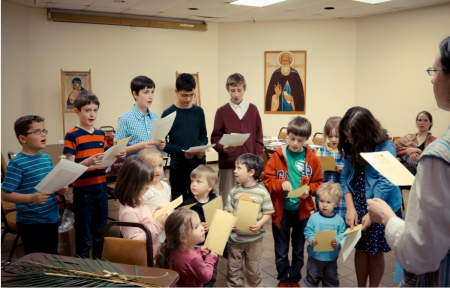 As a newborn, I didn’t breathe for my first two weeks. Perhaps I just didn’t feel like it, I don’t really know the reason. As a result, I was hooked up to a machine that took all the blood out of my body, oxygenated it, and then put it back in. Thinking about it now, it’s pretty cool. It sounds like something out of Star Trek. It went on for a week or two. The only real human interaction I had during that time was with my dad. He would sit next to the contraption I was isolated in and sing to me. Just sing. Eventually, I came home from the hospital. Home was filled with music. My parents, my dad especially, would just walk around the house singing…constantly. My parents were never into the music of the 80’s (I don’t know why), so the music they would often sing was church music. Beautiful hymns.

In the car, the tapes were not Michael Jackson or Van Halen, they were from St. Vladimir’s Seminary. Tuesday nights was choir rehearsal, and both parents would go—which of course meant I went. I could say that I spent my formative years immersed in the music of the Orthodox Church. As a result of this, I always felt very comfortable in the choir loft or at the chanter’s stand. As a kid, I would just stand there. One particular Sunday, however, all that changed. I went up into the choir loft as I would often do, just wandered up there, and the new choir director told me to leave. I wasn’t allowed there because I was too young. I remember it vividly—I was crushed.

Across the country, school districts have money problems that cause cutbacks in their music education programs. Programs that supported three or four music teachers are now relying on one to do all those jobs. As a result, the kids miss out on some wonderful opportunities. In parish life, if kids are talented, their parents might suggest that they sing in the choir. Unfortunately, the kids that are not considered talented are left out. More often than not, kids experience what I experienced. As a result, our youth feel left out liturgically.

During college and post-college years, I spent my summers as a counselor at the Antiochian Village. The most beautiful choir I have ever heard is found there: over 300 children singing to the glory of God, in unison. Perhaps the most amazing thing is how well they know the music of our church. When on the Challenge Course, a group will often sing a hymn while hiking or following the completion of a task. When walking from one activity to another, they sing to St. Raphael. During the morning program chanting lessons, all they want to sing is their favorite hymn. How many of us can even name their favorite hymn, let alone sing all the words from memory?

Many faith traditions utilize youth choirs. Protestant and Catholic churches often have hymns offered by children’s voices or children’s bell choirs. A close friend from college was the music director of a Roman Catholic Church in the Pittsburgh area. They had one mass entirely led by the children: the children were the choir, the cantors, and sometimes even the piano/organ players. Similarly, in many Antiochian parishes, Saturday nights often bring “Camp Vespers.” The teens of the church sing and chant Vespers just like they would at camp during the summer. This can become the foundation for a youth choir in a parish.

It is important to note that calling it “Camp Vespers” is somewhat a misnomer. Vespers is Vespers, though the practice of congregational singing is what is unique to the camp setting. Additionally, we do not want to not exclude children that have not been to summer camp. That said, the idea behind a “Camp Vespers” is what is important. Maybe it begins as a once a month occurrence on Saturdays, then twice a month, eventually every Saturday is “Youth Vespers,” and further down the line it is simply everyone singing Vespers together. The youth choir can then begin participating on Sundays. The children can sing during communion and gradually have the children singing more and more.

The keys to having a successful youth choir are bringing the children together for the first time (possibly the most difficult), strong leadership, and consistency. One way to ensure this is the integration of music education into the current education already happening within the parish. Sunday School can begin each week with singing all together and learning the hymns of liturgy for that week. Additionally, youth participation ensures the continuity of our church choirs. We begin training the next generation of our choirs with our youth. Our youth learn the Divine Liturgy and begin to take ownership of the Church as full and equal participants.

During the Cherubic Hymn we sing:

We who mystically represent the Cherubim, and sing to the life-giving Trinity the thrice-holy hymn, let us now lay aside all earthly cares: that we may receive the King of all, who comes invisibly upborne by the Angelic Hosts. Alleluia, alleluia, alleluia.

How can we keep our children from representing the Cherubim and singing to the life-giving Trinity?

Gregory J. Abdalah is the Youth Pastor of St. George Antiochian Orthodox Church in Phoenix, Arizona and has been working in youth ministry in various capacities for 15 years. Greg holds a Bachelor of Music in Vocal Performance from Duquesne University, Pittsburgh, PA and a Master of Divinity from St. Vladimir’s Orthodox Theological Seminary and is currently in the midst of a Doctor of Ministry from SVOTS. He serves as the President of the SVOTS Alumni Association, and on the SVOTS Board of Trustees.