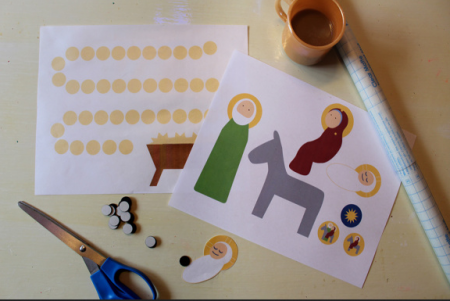 Then as He entered a certain village, there met Him ten men who were lepers, who stood afar off. And they lifted up their voices and said, “Jesus, Master, have mercy on us!” So when He saw them, He said to them, “Go, show yourselves to the priests.” And so it was that as they went, they were cleansed. And one of them, when he saw that he was healed, returned, and with a loud voice glorified God, and fell down on his face at His feet, giving Him thanks. And he was a Samaritan. So Jesus answered and said, “Were there not ten cleansed? But where are the nine? Were there not any found who returned to give glory to God except this foreigner? And He said to him, “Arise, go your way. Your faith has made you well.”

Finally, my brethren, be strong in the Lord and in the power of His might. Put on the whole armor of God, that you may be able to stand against the wiles of the devil. For we do not wrestle against flesh and blood, but against principalities, against powers, against the rulers of the darkness of this age, against spiritual hosts of wickedness in the heavenly places. Therefore take up the whole armor of God, that you may be able to withstand in the evil day, and having done all, to stand. Stand therefore, having girded your waist with truth, having put on the breastplate of righteousness, and having shod your feet with the preparation of the gospel of peace; above all, taking the shield of faith with which you will be able to quench all the fiery darts of the wicked one. And take the helmet of salvation, and the sword of the Spirit, which is the word of God.

The Nativity Fast is not one which we mostly observe, and not one upon which we tend to focus. Maybe that’s because our Nativity Fast has fewer liturgical or traditional observations that help us to focus—as compared to the Great Fast prior to Pascha.

Converts to Orthodoxy have incorporated some of their former Christmas customs into this season, especially in recent years. They’ve kept the tradition of the Jesse Tree, and some have blended visits from St. Nicholas and St. Lucia. Additionally, they’ve introduced Advent calendars, Advent Wreaths with additional red candles to accommodate the length of our Orthodox fast, and even Advent Logs. They’ve even appropriated the word “Advent” itself, which derives from a Latin word meaning “coming” or “arrival.”  And, ready or not, “O come, O come, Emmanuel” is very near!

During this season, we all need to focus on today’s epistle reading: we are in for a fight—Spiritual Warfare. Our life in Christ is at stake! We have all types of “spiritual armor,” so to speak, at our disposal, but often we fail to use it, and we are ambushed easily.

We witness that type of shame when we read in the Gospel about the one who is a sinner bathing the feet of Jesus with her tears and wiping them with her hair. We see the glory when Mary, and countless others down through the ages, chose the “good portion” that would not be taken away, either in this world or the next. Through this shame and to this glory may God in His mercy lead us all!

I am of an age to remember when this time of year was given over—in my former church—to the contemplation of the “Four Last Things”: Death, Judgment, Heaven or Hell. All priests built their sermons around these four last things, just before Christmas.

It would still do us good, in the midst of the “Christmas Rush,” to reflect on the Last Judgment, as this is the season when, as we say in the Nicene Creed, when He comes again to judge both the living and the dead. “O come, O come, Emmanuel!”

Christ, at the end of His public teaching, gave two parables about judgment. One is called the “Parable of the Talents.” It describes the judgment in store for those who posses Christian privileges. They will be judged by the use they have made of the gifts given to them. A stern judgment awaits those who have not used their gifts at all. My Christian friends, this is a judgment for us.

The other is called the “Parable of the Sheep and Goats.” It describes the judgment upon the Gentiles, that is, the outsiders, the people who have not been within the Christian covenant. They are judged by their practice of the natural virtues of kindness—to the naked, to the sick, to strangers, to prisoners—and if they have been good to the naked, the sick, the strangers, the prisoners, they have all unknowingly been near to God, and have been doing kindness to Christ Himself.

And, it would also do us good to reflect upon heaven and hell, among these “Last Things.” Actually, we anticipate them daily, in the here and now. Every act of faith and charity, every movement of the heart and mind towards God, is an anticipation of heaven. The Eucharist we now share is a little sharing in heaven’s worship, and the Holy Spirit working in us is the first fruits of the heavenly baptismal inheritance, the power already of the age to come. “O come, O come, Emmanuel!”

So too, we anticipate hell whenever we isolate ourselves in our pride and selfishness, and make barriers between one another, thus making a barrier between us creatures and our loving Creator! Our life as Christians is one of conflict and ambiguity: we live under grace, and yet sin dies very hard within us! Heaven and hell already do battle, and the conflict between them may be raging within our prayers, as well as within our actions.

The Gospel reading today reminds you and me that we are like “lepers,” separated by our disease of sin from the source of LIFE, the Word made flesh, who touches and heals. In the haste of this hectic season, let us be careful to join the Samaritan and give thanks. “O come, O come Emanuel!”

Note: The image of the Advent Calendar was reprinted from http://manymercies.blogspot.com/. This blogger provides educational resources and instructions for many children’s crafts to help parents raise their children in the Orthodox Christian faith.