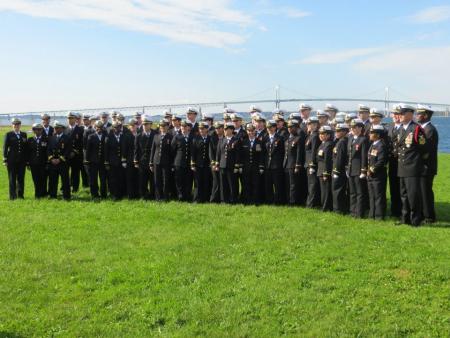 When most people think of preparation for ministry in the context of the Orthodox Church, they think of attending seminary: learning how to sing all eight tones of the Octoechos, how to preach sermons, how to swing a censer, how to minister to young and old in a parish.

How about learning how to put out fires in a burning building, or saving a ship hit by a torpedo from sinking, or getting up at 0430 every morning to run and work your muscles well before dawn, or ministering to believers and non–believers in a combat unit?

I had already completed the requirements in the first paragraph—my M.Div. at St. Vladimir’s—but that sufficed for being an Orthodox priest. I needed the second set of skills in order to embark on another path I have been blessed to tread: that of a chaplain in the United States Navy. The first part of the training by which such skills are acquired is called Officer Development School (ODS), a five–week course in military basics, officer leadership, fitness training, and disaster preparedness. Along with 60 other officers assigned to Class 12110, Uniform Company, I attended ODS at the Naval Station Newport, Rhode Island, from September 9 to October 12, 2012.

Having grown up in the military (both my parents were Marines) and having spent several years in a monastery, I was accustomed to a life marked by routine and by orders; the same was not the case for many of my shipmates when we first started our course. A large part of the ODS experience is militarization, especially important because the officers attending this school are “directly commissioned,” that is, they receive a commission not based on any prior military education or experience, but on the basis of the professional knowledge and experience they bring to the military. All of us in Class 12110 fell into this camp: chaplains, clinical psychologists, nurses, dentists, surgeons, and scientists of all sorts. The Navy needed our skills and talents, but before we could serve our nation’s sailors and Marines, we needed the Navy to show us what it means to be an officer and sailor.

Our days were long and tiring: waking up at 0430 (that’s 4:30 a.m. for civilians), having an hour of PT (physical training) every morning, getting used to all the military acronyms too! Three meals a day, fifteen minutes only allotted for mealtime, no talking, lest we incur the wrath of the Marine drill instructors and Navy RDCs (recruit division commanders) watching our every bite. Wearing our uniforms and preparing them for inspection: this badge must be one quarter inch above the pocket and centered, no more, no less; your bed sheets folded just so; your shower shoes and laundry bag hung on the hook thus. All this attention to detail is important—it helps make one aware of the details in all of our lives as Naval officers, of the small things that can make or break a ship, or save or kill a life in battle or in a hospital. But to me, as a hieromonk in the Orthodox Christian tradition, the attention to detail was very welcome, a sign pointing to the present in the midst of our trials and tribulations throughout the five weeks. “Don’t worry about the inspection tomorrow,” I’d say to myself, “just worry about marching in step right now,” or: “Just focus on your thousand–yard stare right now.” Past and future fled away to reveal simply the present, and simultaneously, simply the presence of God guiding me and my shipmates in our training.

As a chaplain in the U.S. Navy, I enjoy certain privileges, but also must bear certain crosses no other officer must. As a chaplain, I can bypass the chain of command—I have direct access to the commanding officer (CO) (whether he/she be a commander, captain, admiral, depending on the type of command), and the COs confer with chaplains often about the climate of their command, and how their sailors and officers are doing. But as a chaplain, I also am the only officer who has complete confidentiality: if a sailor or Marine comes to me in confidence, I cannot tell anyone else what he or she has said. This is much like confession in the Orthodox Church, but can be a great burden at times, both in the military as well as in the parish. I am called to enter into both the joys and sufferings of others.

This took place even during my training time. One night, after a long day involving me as a chaplain, after keeping my chin up and my military bearing spot on, I retired to my hatch (=my room) after chow (=dinner), shut the door, and just started to cry, and offer up the pain and sorrows that had been given to me in confidence to the one Person I can always talk to, Jesus Christ. One of my shipmates, a nuclear instructor, heard my sobs and knocked on the door, to see if I was all right. I said I would be, but that this was one of the hard parts of the chaplaincy, one of the sacrifices I and other chaplains make for our nation and those whom we serve: to bear their pain in silence and confidence, opening it only to the Lord. My shipmate had not realized until that point the real sacrifice of the Chaplain Corps, and that moment brought us together in greater understanding of how we both were serving our fellow sailors, albeit in different but equally important ways.

Chaplains in the Navy serve our country’s sailors, Marines, and Coast Guard on the spiritual front; but like any other officer or sailor, we too are full Naval officers, and must be ready to help in any way, in any emergency. Part of our training involved passing the 3rd Class Swim Test, which involves: jumping off a 10-foot tower and swimming to safety; being submerged in full khaki uniform, and inflating your trousers and blouse to be life vests; and swimming 50 meters nonstop to safety. We learned how to fight fires onboard ships, and consequently suited up completely in firefighting gear, complete with oxygen tanks and real flames, to put out fires in a simulated ship space. We also learned about water damage control on board the “SS Buttercup,” a ship simulator rigged to give us the experience of a torpedo striking the hull. We started to list about 30 degrees to starboard (=to the right), taking on water, and had to put our book knowledge into practice: bracing breached hatches, turning off valves to burst pipes, deploying hoses to drain flooded compartments. We saved the ship, we grew closer together as a team and company, and we emerged ready to serve our nation’s finest.

On October 12, 2012, we had our graduation ceremony in front of many family and friends. I was very blessed to have my diocesan bishop, The Right Rev. Bishop Michael, and my uncle and aunt, Lt. Col. David Searle, USAF, and Mrs. Jodie Searle, attend the celebrations. The commanding officer of Officer Training Command Newport, Captain Vernon Kemper, beamed at all of us, 61 officers from all parts of the United States, who had come to Newport as individuals, but were leaving as brothers and sisters in the US Navy, and welcomed our guest speaker, Rear Admiral Rebecca McCormick-Boyle, the Chief of Staff, Bureau of Medicine. RDML McCormick-Boyle, a nurse who had trodden the same path as us at ODS some 30 years prior, inspired us to hold on to that spirit of camaraderie and dedication as we embarked on our Navy careers, and our families and friends applauded as we renewed our Oaths of Office.

For me, a bit of a pause had come. Unlike the other 59 officers, I and the other chaplains have one more year of Reserve and parish service before taking up active duty service. Yet the experience of attending ODS confirmed for me the sense of vocation to this rare calling: to be an Orthodox monk, and priest, and Navy chaplain. I don’t know of many others who’ve had this particular combination – in fact, right now, I’m the only such chaplain the U.S. Navy. But by God’s grace, I hope to spend many years being a presence of love, comfort, consolation, and confidence to all who serve our nation and put their lives in harm’s way so that ours might not be exposed to such dangers.

Anchors aweigh! Hope to see you in the Fleet!

Hieromonk Kilian (Sprecher), a seminarian in the Master of Theology program at St. Vladimir’s, is a chaplain in the U.S. Navy Reserves. Father Kilian was the first monk to be tonsured to the monastic rank of “Lesser Schema” in the seminary’s Three Hierarchs Chapel in 2010 and was the first monk on campus to be inducted into the U.S. Naval Reserves as a chaplain. Father is also serving as the Acting Rector of St. Gregory of Palamas Church in Glen Gardner, NJ.