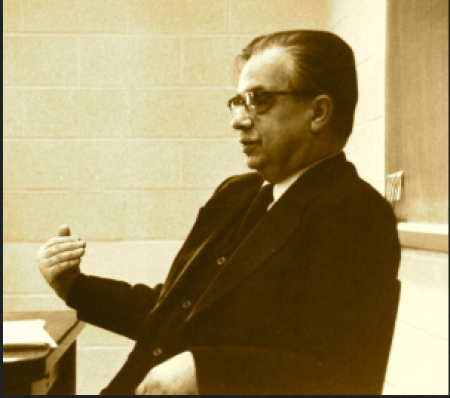 Today marks the 30th anniversary of the falling asleep in the Lord of Professor Serge S. Verhovskoy professor emeritus of Dogmatic Theology and Ethics, and Provost of St. Vladimir’s Orthodox Theological Seminary (SVOTS) from 1955 until his retirement in 1981.

He was born in Sarzha Russia in 1907. He left Russia with his parents and sisters in his early youth following the Bolshevik Revolution. He completed his secondary education in Prague, Czechoslovakia before moving to Paris, France. Greatly influenced by Fr. Georges Florovsky, while studying at St. Sergius Theological Institute between 1932–36, he became known for his passion for Orthodox Tradition, grounded in the Patristic Fathers and the Holy Scripture, and he was an open and vocal critic of the popular “Russian émigré intelligentsia,” to Paris. By the early 1950s he was recognized as an important theologian and writer, and was invited by Fr. Florovsky to join him in NYC in the forming of SVOTS.

Professor Verhovskoy always seemed to live “beneath the radar,” until it was necessary for someone to step forward to speak the Truth, which he always did without hesitation—an issue for which he continually chided his students: “You are called to be ‘Ezekiels,’ yet you are silent.” And when [seminary Dean] Fr. Alexander Schmemann expressly and adamantly responded to the “Sorrowful Epistle” of Metropolitan Philaret (Voznesensky), by stating, “I trust people like Prof. SS Verhovskoy,” he might well have duly cited him in his description of the role of the theologian:

The theologian has no rights, no power to govern and to administer that which belongs exclusively to the hierarchy. But it is his sacred duty to supply the hierarchy and, indeed, the whole Church with the pure teaching of the Church and to stand by that truth even when it is not considered “opportune.” It must be admitted that much too often our official “academic” theology has failed to accept this “obedience” and preferred quiet complacency. It has thus become accomplice to many deviations and distortions from which the whole Orthodox Church suffers today. But again, it was not so with the Fathers…they suffered from the various “power structures” of their days for their refusal to opt for the compromise or to accept silent obedience to evil. And the fact is that ultimately the Church followed them and not those who, then as today, have a thousand excellent reasons for avoiding the “abstract principles” and preferring the “demands of reality.”

And like many great men, he was a character. He loved the “Motown Sound” and he borrowed every one of my original blues albums—from Muddy Waters to Howlin’ Wolf – and he loved nothing more than to have a student drop by for tea and discussion, day or evening, or listen to us play guitars and sing “the rock music.”

When his beloved wife, Olga, died of sudden cardiac arrest while preparing to attend liturgy on St. Thomas Sunday, the word went out that “Prof” wanted students to be with him. Coming to his home on campus, [we saw] a large circle of chairs was arranged in his living room; students came and went, as a samovar served tea, and he taught “dogmatic theology”—life, marriage, death, the Last Things, the Resurrection—as he told stories, wept, and laughed, and we sang, and reminisced over the course of an amazing day.

At the end of his life, I had arranged for a very small favor in arranging for his care. He called my busy office, and he would not take “He cannot take your call now,” for an answer. And when my supervisor finally was forced to interrupt me, “Prof” simply said, “Well, my dear, I don’t know, but you are somehow an angel.”

“Me, Prof?” It was all I could do not to cry like a child. It was like the life affirmation you had always wanted, and the warmest hug you never expected! Memory eternal, beloved Professor, and may your soul rest with the saints!

Michael Stankovich is a Research Consultant in Behavioural Genetics and Forensic Psychiatry. He received his MD from the Faculté de Médecine, Pierre et Marie Curie – Sorbonne Universités, and his MSW from San Diego State University. He was employed by the UCSD School of Medicine, Department of Psychiatry, in contract with the California Department of Corrections & Rehabilitation, transitioning inmates with a mental health designation (including nearly 500 sex-offenders and child-sexual predators) into the Parole Out-Patient treatment system. He graduated from St. Vladimir’s in the Class of 1978.