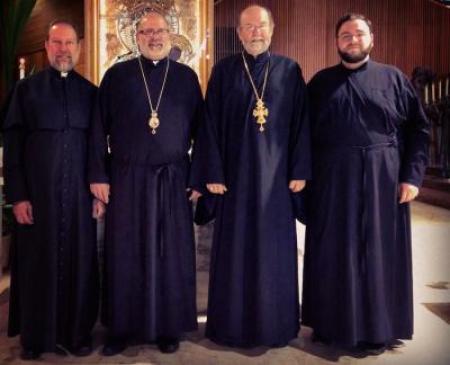 I was the house organist and music coordinator for the [2014 Western Rite Vicariate] Conference. I had the responsibility of organizing and leading the music for all of the services, including providing preludes and postludes. We had the organ works of Bach, Dupre, Vaughn Williams, Charpentier, Purcell, Byrd, and others. The services were sung using the traditional Gregorian modes.

We sat “in choir” and chanted the psalms antiphonally during the Daily Office, and experienced the waves of chant that it produces. This manner of prayer is so calming and centering that I often wish we did something similar in the Byzantine Rite.

We had Lauds, followed by Mass every morning and Vespers in the evening. We alternated the two rites used in the Vicariate: the St. Gregory (Roman Rite) and the St. Tikhon Rite (English Use). So some mornings we had Lauds, others we had Morning Prayer. Some evenings we had Vespers, and others we had Evensong. But all of our days were rooted in the celebration of the Mass. Our first full day was the Feast of the Transfiguration which we celebrated with a Solemn High Mass, with Bishop John Abdalah (SVOTS ’84)  presiding from the throne. The light and wonder of the feast certainly flowed through the entirety of the conference and made our time of fellowship and prayer that much richer. The conference had many wonderful speakers, including our own Fr. Chad Hatfield, who spoke on the ascetical tradition of the Church as a way of evangelism.

I was born and raised in the Antiochian Archdiocese, attending a Byzantine Rite parish. I fell in love with Byzantine Chant at an early age, and with my musical training as an organist I had a deep appreciation for the sacred music of the West. It wasn’t until college that I became acquainted with the Western Rite of our Archdiocese, under the tutelage of The Very. Rev. Edward Hughes (SVOTS ’80), who had been appointed Vicar General of the Western Rite Vicariate, in addition to serving as pastor of my home parish. I had always been interested in the liturgy and liturgical practice, so this was a great opportunity to put together my musical training and my love for the Liturgy.

My appointment as organist and choir director at St. Stephen Orthodox Church in Springfield, MA in 2009 provided another opportunity for study and entering more deeply into the liturgical life of the Western Rite. It was there that I learned to pray in a new way, one that encourages silence not just in one’s private prayers, but in the liturgy itself. It was very difficult at first, but over time I’ve grown to love and treasure the Western Rite.

Many people are confused as to why a “cradle” like me would be involved with the Western Rite, and I don’t really have an answer as to what drew me to it, but I have seen the Holy Spirit at work in these parishes, and I believe God has restored to the Orthodox Church a rite that is most important to our evangelism. It has been said that the Western Rite forces us to think about what being Orthodox really means, and helps us remember that it is faith in Jesus Christ and the teachings of his Church that unite us, not just the liturgy of St. John Chrysostom.

I can only encourage all Orthodox Christians to “come and see” and experience the Western Rite for themselves. It took me a while to get used to praying in a different way, so I’d encourage more than one visit. It is so different from our Byzantine Rite that it does take time to get used to and to enter into, but it is so very worth the effort.

In the first week of August, 2014, third-year seminarian Ian Abodeely attended the biennial, pan-Orthodox conference of the Western Rite Vicariate of the Antiochian Orthodox Christian Archdiocese of North America (AOCANA). The Vicariate oversees parishes and missions within the Archdiocese that worship according to traditional Western Christian liturgical forms. Ian recorded these reflections at the close of the conference.