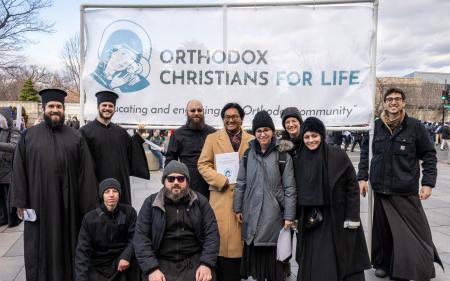 Hundreds of thousands made the trip to Washington DC this past Friday, January 20, for the annual March for Life, and 15 students and family members from St Vladimir’s Orthodox Theological Seminary (SVOTS) were among them. As in past years, the pilgrimage was organized by the St Ambrose Society, the seminary's pro-life student interest group, which seeks to raise awareness, educate, and promote action. The Society seeks to do this by hosting seminars and lectures on vital pro-life issues; they also host prayer vigils outside an abortion clinic year-round.

Dn Joseph Thornburg (M.Div. ‘23), President of the St Ambrose Society, expressed his gratitude for the opportunity to participate in the March for Life, saying, “It’s an honor to represent Orthodox Christians at this monumental event. I encourage all Orthodox Christians to come to this and other pro-life events and pray for the unborn and mothers in need. We must all come and stand in this culture of death, and bring Christ’s presence into it.”

Recently, the St Ambrose Society organized a presentation by Joan Farha, former SVOTS trustee, about her work at The Treehouse in Wichita, KS.

The Treehouse is a ministry which assists new mothers experiencing an unplanned pregnancy who have chosen to bear and keep their babies. It is the first social service agency sponsored by a local Orthodox community, which for The Treehouse, is St George Orthodox Christian Cathedral in Wichita. Joan has dedicated many years to service at the Treehouse, and spoke on all aspects of the ministry to the St Ambrose Society members.

For those who would seek to emulate the ministry done by The Treehouse, Joan had pointed and pragmatic advice. “If you want to get involved, identify the need in your community. The Treehouse filled a gap that existed in Wichita, we needed a place that provided care for new moms right after birth for the first two years,” she said. In getting the ministry started, it was very important to have the buy-in of the parish community. St George church members see The Treehouse as “their baby”; according to Joan, parishioners feel a sense of ownership and dedication that inspires consistent volunteering and giving, year after year. In terms of administrative organization, Joan emphasized the need to have a fully-fledged team in launching a successful ministry on a scale similar to The Treehouse. “You have to be prepared to recruit people with non-profit experience, people who have fundraising skills, who can run a board of directors, volunteer coordinators, a volunteer base, and a great executive director.”

St Ambrose Society members welcomed the opportunity to learn about practical ways to support mothers in choosing life for their babies, some expressing hopes to visit The Treehouse in the future to learn more about starting and managing a similar ministry.