Third Sunday of Great Lent: The Sunday of the Cross “Christ’s Outstretched Arms” 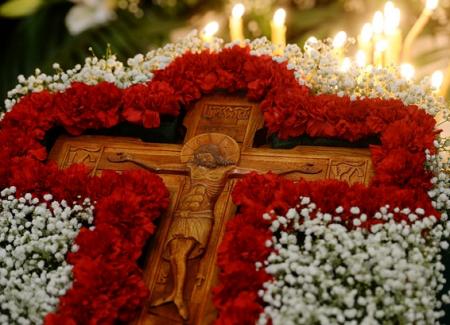 Our Alumnus, the Very Reverend Steven J. Belonick (M.Div. ’77), of blessed memory, was the rector of Holy Ghost Russian Orthodox Church in Bridgeport, CT. On the Sunday of Cross in 2017, he delivered this homily, reflecting upon the Cross as a symbol of both judgment and mercy.

Third Sunday of Great Lent: The Sunday of the Cross
“Christ’s Outstretched Arms”
By The Very Reverend Steven J. Belonick © 2017

Today, we have reached the midpoint of Great Lent in our journey to Pascha. I pray that you have not used this time in vain but have taken advantage of this opportunity to grow closer to God. At this midpoint the Church once again offers us the Cross of Christ to venerate and to reflect upon its place in our Christian life.

To help us in our reflection, I want to refer you back to a prescribed reading that was given to us this past week from the Book of Isaiah. I hope you took the time to read it (Isaiah 9.9–10.4). This reading describes the chaos that existed in Israel when the Prophet Isaiah lived. Let me describe some of it for you.

Pride and arrogance had filled the hearts of the people. They believed that they were wiser than God and refused to turn to the Him, even though danger was all around. Wickedness burned like a forest fire among them, and yet they remained unrepentant. Moral decay reigned unencumbered, and civil war was an ever-present reality. Enemies from the north were preparing to invade. Brother fought against brother, tribe against tribe. Describing these horrible circumstances that raged in his midst, Isaiah wrote these words: “For all this, God’s anger is not turned away, but his hand is stretched out still” (Isaiah 9.12, 17, 21; 10.4).  Four times within this passage Isaiah uses these same words as a kind of refrain.

This phrase indicates that despite all the destruction around them and God’s call to repentance, the Israelites chose to sink deeper and deeper into sin—even to the point of cannibalism, due to famine! And, so God continued to stretch out His hand. In other words, He continued to permit the cycle of destruction that was devastating their lives.

This haunting refrain, however, not only describes God’s anger at His people but also, at the very same time, His mercy. How so?

If you read the passage carefully, you will find that there is a fascinating sequence to the ever-worsening judgments and disasters permitted by God.[1] First, He throws down idolatrous Israel’s altars and shrines. Second, He cuts Judah and Israel to pieces. Third, He fuels a fire, and, fourth, He gives them over to cannibalism. A modern commentator on this passage, Peter J. Leithart, states: “Israel is being sacrificed: Dismembered, burned, eaten. Yahweh’s response to Israel’s injustice is to sacrifice Israel.”

Leithart goes on to explain that this passage prophesies the death of Jesus. Jesus is the Child of God, the Lamb of God, who is cut, bruised, sacrificed on the wood of the Cross, and then given to us as food. In His crucified body, Jesus takes upon Himself Israel’s sin; He is sacrificed instead of them, and He thus delivers Israel from their sin and punishment. “Yahweh’s justice triumphs over Israel’s injustice,” says Leithart, “when the child is cut, when He is placed on the altar of the world, when He is given over to food, when He becomes sacrificial Israel to deliver sacrificed Israel.”

“For all this God’s anger is not turned away, but his hand is stretched out still.” What a powerful message, for it tells us that God permitted punishment and destruction while at the same time promising overwhelming mercy.

And, what a lesson for us today! God was angry because the Israelites had turned away from Him, and likewise, His anger burns towards us when we sin. We must not deny this reality.

And yet, as He stretches out His hand—permitting us to suffer the consequences of our own sins—He has a merciful plan in mind. His plan is for us to return to our senses, after we find ourselves in squalor, in danger, and in a cycle of self-destruction due to our leaving His embrace, due to our disregarding His commandments.

The Cross that we venerate today, like Isaiah’s prophecy, perfectly illustrates God’s judgement and mercy. (For the judgment and mercy of God are always inextricably intertwined!)

Scripture confirms this. After Jesus raised Lazarus from the dead, He knew that His arrest and death were imminent. His hour had come. He became reflective and began to speak about His death openly. He said to his disciples: “Now is my soul troubled. And what shall I say? Father, save me from this hour? No, for this purpose I have come to this hour” (John 12.27). Then He said: “Now is the judgment of this world, now shall the ruler of this world be cast out; and I, when I am lifted up from the earth, will draw all men to myself” (John 12.31–32).

So, the Cross is a judgment on us because it shows to what extent we human beings will go to reject God, to take His care and authority in vain, and to direct our allegiance elsewhere, apart from Him. But the Cross is also a source of mercy. On the Cross God’s Son still “stretches out His hands toward us,” but this time in a different way. Nailed to the tree with arms outstretched, He forgives us, He invites us, and He welcomes us. The hands of our Lord are stretched out now for us to come to Him.

At this midpoint of Lent we begin to feel the effects of fasting, and we begin to feel the temptation to weaken our resolve to complete the course of the fast. But just like a military leader shows the colors of the flag when he sees his troops growing weary, so the Church raises the Cross of our Savior to inspire us.

May the sign of the Cross motivate us to keep going, to finish the race, to be conquerors of our passions, to complete the course of the fast, and to celebrate the Feast of Feasts, our Lord’s Resurrection. As our Lord stretches out His hands to us this day, may we in turn reciprocate by stretching out our hands to grasp His. AMEN.