The turning point of time 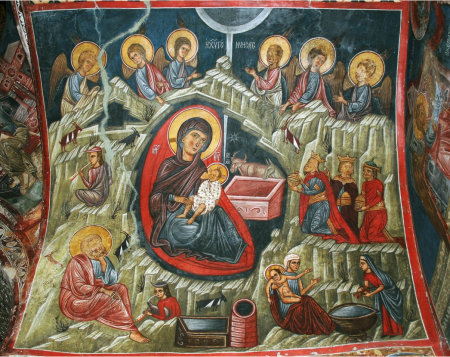 Today, at this feast, we stand at the turning point of time.

Not simply another turning point, as the world spins on its axis, or rotates around the sun, but the turning point of time itself; the moment from which we measure all time. And more: it is a turning point in the heavens themselves, opening towards us on earth, so that we can hear the angels singing the praise of God, if we have the ears to hear them, not our usual physical sense of sound, which at this time of year is bombarded by all sorts of noise, some of it claiming to be religious – but usually the religion of consumption; but with a purified hearing.

It is a turning point at which strange things happen.

According to an old tale, told by another story teller, in the night between Christmas Eve and the morning of Christmas day, all the animals can speak, though few hear them or know what they say; Simpkin, the cat, as he wanders through the streets looking for mice to eat, can hear them chattering away and singing; but he was not admitted into their conversation; for he had hidden some twist and was prowling for mice to eat, as his master lay sick in bed, muttering to himself: no more twist.

That nature is overturned on this night is indeed an old idea. In the second century prayer for midnight, we hear:

In this hour every creature hushes for a brief moment to praise the Lord; stars and plants and water stand still at that instant; all the hosts of angels ministering to Him, together with the souls of the righteous, praise God.

And from the same period, we hear, in the Protoevangelium of James, how Mary and Joseph also stop, when Mary feels the stirrings of the babe in her womb ready to be born. They find a cave and Joseph goes off to find a midwife:

But I, Joseph, was walking and I was not walking. I looked up to the vault of the sky, and I saw it standing still, and into the air, and I saw that it was greatly disturbed, and the birds of the sky were at rest. …
Everyone was looking up. I saw a flock of sheep being herded, but they were standing still … I looked down at the torrential stream, and I saw some goats whose mouths were over the water, but they were not drinking. Then suddenly everything returned to its normal course.

As Christ is born, creation stands still—strange things happen and nature is overturned, the heavens themselves are turned, and we can, if we listen, hear the angels praising (and the mice singing).

It is in this midnight silence, Wisdom says, that the firstborn Egyptians were slain by the destroying angel, so that the firstborn of God, Israel, might be set free from slavery, when the Word descended from heaven. While peaceful silence enveloped all things, and night was in the middle of its own swift course, from heaven, from the royal throne, your all-powerful Word, leapt as a stern warrior, into the midst of the land marked for destruction, bearing your irrevocable command as a sharp rapier; standing, it filled all things with death and while it touched heaven, it stood on the earth.

This act, in silence, is what we celebrate today, as we too are set free from slavery, when the firstborn Son of God, Christ himself, is born from the Virgin, uniting heaven and earth, and we, in the midst of the death he casts upon the earth, are brought back to life.

Three mysteries of God, St Ignatius says, were worked in silence: the virginity of Mary, the birth of Christ, and the Cross. They were shrouded in silence, hidden from this world and its rulers, so that, when creation is silent, God can work, for Christ is the Word emerging from this silence. And it is this silence that St Ignatius asks of the Roman Christians, so that he too might follow Christ in his Passion, and so become a word of God, as did all those martyrs we celebrated in the days leading up to this birth of Christ; for as St Ignatius also says, Christ, the head, is not born without his body also being born.

It is this silence, then, that we need, if we are going to hear the angelic ranks singing in amazement today, and to join in their hymns of praise. This is something we will never hear, or be part of, if we remain on the prowl, as was Simpkin, looking to fill our stomachs by eating others, all the while keeping for ourselves what others need. Only when he repented, and brought to his master that which he had held back, only then was the magnificent garment that the mice had been working on only then was it able to be completed.

Christ’s body, miraculously woven in the womb of the Virgin, as she spins the thread, the twist, is today present on earth. That it weaves together heaven and earth is possible only because the heavens themselves are opened when they turn today, and when they are opened we can see the end to which the whole of creation (animals as well) are working.

Let us not say, then, that we have no more twist, nothing to contribute to the weaving of the glorious body of Christ, but instead give glory, thanksgiving, and praise for all that God has done for us today, giving of ourselves, giving our very selves, in return for truly today, Christ is born!

Fr. John Behr (SVOTS ’97) is the former Dean of St Vladimir’s Seminary and Professor of Patristics.