Unity in Diversity: The Opportunities and the Challenges 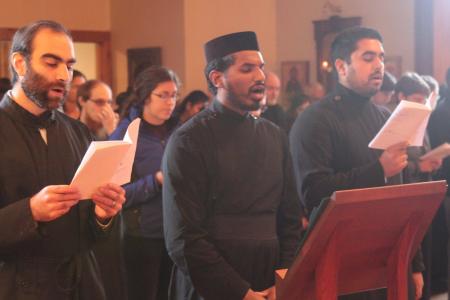 “Unity in Diversity.” This expression speaks about a balance between wholeness and difference, between integrity and variety. The idea is sometimes rooted in our teaching about the Holy Trinity: God is a unity, one God, in a diversity of persons, Father Son and Holy Spirit. Unity in diversity can also suggest something very important to us, as human beings, but specifically as Orthodox Christians. Because it can illustrate that things or people don’t have to look, walk, talk, and think exactly alike in order to be in union with each other.

Not all differences can be held together. Some differences between us really do divide us. Thinking about Orthodoxy, if someone were to say that Jesus Christ is not divine, or that he’s not human, that person would be at odds with the Orthodox Christian faith, and therefore divided from it. But not all differences divide. In fact, some differences make for an even deeper unity.

This sounds surprising, but anyone in a reasonably healthy marriage knows this instinctively: two people don’t have to become identical to each other in order to be in union with each other. In fact, it is often precisely the differences that make their union not only more interesting, but also more real, more substantial. We don’t, as a rule, marry mirror-images of ourselves.

Unity and diversity play themselves out within any human society, grouping, or family. And they have long been applied to the unity and diversity that characterize the Church. St Paul gives us the image of the Church as a body, with members that are different and interdependent (see especially 1 Cor. 12). From its apostolic beginnings, then, the Church has always been thought of as a community of diverse members with diverse gifts, and the diversity of the saints continues to testify to how differently the same Christian faith and life may be expressed in this world.

The Church’s diversity-in-unity was also articulated in a striking way in the second century. In the midst of a heated crisis in the Church concerning the date on which Easter should be celebrated, St Irenaeus of Lyons considered the various practices and dates and said: “The difference in practice confirms the unity in faith.” Yes, you read that correctly. The differences confirm the unity. They testify to it. They strengthen it. This pronouncement challenges our logic: wouldn’t you have thought that it’s unity in practice that confirms unity in faith? Well that can happen too. But what is being said here is also true, and deeply important: the very fact that we can embody diversity, yet agree in the matters of the greatest significance, confirms and deepens our unity. It means that our unity doesn’t depend on our being identical, or completely undifferentiated. In short, unity is not uniformity.

St Irenaeus’s saying confirms the principle of “unity in diversity,” or perhaps “diversity in unity.” Unity in the most important sense, unity concerning the things that really matter, is not threatened but enriched by diversity. Fr St Irenaeus, the different dates of the Paschal celebration did not threaten but even enriched what really mattered, namely the fact and the life-giving content of the Lord’s Pascha itself.

But with all its enriching potential, the interplay of unity and diversity also poses two serious challenges:

Both of these challenges require us to identify what is the unchangeable core of our faith and life, those things that cannot be denied or distorted without the loss of our unity. Having identified that core, it becomes possible to identify both the possibilities and the limits of diversity. For example, we can be on different calendars and be one Church. We can hold different teachings about “toll houses” and be one Church. We can  even believe different things about how and when the world came into being (7,000 years ago, or 14 billion) and be in one Church.

But we cannot be one Church if some of us are saying that Jesus was “merely a very great man,” or that “Jesus was divine, but only appeared to be human.” It would also be hard to imagine being in the same Orthodox Church if some of us were to teach that “human personhood only begins at birth, and that therefore abortion is only the loss of a mass of cells.” These would be genuine divisions of teaching or practice, not just “a healthy diversity of expression.”

The examples I just gave are pretty obvious. But in fact, unity and diversity pose deep challenges to the Orthodox Church today, specifically in North America. We seek to be one. We seek to express our common Orthodox identity in a way that both recognizes and transcends our ethnic histories and identities. We desperately seek a unity that has, up until now, proved too challenging to be realized.

We are of course deeply concerned to be Orthodox. Sometimes we show that concern only by repeating all the formulas perfectly, getting every element of the liturgy, its vestments, architecture, and singing perfect. Nothing wrong with a loving effort to get these things right. The problem lies when we think that the substance of Orthodox faith and life resides entirely in them. If that’s what we think, whether consciously or not, then there becomes only one right way of praising God, one right Ochtoekos, one right set of vestments and hats. And one calendar on which the whole edifice is properly based. To think this way would not only be a great loss to the life of the Church, it wouldn’t be Orthodox.

St Irenaeus’s statement about, differences confirming unity, had to do with calendar issues. Can’t we go further? Aren’t there are other issues on which it is possible to do and teach things differently, provided we hold to the key elements of the apostolic faith? It is our responsibility to identify the diversities that can be held together in the unity of the Church.

One of the most significant and genuinely challenging cases in point is the relationship between the Orthodox Church and the “Oriental” Orthodox churches – the Coptic, Armenian, Syrian, Ethiopian, Eritrean, and Indian-Syrian Churches. In recent decades an official, Church-delegated dialogue process has affirmed that “both families have always loyally maintained the same authentic Orthodox Christological faith, and the unbroken continuity of the apostolic tradition.”[1] The first thing to do would be to test whether we agree with that statement. Because if we do, in other words, if the real theological unity has not been compromised by the historical terminological diversity of these church families, then we have a serious challenge before us: the challenge to live out the unity that we have identified, and admit within the life of One Church a greater diversity of liturgies, theological formulas, and saints.

Can we, Eastern and Oriental churches, together, conceivably embody a unity in diversity, a diversity in unity? It would require many of us to rethink what “Orthodoxy” looks like. We would have to ask what is currently keeping us apart: are there still genuinely church-dividing theological issues? To what extent are we in fact living in the mere habit of separation, learned from centuries out of communion? Are there liturgical, ministerial issues yet to be resolved? Is part of what is keeping us apart simply the fear of a greater diversity—not in matters of apostolic faith and practice, but in language and “culture?” I do not wish to prejudge the answers to these questions. But we owe ourselves, each other, and our God, the most thorough, responsible, prayerful consideration of such things.  Christian love for the other, and Christian pursuit of truth wherever it is to be found, impel us to do no less.

I think then that the one great goal of all who are really and truly serving the Lord ought to be to bring back to union the churches who have at different times and in different ways divided from one another.

Dr. Peter C. Bouteneff is Professor Systematic Theology at St. Vladimir’s Orthodox Theological Seminary. He has broad interests in theology ancient and modern, but as a great fan of music and cinema he is also committed to exploring the connections between theology and popular culture, regularly offering a course on religious themes in film (one of his current courses this fall is “Religious Themes in Film”). Prof. Bouteneff co-directs the Arvo Pärt Project at St. Vladimir’s Seminary, an in-depth endeavor involving concerts, lectures, and publications. His most recent book is Arvo Pärt: Out of Silence, that has been hailed as “a triumph,” “a game-changer for Pärt scholarship,” and “a must-read for any listener or performer of Pärt’s music.”