Acquiring Tools to Respond to the World: An Interview with Fr. Elias Dorham 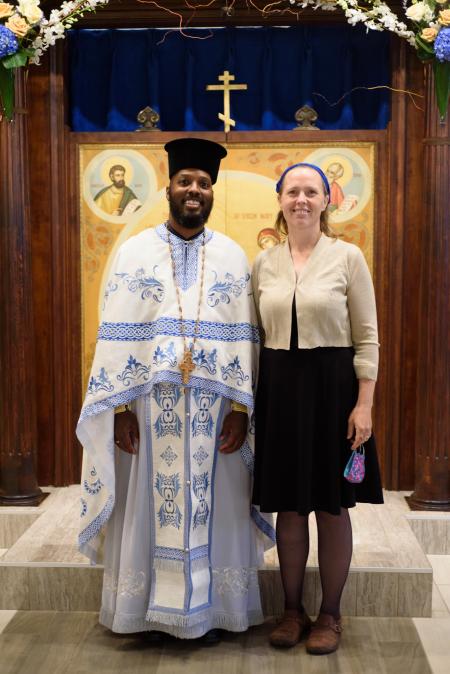 Fr. Elias Dorham serves as the Associate Priest at Holy Transfiguration parish in McLean, VA. He and Presvytera Sylvia have been married for twenty-seven years and have ten children and two grandchildren. His professional experience includes active duty military service, federal service, and private sector cybersecurity. He holds a B.S. in Political Science from the United States Naval Academy, an M.S. in Information Systems Technology from the Naval Postgraduate School, and an M.A. in Theological Studies from Christendom College Graduate School of Theology. He is currently a Doctor of Ministry (D.Min.) candidate at St. Vladimir’s Orthodox Theological Seminary.

Tell us a little about your background, Father.

I could not have designed my life’s path myself and yet I see God’s hand in all of it!

I was born and raised in San Francisco; my mom was 16, and I was brought up by my grandparents and also enjoyed a warm relationship with my mom. My happiest childhood memories center on the time when there were four generations of our family living in a single city block.

I wasn’t raised in any kind of a religious context. In college at the U.S. Naval Academy, I began to feel that something was missing in my life. Ironically I ended up finding (rather than losing!) my faith in college, and was baptized as a Roman Catholic there.

At some point after this, I discovered those Eastern churches that were in communion with Rome and began attending Eastern liturgies; my wife and I continued in this practice for a while after our marriage, even driving an hour each way with several children to attend. We came to love the liturgy of St. John Chrysostom and the way the Eastern churches worship! However, due to the distances involved, we eventually went back to attending the Roman Catholic Church for a time, due to practical reasons.

After I left the Navy in the late 2000s, I began to deeply sense the call to ministry, and also began to feel less comfortable worshiping in the [Roman] Catholic Mass. I began to study theology at the master’s level and during this chapter ended up at a Melkite Church. Fortunately for me, while some of the Eastern Catholic bishops are reluctant to ordain married men, our bishop was very committed to making this happen, so this fall I was ordained to the Holy Priesthood and am attached as the associate priest in a vibrant parish, Holy Transfiguration Greek Melkite Catholic Church in McLean, Virginia.

How did you end up at St. Vladimir’s?

I’ve been very moved by the St. Vladimir’s experience—it’s an incredible blessing to be a part of this community. In fact, this is why I’ve actually become a donor to St. Vladimir’s. I identify with the SVOTS vision and it is a vision that has benefitted me tremendously.

Father Sergius Halvorsen, D.Min. [director of the D.Min. program], was very cordial and helpful in the process of my application and acceptance. Coming to pastoral ministry later in life, I realized that on the one hand, I did bring some applicable professional skills from military life—organizational skills and principles, and an understanding how to work with people. I had some of the soft skills that you need in order to work with people. Yet I also recognized that the world we’re living in now is very different than the world we were living in even twenty years ago, and I felt I needed additional tools to be more effective in ministry.

What’s a Christian to do in such a contentious culture?

A lot of the strife we’re seeing in the United States is tied up with the outworking of Western culture. The Eastern churches are not well known and when most people think of Christianity they think of the Latin Rite Catholic or Protestant traditions. Christianity is misunderstood because it’s too tied to the Western framework. So when people reject Western culture they reject the Christian faith too. Yet when we’re able to get people to listen to us, they begin to think that perhaps what they think is Christianity is really a misconception; that perhaps what they think they know, they don’t know. What is being recorded as a loss of religiosity might more accurately be assessed as people stepping away from more traditional, Western formulations of faith.

We can engage seekers in conversation, hear them out, and look for places of commonality, and find the bridges that can be crossed. People often still believe in a higher being, even when they don’t realize that they do—you learn this when you begin to probe a little deeper, asking them, “What do you think and believe personally about God?”

Some of the atheism in our culture is a social veneer in this new emergent “woke” environment. The D.Min. program really equipped us to lean into uncomfortable conversations, to realize that if our faith is true, then we do have the tools and resources to encounter people who say “I’m not very religious.” Well, ok, but then let’s have conversations about other things! Let’s find out where we can find common ground as human beings and then let’s have religious conversations without using religious words.

We need to realize that there are some deeply held American values that are a part of “who we are as Americans,” so to speak, that are contrary to the Gospel of Jesus Christ. We have to stop identifying our faith with our citizenship. The early Christians were good citizens as part of their faith, rendering unto Caesar the things which were Caesar’s and to God the things which were God’s. They didn’t confuse the two. We’ve forgotten what belongs to God. If there’s anything left over after Caesar or ourselves, only then do we render unto God.

What was your experience like with the Seminary’s D.Min. program?

The onsite classes really make the program so rich, and at the onsite closed-door sessions we often asked, “How do we practically apply all these concepts in our pastoral work? In this place and time, how do we take this patristic wisdom and apply it?”

We learned that we might have to think differently about uncomfortable situations. Sometimes our theological constructs just don’t map directly to the situation on the ground! Our pastoral realities are rarely neat and simple. Life is messy, and so to be able to sit in a room with other clergy coming from different backgrounds and contexts, and talk openly about things that are troubling all of us and then exploring pastoral solutions, was a rich and formative experience.

Last November we were on campus (pre-COVID) and the trustees asked us to come and address them. One trustee asked me if the D.Min. had equipped me for ministry. My answer referred him to something very close to home. Like many of us, I have several adult children. Some of them are walking the path of the culture right now rather than the path of faith, but I can have conversations with my adult children and bridge distances that I would not have been able to bridge a few years ago.

In Fr. John’s class we read books by modern secular people; now I understand “the other” in a way I wouldn’t have prior to the D.Min. Reading these books I would think, “Oh! I’ve heard this very thing come out of the mouth of a certain adult family member I know. That’s where it came from! How fascinating!” In the D.Min. we were reading books and articles both by Christians and by atheists in parallel, and thus we developed a context for modern objections to the Faith. We learned there are readily accessible answers for those who are truly seeking God. But we don’t take this information and bludgeon someone over the head with it. Instead, we work to internalize the information and when the objections come up, we can say, “That’s interesting, I can see where you’re coming from…but have you ever thought about this, or that?”

How is the program structured?

It’s very focused and intense: eight weeks of academics offsite, two classes at a time. The ninth week is reading week, and then the tenth week is an onsite intensive week that runs twelve hours a day as we discuss, critique, present, and defend our courses of study. The capstone of the academic term is when we present to the cohort the topic of our next paper and get and give feedback. Time and again the pastoral approach is applied and emphasized.

It’s an interesting cycle; the D.Min. starts with an orientation term in which you are getting familiar with the program and instructors. By the end of the first term the cohort has interacted directly with each other on multiple occasions and a sense of kinship develops. In my cohort, we came from the Greek Catholic, Greek Orthodox, OCA, Methodist, and Eritrean Orthodox traditions—all standing on common ground. You don’t often find this outside the context of St. Vladimir’s Seminary.

I would recommend the program 100%. To wrestle with the culture we find ourselves in today, a good number of clergy and laypeople really need to have advanced education in these areas. Our jurisdictions would do well to be putting people through programs like this on a regular basis. Building a cadre of ministers lay and clergy who are properly equipped to advance the mission of the world in the Church today is essential.

Tell us about your final D.Min. project.

The project is meant to shape the focus of the D.Min. candidate’s ministry. You chose a topic directly applicable to your work. I’m planning to research the dynamics of the first five to ten years of marriage. How do you take the experience of conflict in marriage, especially in those early years, and look at that from the perspective of marriage as a path towards holiness and an opportunity for growth? I work with a number of younger couples in my ministry and I can see that Christian marriages desperately need a better approach. We have a high divorce rate partly because we are failing to give couples the tools they need early on. Eastern Christians see the spiritual life as healing and wholeness. In other words: “I’m responding out of my own brokenness, and you’re responding out of your own brokenness; how can we heal together?”