“Beacon of Faith, Proclaimer of Truth”: A Former Trustee on the Mission of St Vladimir’s Seminary 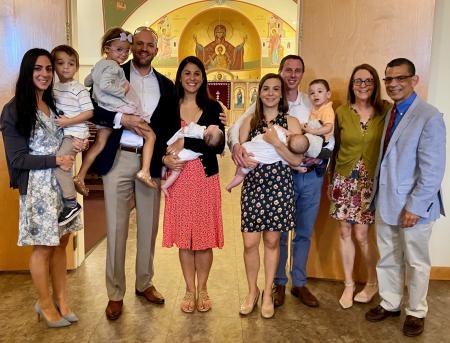 Former Trustee Dr. Nicholas Pandelidis served on the Seminary’s Board for fifteen years, stepping down in 2020. A dedicated Seminary donor since 1997, Dr. Nick, an Orthopedic Surgeon, describes himself as a “semi-retired” physician who is now investing even more time and treasure to the causes he cares about deeply. He and his wife Lisa have three married daughters—Katy, Thea, and Allie—and five grandchildren (including his namesake, Nicholas) with another grandchild due in June.

Dr. Nick, how did you first learn about St. Vladimir’s Seminary?

It started with a book: I read Fr. Schmemann’s Great Lent. It was an epiphany for me. I refer to myself as a convert from cradle Orthodoxy. You can be Orthodox your whole life and not know much about it when you’re born into it. When Lisa was learning about and converting to the Orthodox faith and we were approaching marriage, I thought I should learn more about Orthodoxy, and one of the books that I read was Great Lent. I learned so much about the structure and development of Lent, but was also struck by Fr. Schmemann’s appendix entry, “Secularism.” Father Alexander’s description of the religiosity of the US and of modern society as being separated from the totality of life in the world was illuminating.

I thought any place that can produce a book like this is okay by me, so I became a regular contributor.

At some point, the Seminary was looking to recruit board members; I was invited to —and participated in—an “Immersion” program.  Subsequently, I was asked to serve on the Board and did so for fifteen years.

Fifteen years as a trustee—tell us about that.

It was exciting for me to get to campus and talk to the people still around who had known Fr. Alexander personally, many of whom he had talked about in his books.

I was very impressed and awed by the depth of knowledge and wisdom on the St. Vladimir’s Board, as well as how pan-Orthodox it was. Worshipping at Three Hierarchs Chapel was so moving; seeing the young families and all their children. To me, the Seminary was and is a beacon of Orthodox Christianity in the midst of secular America. That’s been my attraction to St. Vladimir’s from the beginning.

A big struggle as a trustee is working to keep the doors open. Maintaining sustainable and even viable finances is always a challenge.

To backtrack a bit, your family history is so fascinating, spanning multiple countries and states! Can you share a snapshot with us?

I grew up in York, Pennsylvania.

My Dad’s family was from (Greek) Asia Minor and my Mom’s family was from the mainland of Greece. Dad (Panteleimon) was born in Greece where he went to medical school. He navigated the very complicated admissions process to the University of Athens Medical School—there are 150 slots. Several hundred people take the admission test and the top 150 are admitted! He and about half his classmates came to the United States because America was the land of opportunity.

Dad did his initial post-doctorate medical training in New Orleans. He went to New Orleans because he was told people spoke French there and his French was better than his English!

My Mom (Angela) was born in York, PA of Greek parents. I’m not clear on how my Mom who lived in York was introduced to my father in New Orleans, but I know it involved my Dad driving from New Orleans to York. Soon thereafter they were married.

My parents moved to Boston, where me, and then my sister Joyce, were both born, for the next stage of Dad’s training.  After two years, our family relocated to Philadelphia where Dad did an additional year of psychiatric fellowship. We moved to York in 1963 and I have been here ever since.

Growing up, we attended the Annunciation Greek Orthodox Church. My paternal Pappou (grandfather) was a founder of Annunciation. He had come to the US in the early 1900s. My Dad also became very involved both in the leadership of the church and as psalti and choir director.

My Dad practiced psychiatry in York for forty years. My Mom was a graduate of the Temple School of Pharmacy. So I was oriented to going into medicine; it was my dad’s hope. Both my brother Steven and I are surgeons. My Dad died six years ago, but he would be pleased to know that, to date, four of his thirteen grandchildren are physicians.

I went to Penn State (Hershey) for medical school and then did a residency in orthopedics, followed by fellowship training in spine at the University of Rochester in New York. I began operative spine orthopedics in 1992 and recently mostly retired. I am seeing office patients and doing some independent medical legal work. This is my version of “retirement”; at age sixty-three, I’m not ready to stop working but am happy to not be working as hard and as hectically as I did for nearly thirty-six years.

I met my wife Lisa at college. She was at Bryn Mawr and I attended Haverford College. Lisa and I have three married daughters—Katy, Thea, and Allie—and five grandchildren (including one Nicholas) with another due in June.

We have attended St. John Chrysostom (Antiochian) Orthodox Church in York for a number of years. I still occasionally attend Annunciation, my home parish; I had a tradition of chanting Salutations with my Dad in Lent so I still go back for Salutations. It’s a nice remembrance for me.

From the past to the future…the Seminary is moving into a new era. Could you share your thoughts as a former trustee about the decision to relocate?

I’ve always seen St. Vladimir’s as not so much simply  “Orthodox education,” but more broadly, as “Christian mission and Christian apology.” The many problems of our society here and abroad result from a false understanding of the world. We are suffering more because of a loss of the Christian perspective and understanding of reality. St. Vladimir’s—with its Press, its training of priests, and the life it lives on campus—has always been a proclaimer of the Truth. Saint Vladimir’s ability to do so has been limited by financial constraints, yet despite this constraint, the Seminary has earned a worldwide reputation as a premier center of Orthodox education.

With the relocation project, St. Vladimir’s is building on its longstanding foundation of excellence in Orthodox education and also apologetic and theological explication, to take this good work to the next level with a larger campus in a new location. While New York is very accessible it’s also very expensive and there isn’t the ability to expand the campus. With all the outreach to various ethnic groups in the Orthodox world, to have an American center for Orthodoxy that’s pan-Orthodox, with a global perspective and attraction, will allow St. Vladimir’s to increase its impact and ministry. Saint Vladimir’s is not simply about education for the Orthodox; it is mission and apologetics for all. That’s what the world needs now more than ever.

Now that you’re a retired trustee and a “semi-retired” physician, what’s next?

I’m very concerned that in my lifetime the standards of right and wrong have mostly been abandoned in our society. People have always been fallible and sinful; we want to do what we want to do. But for most of our country’s history there was a standard of right and wrong based on a Judeo-Christian worldview, and that standard was considered objective and absolute. People violated it all the time, but they recognized when they did so that they were violating a standard that was good and true.

Moral standards now are thought to be relative. But the moment you don’t have an objective standard you lose the ability to argue that something is good or bad. If you don’t have a firm foundation in truth, bad things happen—it’s that simple. Thus we have: family collapse in the West across all socio-economic groups, high rates of addiction, crazy things going on with sex and gender, and the loss of understanding of responsibility to others and responsibility to God.

We not only need well-trained priests who can talk to the parents and children within the Orthodox community, but we also need to reach the suffering world with the truth that God loves us and that we ought to behave a certain way because this is aligned with our created nature.  When you abandon the standard, it’s shocking to see how far and quickly society deteriorates and collapses.

Having mostly retired and had more time, I wanted to get involved in work to recover our society’s Judeo-Christian roots.  That has led me to advocacy for parental choice in schools. You can’t fight these cultural issues at the periphery; you have to go to the roots. That begins with public education. When I was growing up there was an understanding of virtue, respect for authority, that there was right and wrong, responsibility for self, family, and community. Public education, while not overtly religious, had an unstated foundation in Judeo-Christian worldview. This is no longer the case.

So the opportunity and time for parents to be given school choice is ripe. With the controversies over curriculum and COVID, rather than fighting and rancor at school board meetings, wouldn’t “educational freedom, not fighting” be better? Allow parents to pick the school that best fits their family’s needs and their kids’ aptitudes and challenges.

My strong conviction is that our times demand contemporary apologetics that can address and bring healing to our societal sickness. The Orthodox hierarchs, clergy, and laity must not waiver from the truth. We must have the faithfulness and courage to address this modern relativism. Saint Vladimir’s has always steadfastly witnessed to the Truth. I believe the Seminary will be at the forefront of this work in the years to come, God willing, as a financially sound, bigger, broader, global, and—yes—relocated institution.

To become a monthly or one-time donor of St. Vladimir's Seminary, visit our Giving Page.