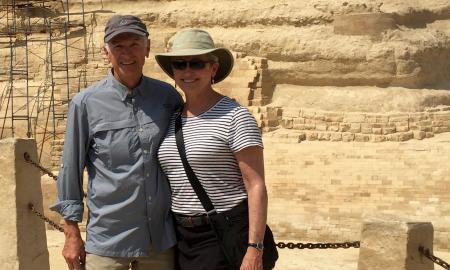 During his tenure as a trustee, Glenn began to understand the foundational role of planned giving in enabling the ministry of the Seminary. “In my twenty-plus years as a trustee, I learned to give at all levels in order to actively participate in supporting the Seminary,” he notes. “Years ago I decided to purchase a life insurance policy that will benefit St. Vladimir’s after I repose.

“That final gift that you give is so important. At the end of our lives, nearly everyone has something to give, whether we’re wealthy or not,” he explains. “If we plan ahead of time to give part of our estate to St. Vladimir’s, it can be an amazing way to leave a lasting legacy. We shouldn't let our fears keep us from making these commitments. What better way is there for people of either modest means or wealth to make a significant gift that will help to bring up new leaders for the Church, than by giving at the end of our lives?"

Dr. Kubina says he also owes his commitment to “giving forward” to the incredible tenure of SVOTS’ Senior Advisor for Advancement Ted Bazil, who manages the Seminary’s Planned Giving program.

“It’s very unusual for a school to enjoy the kind of institutional stability that St. Vladimir’s has experienced, thanks to the commitment of Ted Bazil, who has served in one capacity or another for over fifty years and now manages the Planned Gift program.”

What has motivated a busy Orthodox Christian doctor with many bids for his time to sustain this level of commitment to St. Vladimir’s over four decades? Glenn explains, “The Seminary has had such a seminal influence on the Orthodox Church—certainly in America, but even throughout the world. Every well-trained priest touches the lives of countless parishioners from childhood on up. Helping to educate these priests became very important to me from early in my journey as an Orthodox Christian, because I could see the impact they have on the entire Church.

“The giants in theology have always been at St. Vladimir’s,” he continues. “Every year on that Yonkers campus are young people who would be successful at anything they wanted to do; instead, they are making this huge sacrifice to be a priest, a priest’s wife, a priest’s children. Who is going to pay for them?

“To put it in business terms,” adds Glenn, “the Seminary is turning out a high quality ‘product.’ Yet that ‘product’ isn’t for the benefit of the institution but for the whole Church. Somebody has to pay for the priests, educators, choir directors, and youth leaders who graduate from St. Vladimir’s year after year. That job belongs to us.”

Dr. Glenn Kubina is a board-certified otolaryngologist who has practiced medicine at Mid-Kansas Ear, Nose & Throat Associates in Wichita, Kansas for forty years. An Orthodox Christian who converted from Roman Catholicism forty years ago, Glenn served as a St. Vladimir’s Trustee for over two decades. He credits the Seminary for helping him in his spiritual journey through the books of SVS Press and the priests and hierarchs who are SVOTS alumni. He attends St. George Antiochian Orthodox Cathedral in Wichita, the diocesan home of His Grace Bishop Basil (SVOTS Class of 1973). He and his wife Nancy are the proud parents and grandparents of five children and twelve grandchildren.