Euchologion is ‘unveiled’ in new book 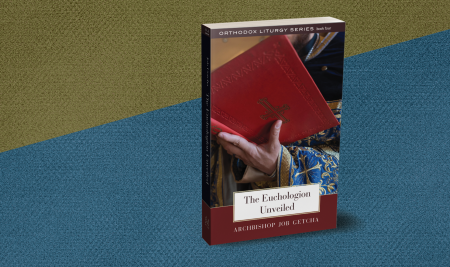 Archbishop Job Getcha “unveils” the history, meaning, and structure of the mysteries, or sacraments, of the Orthodox Church in The Euchologion Unveiled, a new book from St. Vladimir’s Seminary (SVS) Press.

The Euchologion is the liturgical book priests use to serve the sacramental services of the Church. Though most people have heard of “the seven sacraments” —baptism, chrismation, the Eucharist, confession, marriage, ordination, and unction—this is a later western schema[1], and the Orthodox Church performs several other sacramental rites, which are also explained in The Euchologion Unveiled: monastic tonsure, the funeral, the sanctification of chrism, the consecration of a church, and the blessing of water.

This is a companion volume to The Typikon Decoded, and the second volume of An Explanation of Byzantine Liturgical Practice.

[1] The Orthodox Church does not traditionally limit “sacraments” to seven or any other particular number, as she considers everything which is in and of the Church as sacramental or mystical.