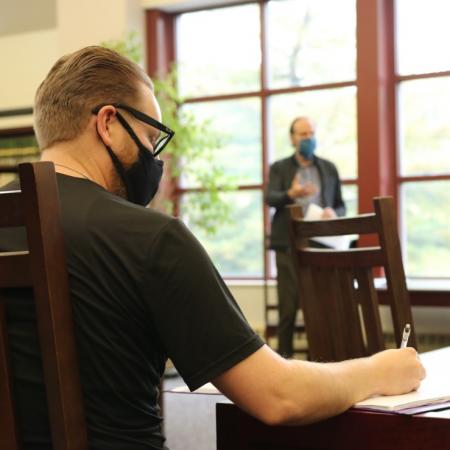 On Wednesday, seminarians at St. Vladimir’s tapped into the writing expertise of Professor Peter C. Bouteneff  as the “The Lyceum” hosted a writing workshop.

Danielle Earl, librarian at the Seminary’s Father Georges Florovsky Library, started “The Lyceum” as a sort of “marketplace of ideas” at the Library, where students can discuss academic research with other seminarians and faculty members.

Dr. Bouteneff began his introduction to the group by describing how writers should approach their work “pastorally.”

“A good pastor and a good Christian is one who knows his or her audience and has 'heard' the audience, and therefore is speaking to questions the audience actually has, rather than simply spouting forth information only the writer is interested in,” he explained.

Another writing workshop catered to second- and third-year seminarians are planned for the spring semester.

The writing workshop and the activities of “The Lyceum” are part of continued efforts to build up the Library as an even greater academic resource for seminarians as well as outside scholars.