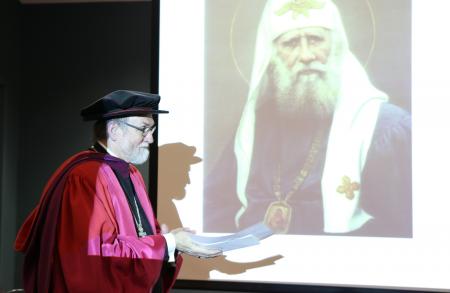 Three major campus events marked the Feast of the Three Hierarchs on Tuesday, January 30, the day that commemorates the patrons of our campus chapel—Ss. Basil the Great, Gregory the Theologian, and John Chrysostom. We honored the day by celebrating worship, spiritual instruction, and academic knowledge, all of which characterize the lives of the three bishops remembered on that feast.

The day began with His Beatitude Metropolitan Tikhon, primate of the Orthodox Church in America (OCA) and Chair of the Board of our Seminary, presiding at the Divine Liturgy. The theme of His Beatitude's homily centered on both a text from the Gospel for the day, "You are the light of the world" (Matt 5), and a text from the writings of St. Gregory the Theologian, "The mystery of godliness is for those who are willing, not for those who are overpowered." Joining His Beatitude in celebrating the liturgy were chapel clergy, and His Grace John, bishop of Worcester, and His Grace Anthony, bishop of Toledo, both of the Antiochian Orthodox Christian Archdiocese of North America (AOCANA). His Eminence Melchisedek, archbishop of Pittsburgh (OCA) also attended liturgy. 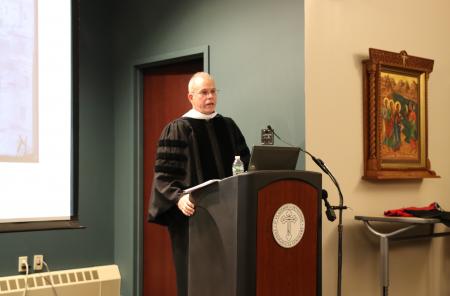 In the evening, seminary alumnus Dr. Scott Kenworthy presented the 35th Annual Father Alexander Schmemann Lecture, entitled, “St. Tikhon of Moscow (1865–1925) and the Orthodox Church in North America and Revolutionary Russia.” Dr. Kenworthy’s passion for his subject was infectious, and his expertise was evident throughout his talk.

"St. Tikhon is a particularly important and relevant saint for us,” said Kenworthy, “not only because he was one of the greatest visionaries when it came to planting Orthodoxy in North America—something he shared, of course, with Fr. Alexander Schmemann—but [also because he] faced all the complications of living in the modern world in religiously pluralistic environments and, of course, the most challenging of political environments imaginable."

Dr. Kenworthy went on to describe St. Tikhon’s pastoral responsibilities both in North America and Russia. He noted, in particular, St. Tikhon’s unique approach to church-state relations following the Bolshevik Revolution in Russia, and the saint’s insistence on keeping the Church out of political arguments and removed from political motivations.

Lastly, Dr. Kenworthy described the impact of St. Tikhon’s unique personality upon the people whom he shepherded. He was a person characterized not by fame or uncommon intellect but by simplicity, humility, kindness, and approachability—yet, he accomplished so much for the Orthodox Church in both North America and in Russia.

Listen to Dr. Kenworthy’s lecture in its entirety here. 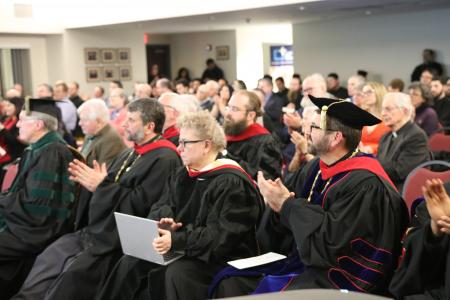 At Commencement, the graduates explained how the program had helped them to grow as pastors by allowing them to apply fresh ideas in current pastoral settings. One of the graduates, Fr. John Parker, said he had joined the D.Min. program in order to help him accomplish what every priest is called to do: “to become a Christian disciple—a student, a servant, a steward, and a sharer.” (View the Academic Convocation program here, which includes the final project title for each D.Min. graduate.)

Listen to the Commencement Ceremony and the speeches of the D.Min. graduates here.

At the conclusion of the lecture and Commencement, Metropolitan Tikhon acknowledged the influence that St. Tikhon’s visionary legacy continues to have on Orthodox Christianity in North America. He cited as proof the concelebration by hierarchs from the OCA and AOCANA at the Divine Liturgy that morning, together with the diverse pan-Orthodox composition of St. Vladimir’s Seminary on all levels (e.g., student body, Board of Trustees).

“St. Tikhon,” he remarked, “would perhaps be pleased that today, we have also, in a smaller and more humble way, gathered to hear the words offered to us by Dr. Scott [Kenworthy] and to rejoice in our communion with one another as the body of Christ—and through this gathering, to reflect upon the great accomplishments of our father among the saints, St. Tikhon, the Patriarch of Moscow and the enlightener of our lands.” Lastly, His Beatitude called upon the new “doctors” who graduated to transform their surrounding culture with their newfound knowledge, by bringing to others the gospel of Christ.

Learn more about Patriach Tikhon: St. Tikhon of Moscow: Instructions & Teachings For the American Orthodox Faithful. Read the full texts of Metropolitan Tikhon's homily at the Divine Liturgy for the feast, and his remarks at the D.Min. Commencement, which are posted on the website of the Orthodox Church in America, here.