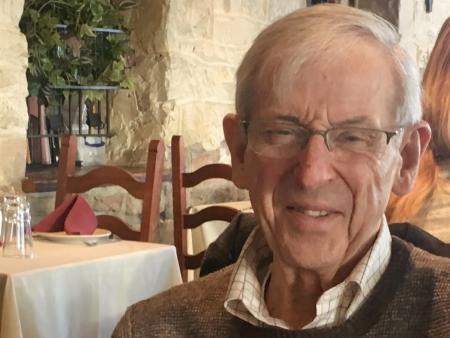 With faith in Christ and hope in the resurrection, we share news of the repose of St. Vladimir’s Seminary Trustee Emeritus Anthony Kasmer. Kasmer, of Newtown, PA, passed away Sunday, October 11 at the age of 90.

Kasmer was a faithful supporter and great friend of St. Vladimir’s Seminary. His twelve years of service on the Seminary’s Board of Trustees included three years as board treasurer and four years as the head of the Audit Committee. He also served as chair of the Finance Committee and advised the committee after he retired from the Board in 2016. Kasmer had said his most “memorable moment” as a trustee was co-chairing the Seminary’s 75th Anniversary Gala with Trustee Emeritus Alex Machaskee.

“I am so saddened by his passing,” said Seminary Chief Financial Officer Melanie Ringa. “Tony was a dedicated supporter of St. Vladimir’s and a good friend and mentor. He will be greatly missed. Memory eternal!”

“He was a man of faith dedicated to the work of the Church,” added Ted Bazil, St. Vladimir’s senior advisor for operations and planned giving. “Tony used his many talents to provide the Seminary with positive advice and direction even up until his repose. His example is a model for all board service. I will remember him for his generosity, quick wit, and wonderful smile."

Anthony Kasmer (center) with his wife, Ann, and Ted Bazil

May the memory of Anthony Kasmer be eternal!