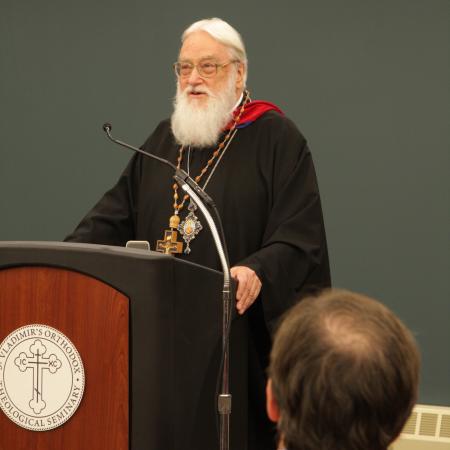 With faith in Christ and hope in the resurrection, we share news of the falling asleep in the Lord of His Eminence, Metropolitan Kallistos (Ware) of Diokleia, a leading Orthodox Christian theologian, teacher, and author.

His Eminence authored, among many other works, the immensely popular The Orthodox Way, published by St. Vladimir's Seminary (SVS) Press, and the Seminary was blessed to have him speak on campus on multiple occasions. In September 2011, the Seminary Board of Trustees and faculty bestowed upon Metropolitan Kallistos an honorary Doctor of Divinity degree in recognition of the many gifts His Eminence contributed to the Orthodox Church and to Christians worldwide.

Metropolitan Kallistos was born Timothy Ware in Bath, England, on September 11, 1934. He was raised Anglican but discovered Orthodox Christianity in his youth, and he was finally received into the Church in 1958, at the age of twenty-four.

In 1966, he was ordained to the priesthood and was tonsured as a monk, receiving the name Kallistos, in honour of St. Kallistos Xanthopoulos. The same year, he became a lecturer at the University of Oxford teaching Eastern Orthodox Studies, a position which he held for thirty-five years until his retirement in 2001. His Eminence was elected and consecrated titular bishop of Diokleia (of the Patriarchate of Constantinople) in 1982, becoming the first Englishman to be consecrated as a bishop in the Orthodox Church since the Great Schism of the eleventh century. In March 2007, the Holy Synod of the Ecumenical Patriarchate elevated the Diocese of Diokleia to Metropolis and Bishop Kallistos to titular metropolitan of Diokleia.

For many years following his retirement as a university lecturer, Metropolitan Kallistos continued to publish and to give lectures on Orthodox Christianity, traveling widely. He was considered by many to be one of the most important Orthodox Christian theologians of his generation.

May the memory of Metropolitan Kallistos be eternal!