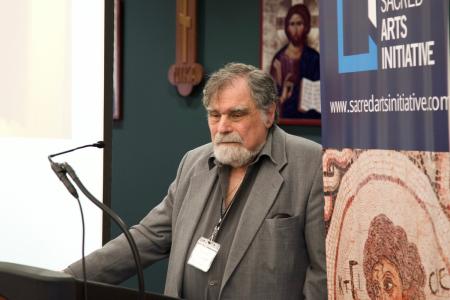 Richard Schneider (1938–2022) fell asleep in the Lord on the evening of November 11. Professor Schneider enjoyed a long teaching career, including two decades spent at St Vladimir’s Seminary as Professor of Hermeneutics and Liturgical Art. He was initially invited in 1995 by Fr Thomas Hopko to lecture on iconology, and, beginning in the 2001-2002 academic year, he returned every spring semester until 2019 to teach a variety of subjects, including iconology, hermeneutics, church history, and academic writing. His courses were perennially popular, and he opened up the eyes of many Christians to begin to read the iconography, architecture, liturgy, and tradition of the Church for themselves.

During his time at St Vladimir’s, he was a vital member of the community. Professor Schneider lived in the dorms, ate meals with students, led trips to museums and concerts in Manhattan, and always engaged seminarians in thoughtful and provocative conversations. He was notable in his dedication to students, and could be found at almost all hours either grading assignments or meeting with students to discuss their written work. He was beloved by generations of seminarians, advised dozens of theses, and encouraged many students to pursue further doctoral studies.

Professor Schneider lived a rich life. He was born into a Jewish family in St Louis, MO, converted to Roman Catholicism as a young man, and eventually joined the Orthodox Church. He completed his undergraduate studies at Dartmouth College in 1959, did graduate work in musicology at Princeton University (MFA ‘61), and in art history at Columbia University (MPhil ‘63).

In his academic career, Professor Schneider was primarily a professor of history and church history at York University in Toronto, with teaching stints at a few other universities before York, as well. He also established the program in Orthodox Theology at Trinity College, University of Toronto, where he taught until spring 2022. He represented the Archdiocese of Canada on the Metropolitan Council of the Orthodox Church in America, and served on the Canadian Council of Churches for decades,representing the OCA. He was devoted to the cause of Christian unity, and served as president—the first Orthodox president in its history—of the Canadian Council of Churches from 2003 to 2006. Above all, Richard Schneider was a man of deep, personal faith, who embodied and represented for many the gentleness, forgiveness, and love that he and they experience in Christ.

Professor Richard Schneider is survived by his wife, Lisa, and 7 children. May his memory be eternal!

All services for Prof. Richard Schneider will be held at St. Elias the Prophet Ukrainian Greco-Catholic Church and cemetery (10193 Heritage Road / Brampton, ON L7A 0A1). All who wish to say goodbye and pay their respects are welcome.

In lieu of flowers, Richard's family have expressed that donations to Holy Myrrhbearers Orthodox Mission, St Mary of Egypt Refuge, or St John the Compassionate Mission would be greatly appreciated.