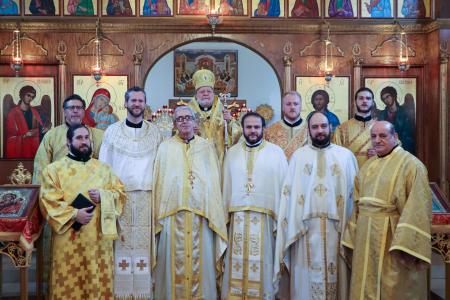 The St. Vladimir's Seminary community is celebrating the great blessings bestowed upon two of its own over the weekend: the elevation to archpriest of Alumnus Fr. Charles Baz and the ordination to the diaconate of Seminarian Andrew Salvia. The elevation and ordination took place Sunday, January 16 at Saint John the Baptist Antiochian Orthodox Church in Levittown, NY, by the hand of His Eminence, Metropolitan Joseph. 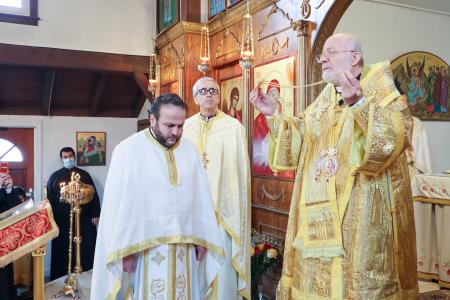 Archpriest Charles Baz graduated from St. Vladimir's Master of Divinity (M.Div.) program in 2000, and he returned years later to his alma mater as faculty to teach Byzantine Liturgical Chant Theory and intensive courses in the Arabic language for liturgical use. He currently serves as pastor of St. John in Levittown.

Following the elevation of Fr. Charles, His Eminence said that wearing the cross of the archpriest is a big responsibility, as the prayer of elevation says he must set a good example for his fellow servitors in the priesthood.

“The priesthood is not an employment, but a sacrifice,” said His Eminence.

At the conclusion of the diaconal ordination, His Eminence said that this lowest degree of the major orders is no less important than the priesthood and episcopacy. 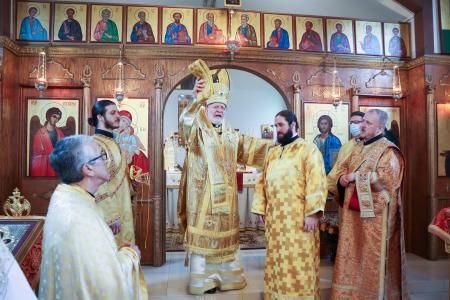 The Rev. Dn. Andrew Salvia is in his second year studying in the M.Div. program. He and his wife, Alethia, are parents of Giuseppe, Romano, Costa, and Giovanni.

May God grant Fr. Charles, Dn. Andrew, and their families many years! AXIOS!

Photos and sections of this article have been reprinted from Antiochian.org