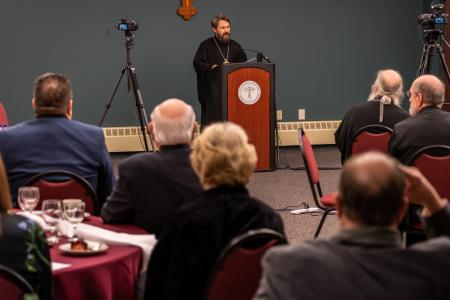 In celebration of his landmark, multi-volume Jesus Christ: His Life and Teaching (SVS Press), St. Vladimir’s Seminary hosted the author, His Eminence, Metropolitan Hilarion (Alfeyev), and several noted biblical scholars at the two-day event, Searching the Scriptures. The event was held on campus Thursday and Friday, November 11 and 12, 2021, and drew nearly 600 people from twenty-four countries around the world who either attended in person or signed up to watch online.

Searching the Scriptures’ lectures and discussions surrounding Metropolitan Hilarion’s six-volume work and New Testament scholarship more broadly led to fascinating exchanges between guest scholars—some of whom are Protestant Christians—and the author. The lively sessions invited the promise of further discussions to be hosted by the Seminary in the future, particularly surrounding attempts to find the “historical Jesus” and other aspects of New Testament scholarship in dialogue with the Orthodox tradition. The Seminary also plans to publish the papers presented at the academic conference in a forthcoming volume from St. Vladimir’s Seminary (SVS) Press.

A recording of Metropolitan Hilarion’s keynote and all lectures and discussions from the event will be made available on the Seminary’s YouTube page. 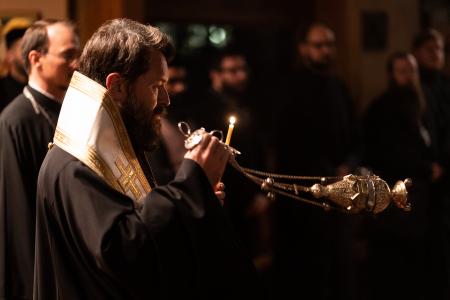 Searching the Scriptures began Thursday with Vespers at Three Hierarchs Chapel, immediately followed by a panikhida, presided over by Metropolitan Hilarion, on the occasion of the two hundredth birth anniversary of famous Russian writer and devout Orthodox Christian Fyodor Dostoevsky (Nov. 11, 1821­–Feb. 9, 1881). 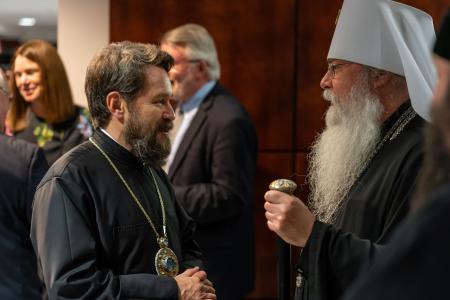 Metropolitan Hilarion discussed his monumental work, Jesus Christ: His Life and Teaching, and his desire to see a stronger Orthodox voice in modern biblical scholarship. In writing Jesus Christ, His Eminence explained he hoped to enrich his own understanding of the discipline in the process.

“I realized that I wanted to write a biographical study .... I wanted to approach Jesus precisely from the historical perspective, to show what kind of man he was, what his character was, how he reacted to other people, what his background was,” His Eminence explained. “The task that I set myself was not to expound Orthodox Christology, but rather to reproduce the living image of Jesus on the basis of the sources available and to present his teaching as it is reflected in the Gospels.”

His Eminence relied on patristic as well as modern New Testament scholarship in writing his volumes on Jesus. At the conclusion of his keynote, Metropolitan Hilarion offered an insight from Jesus Christ’s first volume:

The gospel story of Jesus Christ...may be compared, I argue, to a collection of treasures amassed over two thousand years in a safe with two locks...two keys are required. One key is the belief that Jesus was fully human, with all the aspects of a real, flesh-and-blood person. However, we need a second key also: belief that Jesus was God incarnate. Without this key, the safe will not open, and the treasures will not radiate with their original brilliance. The gospel image of Christ will not come to the reader in all its resplendent beauty. In modern New Testament scholarship, the [second] key is very often simply not used at all. In the Orthodox tradition, sometimes the [first] key is put aside, and we tend to concentrate more on the divine dimension of Jesus' life and teaching than on the human side of his story. This is one of the reasons why a dialogue between the Orthodox tradition and the rich and multi-layered tradition of modern New Testament scholarship can be mutually enriching for both sides.

Friday’s lectures and discussions offered an enticing glimpse into the possibilities of such dialogue, as some guest scholars offered both praise and thoughtful critique of the Jesus Christ volumes. His Eminence took time to express his appreciation of the scholars’ points and directly addressed some of the points raised, among them his criticism of the Q-Source Hypothesis proposed by many biblical scholars to explain similarities in the so-called “synoptic Gospels” of Matthew, Mark, and Luke. 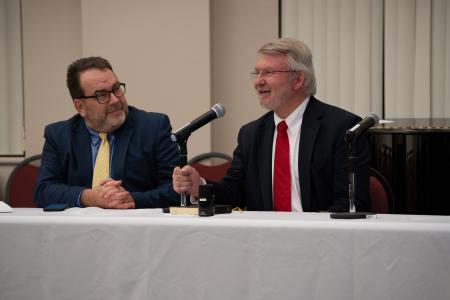 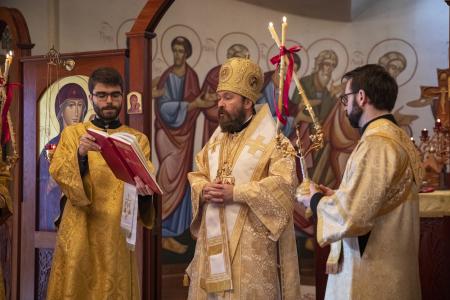 Although the academic conference of Searching the Scriptures came to an end Friday evening with final remarks from Metropolitan Hilarion, the celebration of Divine Liturgy the following morning brought the previous days of prayer, fellowship, and discussion to its perfect and fitting culmination. On Saturday, November 13, His Eminence presided over the Liturgy at Three Hierarchs Chapel on the Feast of St. John Chrysostom, one of the Three Ecumenical Teachers along with Ss. Basil and Gregory who are the Chapel’s patrons.

The Seminary community gives thanks to God for these edifying days. Beautiful concluding remarks offered by His Eminence, Metropolitan Hilarion point to the inspiration behind this and all the efforts of St. Vladimir’s—of her seminarians, faculty, staff:

ABOUT THE JESUS CHRIST SERIES

This six-volume work on the life and message of Jesus, in ongoing publication by St. Vladimir’s Seminary (SVS) Press, has been lauded by well-known scholars including Pope Benedict XVI, Metropolitan Kallistos Ware, Craig S. Keener, and many others. It is not so much for those Christians who are rooted in holy tradition as it is for non-believers, those who doubt and who are hesitant. In the first instance, it may give some answers to those who believe that Jesus never even existed. Secondly, it is for those who believe that Jesus existed but do not believe that he is God. Thirdly, it is for those who perhaps consider themselves Christians but relate to the Gospel narratives skeptically or view the Gospels through the prism of the criticism to which it was subjected in the works of Western specialists in the New Testament in the nineteenth and twentieth centuries. Ultimately, it attempts to answer the main question of what Jesus has brought to people and why he is necessary for people today.

Metropolitan Hilarion (Alfeyev) of Volokolamsk is the chairman of the Department of External Relations of the Moscow Patriarchate. He has authored numerous works on theology and church history, and is an internationally recognized composer of liturgical music. Several of his works are available through SVS Press, including his landmark Orthodox Christianity and Christ the Conqueror of Hell.