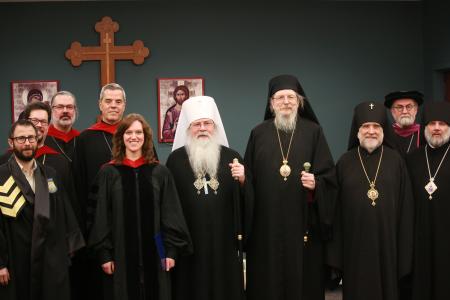 The day began with Hierarchical Divine Liturgy for the feast of the patrons of the Seminary’s campus chapel, Ss. Basil the Great, Gregory the Theologian, and John Chrysostom. His Beatitude Metropolitan Tikhon presided along with His Eminence Archbishop Michael of New York and the Diocese of New York and New Jersey, His Eminence Archbishop Melchisedek of Pittsburgh and Western Pennsylvania, and His Grace Bishop Daniel of Santa Rosa. Joining the priests and deacons from among the Seminary faculty and student body were OCA Chancellor Archpriest Alexander Rentel; Dean of Tikhon’s Orthodox Theological Seminary Archpriest John Parker; and Holy Trinity, Yonkers, NY Rector Archpriest Volodymyr Zablotskyy, who was serving at Divine Liturgy at St. Vladimir’s Seminary for the first time.

Following Divine Liturgy and lunch, the Seminary hosted three workshops Thursday afternoon focusing on the theme of autocephaly. Priest Anthony Roeber, the Seminary’s professor of church history, led the first workshop, “Autocephaly: The OCA, the Greek Archdiocese, and Antioch.” His eye-opening and candid lecture shed light on motivations and circumstances leading up to the granting of the Tomos of Autocephaly in 1970 by the Russian Orthodox Church to the OCA (then known as the Russian Orthodox Greek Catholic Church of America) and addressed the reaction of other Orthodox jurisdictions to the Tomos.

"At one level, we can argue the Tomos was a failure because it did not achieve all of the ends that autocephaly is presumed to serve,” said Fr. Anthony. “I will also argue that, in some respects, the Tomos granting was premature, and I will even more strongly argue that what came out of the Tomos is what's most important in the long run."

Listen to Fr. Anthony Roeber’s lecture in its entirety below.

Archpriest John Parker (SVOTS Class of ’04, ’18), who has served as chair of the OCA’s Department of Evangelization, led the next workshop, titled, “Autocephaly & Evangelism.”

"The change of the name of the autocephalous Orthodox Church in America [in 1970 from the Russian Orthodox Greek Catholic Church of America] was and is an indicator that this church is here for all….,” said Fr. John. "Autocephaly is an inner evangelism in reminding all Orthodox Christians that, in Christ, Jews and Greeks, Turks and Cretans, Romanians, Latinos, Africans, Asians all find true motherland in the nave and at the chalice."

Listen to Fr. John Parker’s lecture in its entirety below.

The final workshop was led by Bishop Daniel. His lecture explored the importance and canonization of North American saints including St. Herman of Alaska, who was canonized the same year the Tomos of Autocephaly was granted (but decided upon a year earlier). Bishop Daniel’s workshop, titled “Autocephaly & New Saints,” also touched upon the possibility of new North American saints.

"This decision to canonize St. Herman [a year before the granting of autocephaly] was a sign that the then-Metropolia...did indeed understand that it already possessed everything that was necessary for the fullness of Church life, and thus the autocephaly was the formal, canonical confirmation of that fact," said His Grace.

Bishop Daniel added there is ongoing discussion about potential candidates for canonization by the Orthodox Church in America, although no formal action has yet been taken, and there is much work that needs to be done before moving forward. He mentioned two of note among the candidates, Metropolitan Leonty (Turkevich, d. 1965) and Matushka Olga Michael of Alaska (d. 1979).

Listen to Bishop Daniel’s lecture in its entirety below.

"The Holy Synod continues to collect stories of the lives, intercessions, and miracles worked by God through these two servants of the Church,” said Bishop Daniel, “and the Church continues to reflect upon their holiness, the significance of their lives and example, and to prayerfully await the day when the Holy Spirit will indicate that it is time to move forward with formal canonizations."

In the evening, the 37th Father Alexander Schmemann Lecture was delivered by Archbishop Michael of New York and New Jersey, the secretary of the Holy Synod of Bishops and rector and professor of New Testament and pastoral theology at St. Tikhon’s Orthodox Theological Seminary. Archbishop Michael’s lecture, “The Gift of Autocephaly,” was a heartfelt, passionate reflection of the OCA’s legacy and purpose and how the OCA can take the lead in working toward pan-Orthodox unity in America.

council going to deal with it—the reality is, the Church has to be one."

At the conclusion of Archbishop Michael’s lecture, Seminary President Archpriest Chad Hatfield gifted a framed sketch of Fr. Alexander Schmemann, on behalf of the Seminary, to His Eminence. Archbishop Michael previously wrote about Schmemann’s impact on his own life and ministry in an edition of Jacob's Well, a publication of the Diocese of New York and New Jersey. “This will remind me to stay on fire,” His Eminence said as he received the gift.

Coinciding with the celebration of fifty years of autocephaly was the launch of preorders for a special, commemorative book edited by Seminary Academic Dean Dr. Alexandru Tudorie and published by SVS Press. The book, The Time Has Come, is expected to launch to the general public in the coming weeks.

Byrne-Martelli, a Board Certified Chaplain endorsed by the Antiochian Archdiocese, became the first woman to graduate from the D.Min. program in its current format.

“I appreciate how St. Vladimir's has been intentional about including men and women serving in all different types of ministries for this program….," she said.

Each of Byrne-Martelli’s fellow D.Min. graduates also spoke at the commencement ceremony. The final graduate to speak, Priest Theophan Whitfield, who also holds an M.Div. from St. Vladimir’s (’10), stressed how much he believed in the D.Min. program’s “dual-focus”: receiving wisdom as students from the faculty and convening as a cohort with other ministers to share experiences and discuss challenges in ministry.

"Pastors need to gather and share wisdom, because when that happens, the craft of ministry is improved, it's sharpened, and we are able to better go out into the world and face those challenges that we do, in fact, meet there," said Fr. Theophan.

The evening concluded with words from His Beatitude, Metropolitan Tikhon.

"Faith in Jesus Christ and a constant renewal of this faith is what we are called to do in the Church,” said His Beatitude. “For fifty years of autocephaly and, indeed, from the first days of the Alaskan mission, we have climbed this high mountain of faith. To the glory of God, we have also descended this mountain and labored in this land....

"To all who have labored, who are laboring, and who will labor, be assured that our Lord God will remember what has been done to His glory in the Church in this land."