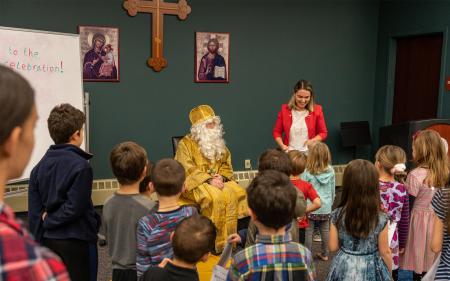 St Vladimir’s Seminary families gathered in the Rangos Auditorium on the afternoon of Sunday, December 4, in anticipation of a special visit from St Nicholas. Before entering the auditorium, children were instructed to take off their shoes and line them up against the wall in the hallway.

To start things off, Fr John Vazquez (M.Div.’23) read the story of St Nicholas and engaged with the children as they asked questions. At the end of the story hour, each child received $5 to give to someone anonymously, in the same way that St Nicholas gave to the needy in secret. Lindsey Birdsall (Josh Birdsall, M.Div.’23) then led the children in singing a few traditional carols about St Nicholas.

For the main event, St Nicholas (played by seminarian Josh Williams, M.A.’24) arrived in full festal array and visited with the children, who were then sent back out to the hallway, where they found gold coins and clementines in their shoes! The fun continued with hot chocolate and sweet treats, followed by some time to get creative with Christmas crafts.

To conclude the celebration of St Nicholas Day (organized by Denisa Tudorie), the Very Rev. David Garretsen and Matushka Shari gave out gifts to each child from the Fellowship of Orthodox Christian in America (FOCA).  Each year, FOCA arranges for different parishes to “adopt” a seminarian family, giving Christmas gifts to the children of students at St Vladimir’s Seminary, in appreciation for their commitment to future service in the Church.