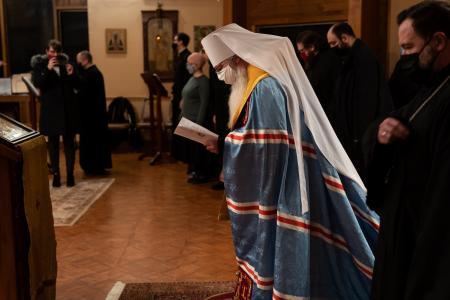 On Thursday, St. Vladimir’s Seminary took part in the Orthodox Church in America (OCA)’s Virtual March for Life, to rally against abortion and pray for the unborn.

The OCA’s Virtual March mirrored the March for Life in Washington, D.C. this year, which also moved online due to the COVID-19 pandemic.

Metropolitan Tikhon led a moleben at Three Hierarchs Chapel to begin the Virtual March for Life.

"The children destroyed by abortion have no action that they can take or voice to speak with,” said His Beatitude. “They have done nothing right or wrong. They have committed no crime. They have no power. They are truly the most vulnerable among us, and so it is up to us to act and speak for their protection.

“This is a sacred task…because God Himself is a protector—the Father of the fatherless and protector of widows; He is a rescuer, a savior, especially of the vulnerable."

Metropolitan Tikhon’s message was followed by a talk from Dr. Ana Iltis, professor and director of the Center for Bioethics, Health and Society at Wake Forest University and professor of philosophy at St. Vladimir’s.

"What actions will I take...," Dr Iltis challenged viewers, "to cultivate a life-giving and life-affirming culture, one in which abortion is not the answer to difficult questions pregnant women may face?"

Virtual March for Life host Fr. Thomas Soroka brought the event speakers together for a brief discussion before the conclusion of the March.

The Virtual March also featured words from His Eminence, Archbishop Michael and representatives from three pro-life organizations: Orthodox Christians for Life, Zoe for Life, and Vision for Life. The representatives described the work their organizations do to support pregnant women in crisis. They also challenged Orthodox Christians to get involved in pro-life work throughout the year, and offered examples of how to do so.

Watch the recording of Thursday’s Virtual March for Life below.