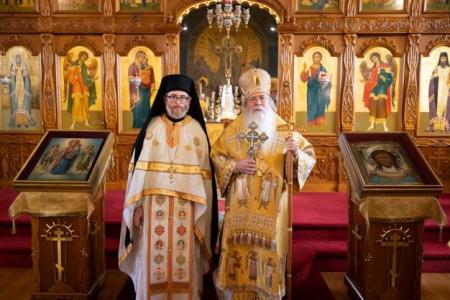 At its recent Regular Fall 2022 Session, the Holy Synod of Bishops of the Orthodox Church in America, meeting under the presidency of His Beatitude Metropolitan Tikhon, received the Albanian Archdiocesan nomination of Igumen Nikodhim (M.Div.’07) as diocesan bishop, made earlier this fall.

The Holy Synod decided to elevate Father Nikodhim to the dignity of archimandrite and named him administrator of the Albanian Archdiocese. On Sunday, November 13, during the celebration of the Divine Liturgy, His Beatitude Metropolitan Tikhon elevated Fr Nikodhim in rank according to the proper liturgical rites.

With regard to his nomination as bishop, the Holy Synod will take steps to canonically elect and ordain Fr Nikodhim to the episcopacy in September 2023. In the interim, His Beatitude named His Eminence Archbishop Mark of Philadelphia and the Diocese of Eastern Pennsylvania as the locum tenens of the Albanian Archdiocese.

Archimandrite Nikodhim was born and raised Nathan Preston in northern Idaho. For his B.A., he majored in Music and Classical Languages. He then completed an M.A. in Comparative Religion at the University of Chicago, continuing on to St Vladimir’s Seminary to begin his priestly studies and formation in the M.Div. program, and graduated in 2007. He then served as pastoral assistant and cantor at St. Nicholas Albanian Orthodox Church in Jamaica Estates, NY, while working in direct care as a social worker in Newark, NJ. Fr Nikodhim was ordained to the diaconate in 2009, and ordained to the priesthood at St. Nicholas by Archbishop Nikon (Liolin) of blessed memory in 2010.

Fr Nikodhim has continued to serve as rector and sole cleric at St Nicholas Albanian Orthodox Church since his ordination, while also taking on a number of other roles and responsibilities, including an appointment as Administrator of the Department of Pastoral Life, OCA, and as a board member of the Thriving in Ministry Program, an initiative launched by the Lilly Foundation, which aims to establish and facilitate small groups for bishops, priests and priests' wives.

In 2017, His Eminence, the Most Reverend Nikon, Archbishop of Boston and the Diocese of New England and the Albanian Archdiocese, tonsured him with the new name Nikodhim in honor of the Holy Martyr Nikodhim of Vithkuq and Berat. Fr Nikhodim was elevated to the honorary rank of Igumen (Abbot) in 2020 by Metropolitan Tikhon, Primate of the Orthodox Church in America..