More spiritual treasures from St. Isaac the Syrian are available in English for the first time. Saint Vladimir’s Seminary (SVS) Press has published Headings on Spiritual Knowledge, a translation from the recently discovered “Second Part” of St. Isaac's works.

Saint Isaac of Nineveh (7th c.), or Isaac the Syrian, is renowned for his spiritual writings. After only five months as bishop of Nineveh, he returned to a life of solitary stillness in the desert of modern-day Iran. His Spiritual Homilies (homilies 1–6 in PPS 11) quickly became treasured throughout the Christian world, not only inspiring monastic and spiritual life through the ages, but influencing culture more broadly, as in the works of Dostoevsky. 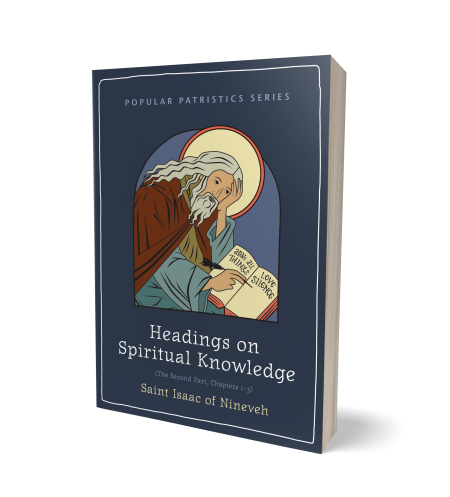 Yet many of Isaac’s works were lost for centuries. Scholars recently rediscovered the “Second Part” of his corpus in 1983. In this volume, renowned Syriac scholar Sebastian Brock translates the first three chapters of the Second Part, whose third chapter contains the Kephalaia Gnostika (or Headings on Spiritual Knowledge). They appear here for the first time in a complete English translation. Inspired by Evagrius’ work by the same name, Isaac composed the Headings as four centuries—that is, four sets of one hundred sayings or headings—on the spiritual life. These were “written above the lines in various places,” seemingly as a commentary or expansion upon the Spiritual Homilies (the “First Part”). Isaac discloses the realities of prayer and spiritual experience from their beginning to their most sublime heights and profound depths.

Headings on Spiritual Knowledge is available in paperback and eBook format. Buy online at SVSPress.com or by calling 1-800-204-BOOK (2665).