On the Synaxis of the Saints of North America, June 26, 2022, St. Vladimir's Seminary alumnus Dn. Aaron Rutz ('20) was ordained to the holy priesthood by the hand of His Eminence, Archbishop Mark. The ordination took place at Christ the Saviour Orthodox Church (Orthodox Church in America) in Harrisburg, PA, where the newly ordained Fr. Aaron is attached.

May God grant Fr. Aaron and Matushka Tatiana many years!

Saint Vladimir's Seminary graduate Aaron Rutz was ordained to the holy diaconate May 1, 2022 in Harrisburg, PA. His Eminence, Archbishop Mark presided over the Divine Liturgy and rite of ordination at Christ the Saviour Orthodox Church (Orthodox Church in America). 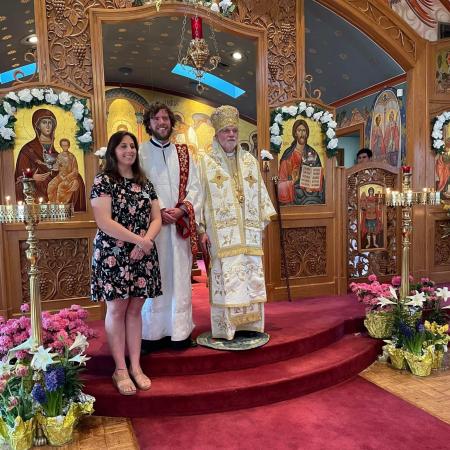 Deacon Aaron was raised in the Cincinnati area in a devout Lutheran family. He obtained a B.A. in theater arts and philosophy in 2012 from Sewanee: The University of the South (an Episcopalian school) in Tennessee.

Following his undergraduate studies Dn. Aaron visited theater groups internationally, thanks to a grant from the Thomas J. Watson Fellowship. While in Eastern Europe, Dn. Aaron spent countless hours awestruck in Orthodox Churches in Serbia and Bulgaria. He later rearranged his travel to be in Kiev for Holy Week and then visited a monastery in the Fagaras Mountains of Romania during the Paschal season.

Deacon Aaron began visiting Orthodox parishes on his return to the United States, and he was received into the Orthodox Church by chrismation at Holy Trinity Orthodox Church in Parma, OH.

May God grant Dn. Aaron and Tatiana many years!

Part of this article has been adapted from domoca.org.